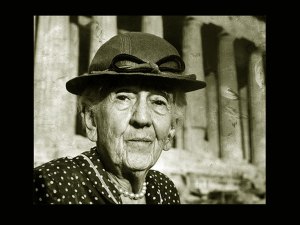 Who is the Edith Hamilton of the 21st century?

Last November, Donna Zuckerberg wrote an article in the TLS about Edith Hamilton, author of The Greek Way (1930) and The Roman Way (1932), two popular books that inspired millions of readers, among them Robert F. Kennedy, to appreciate Greek and Roman culture. Edith Hamilton was out-of-date when I studied classics in the late 20th century: a professor warned us against Hamilton’s sentimental translations of Greek tragedies.  “Perhaps he was jealous,” a friend later suggested.

But at the (low-paying) posh schools where I taught Latin for a few years after finishing grad school, I sometimes let my students sit and read bits of  The Roman Way (there were old copies in the classroom) after the rigorous exams that jangled their nerves.  They enjoyed The Roman Way, and what’s more, they understood it.  And that is the point, isn’t it? 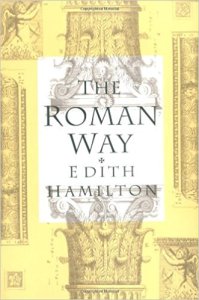 And so I was wondering as I mused on Edith Hamilton, Who are the popularizers of classics today? I came up with three names.

1.  Mary Beard, a classicist, professor at Cambridge, critic, and the author of several best-selling books, including Women & Power: A Manifesto and SPQR:  A History of Ancient Rome, is a celebrity.   She is the classics editor of the TLS,  a star of a BBC documentary on Pompeii and a series  on Rome, author of the popular blog “A Don’s Life” at the TLS, and a reviewer at the New York Review of Books, the LRB, and the TLS.

Her books are well-written, intelligent, and clear.  She is known for asking questions about accepted versions of Roman history. She is also often interviewed about politics and controversial issues on TV and the radio in the UK.  And she manages to be both popular and scholarly: that is a feat!  Is she the 21st-century British Edith Hamilton (only she gets respect)?

2.  Bryan Doerries is the founder of Theater of War and the co-founder of Outside the Wire,  two  groups that give dramatic readings of plays for soldiers, prisoners, and health professionals. He also translates Greek tragedies.

I admired Doerries’s All That You’ve Seen Here Is God, a collection of his “versions” of four tragedies:  Sophocles’ Ajax, Philoctetes, The Women of Traxis, and Aeschylus’s Prometheus Bound.

Doerries explains that he is not interested in literal translation, though he starts with the Greek text.   He writes that he is trying “to build a bridge between the ancient and contemporary worlds.”

He writes,  “Tragedy is an ancient military technology, a form of storytelling that evokes powerful emotions in order to erode stigmas, elicit empathy, generate dialogue, and stir citizens to action.  When you plug a tragedy into a community that is ready to receive it, the story does what it was designed to do.  Like the ancient Athenian audience in the Theater of Dionysus, the war-hardened Marines who gathered [at one of Doerries’s productions] knew the plays, not as representations of war and its aftermath, but as lived experience.”

His translations are spare and accessible, and the traumas of the heroes are vivid and moving to the military audiences.  What a brilliant approach!  I wrote a longer piece about his book here.  He has also written  The Theater of War: What Ancient Tragedies Can Teach Us Today– on my TBR.

And so he is a 21st-century Edith Hamilton!

3  Emily Wilson, a professor of classics at the University of Pennsylvania, was the first woman to translate Homer’s Odyssey into English.  She is the author of several other books, among them The Greatest Empire: A life of Seneca and Translations of four tragedies of Euripides, in The Greek Plays, Modern Library: Bacchae, Helen, Electra and Trojan Women.

Wilson was the subject of a profile in The New York Times Magazine last fall after the publication of her translation of the Odyssey.  And isn’t that unprecedented? Amazon was sold out of Wilson’s Odyssey after the profile was published.  I know, because I tried to buy it.

So is she a new Edith Hamilton?

Naturally, there are many, many brilliant classicists, but few manage to be both popular and scholarly. Do let me know any of your favorites.  Or if there are celeb popularizers/translators in other languages–French, Russian, German, Italian, you name it!–let me know.

Any translator of Greek tragedies for new audiences has to be bold.

I was intrigued by the boldness of Bryan Doerrie’s All That You’ve Seen Here Is God, a collection of new “versions” of four plays by Sophocles and Aeschylus.  He translated them for Outside the Wire and Theater of War, two groups that give dramatic readings of plays for soldiers, prisoners, and health professionals.  They also host discussions with the audiences. Doerries has translated Sophocles’s Ajax, Philoctetes, The Women of Traxis, and Aeschylus’s Prometheus Bound.

His translations are spare and accessible, if lacking in the poetry of the Greek. The traumas of the heroes are vivid and moving to the military audiences.

Doerries explains that he is not interested in literal translation, though he starts with the Greek text.   He writes that he is trying “to build a bridge between the ancient and contemporary worlds.”

Tragedy is an ancient military technology, a form of storytelling that evokes powerful emotions in order to erode stigmas, elicit empathy, generate dialogue, and stir citizens to action.  When you plug a tragedy into a community that is ready to receive it, the story does what it was designed to do.  Like the ancient Athenian audience in the Theater of Dionysus, the war-hardened Marines who gathered [at one of Doerries’s productions] knew the plays, not as representations of war and its aftermath, but as lived experience. 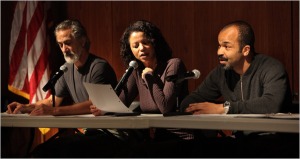 A Theater of War dramatic reading of “Ajax” and “Philoctetes”

So often Greek tragedies do treat issues of war and its consequences.  One of the most intense plays is Sophocles’s Philoctetes, in which the hero, Philoctetes, is abandoned by his fellow soldiers on an island. When Philoctetes stumbles into a shrine on the island, a snake (often a symbol of a god) bites him, and his screams and incurable stinking wound make him an unbearable companion and outcast.  Odysseus, the trickster “intelligence” officer, advises the Greek kings, Agamemnon and Menelaus, to leave him behind when they sail to Troy. Only Philoctetes’s bow makes it possible for him to survive on Lemnos alone.

He is forgotten until nine years later a seer, Helenus, tells the Greeks that they cannot win the war without Philoctetes and his bow. Odysseus plots with Neoptolemus, the son of Achilles, to trick and abduct Philoctetes.  But Neoptolemus reexamines his ethics after meeting Philoctetes.  And there is a deus ex machina, Herakles, who intervenes and explains what must the Greeks must do.

Doerries’s stark translation of the words of the compassionate chorus is very effective.  They know Zeus has been hard on criminals but Philoctetes has done nothing to deserve this.

But there is no story
I have ever heard
that matches the cruel
and meaningless fate
of this harmless man
who has done nothing
to deserve his pain.

I love this translation, but it is much simpler and shorter than the Greek. Here is a more literal translation of the same lines by David Grene, and the longer lines also look more like the Greek.

But I know of no other,
by hearsay, much less by sight, of all mankind
whose destiny was more his enemy when he met it
than Philoctetes’, who wronged no one, nor killed
but lived, just among the just,and fell in trouble past his deserts.

Grene captures the Greek more exactly, and naturally I prefer the poetry.

Sophocles’s Ajax is also a story of a hero who becomes an outcast due to illness.   In Doerrie’s introduction to Ajax, he focuses on the hero’s “mental disintegration” and the resulting violence, which he compares to similar incidents of madness and violence among Iraq vets.  (He cites an article in The New York Times.)  After the prize of Achilles’ armor is given to Odysseus rather than Ajax, Ajax intends to kill Odysseus and his men.  Driven mad by the goddess Athena, he slaughters cattle, believing they are Greeks.   How can he bear the dishonor after he sees what he has done?

Our home is
a slaughterhouse,
littered with cow
carcases and goats gushing
thick blood

Although the translations are short and effective, it is the introductions that mark Doerries’s intentions:  he is much more didactic than the Greeks.  (Is this an American thing?  Like Oprah?)  In Doerres’s introduction to Aeschylus’s Prometheus Bound, the story of the god who stole fire for man and then was punished by Zeus, he emphasizes the likeness of Prometheus to men and women who work in maximum-security prisons.  After performances for guards, social workers, and food-service workers in prisons, he says,

I have heard many audience members say, ‘I am Prometheus,” relating the stigma, societal judgement, and loneliness associated with their profession to the character’s solitary confinement.

The last play, Sophocles’s The Women of Trachis, is the least well-known. Heracles’s wife, Deianeira, is understanding when a beautiful woman, Iole, is brought home from the wars as “booty” (in both senses) for Heracles. But then, in the fashion of Medea, who sends her husband’s new bride a poison robe, she sends her husband a poison robe, which she has dyed with the blood of the centaur Nessus, who attempted to rape her and was killed by Herakles.  Deianeira did not, of course, intend to poison her husband: Nessus told her the blood was a love charm.   But in both cases  of Deianera and Medea, it is a younger woman who inadvertently causes the tragedy.  Burning with pain, Heracles wants his son to kill him.

The final lines of Heracles’s son’s last speech, addressed to Iole are missing from Doerries’s translation.  I have an uncorrected proof, so perhaps the lines were restored.  But Doerries reads this primarily as a play about euthanasia, and has presented it for health professionals.  Perhaps for his purpose, the last lines were deemed unneccessary.

Doerries, the founder of Theater of War and the co-founder of Outside the Wire, is a talented writer, with a laudable approach to the classics.  But I hope that university students still read the Greek and the more vivid translations by classicists  This would, however, make a very effective text for a high school or a community college, in addition to Doerries’s target audiences.