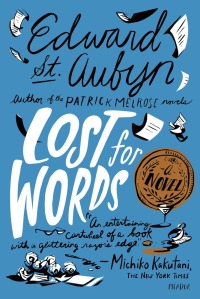 I recently purchased a paperback of Edward St. Aubyn’s novel, Lost for Words.  Why?  Because I liked the the cover art.  This slight novel is a satire of the politics of a literary prize–and what could be better summer reading, I thought, what with the Man Booker longlist coming up soon?

St. Aubyn is witty, but he is much more savage than he is comical. (In fact, the savagery is almost frightening.)  This glitteringly malevolent novel reads like a writer’s revenge.  And, no, in case you’re wondering, he has never won the Man Booker Prize.  Parts of his novel were obviously inspired by the 2011 Man Booker Prize debacle, when the chair of the judges, Dame Stella Rimington, former Director General of M15 and author of thrillers, made a gaffe:  she upset critics and readers by saying she was looking for readability.  (It doesn’t sound so bad in retrospect, does it?)

The British take the Booker so seriously–for months I am agog over a surfeit of information about the drama of the judges and the longlist and the shortlist.

The Elysian Prize is the name of St. Aubyn’s thinly veiled Man Booker Prize, which his stick-figure writer characters would kill to win.  Sonny, the wealthy Indian author of a self-published novel, very unamusingly plans to assassinate the chair of the judges when his book doesn’t make the longlist  Katherine, a  beautiful writer with multiple lovers, dumps two boyfriends over the prize:  the first, an editor whose  assistant mistakenly submitted a cookbook instead of her novel, and the second,  a boyfriend whose novel makes the shortlist.

Most comical are the unlikely  judges.  Unpromising and unliterary, but funny!  The chair of the judges is a Scottish M.P., who accepted the chairmanship “out of backbench boredom.” The other judges are Jo Cross, an outspoken newspaper columnist who values “relevance”; Tobias, a charming actor whose favorite is a pseudo-lyrical historical novel about Shakespeare; and Penny, who has retired from the Foreign Office and is writing bad thrillers with the help of software called “Ghost” which suggests hackneyed phrases like “ice water running through his veins” when you type in “assassin.”

Vanessa is the only literary judge, an Oxford academic.  Here is Malcolm’s reaction to her:

In the last analysis, Malcolm felt there was no harm in having one expert on the history of literature, if it reassured the public.

Now I admit that is funny!

Reading this short, uneven book is a bit like watching a Road Runner cartoon.  Will Wile E. Coyote explode the dynamite or not?  Only who IS the Road Runner?  And is it racist that the Indian writer is Wile E.?  Can you deconstruct it?   Although St. Aubyn is a highly-praised writer, there is no way I can recommend this book.