Pushkin’s Yevgeny Onegin and a Folio Society “Queen of Spades” notebook, with reindeer.

The Russians consider him their best writer.

After a a few days of barely looking up from Pushkin’s  Collected Stories (and you must read “The Queen of Spades,” a ghost story about a gambling grandmother), I decided to reread Eugene Onegin.

I first read Pushkin’s lively novel in verse in college, as did my husband. We lost our identical copies years ago, and have no idea what translation it was.  And then two years ago I got a hankering to reread it.  I picked up a new Penguin and enjoyed Stanley Mitchell’s elegant, charming translation of Eugene Onegin.

So why did I need Anthony Briggs’ new translation, Yevgeny Onegin?  Because Nicholas Lezard at The Guardian listed it as one of his favorite books of the year.

Although Briggs’ and Mitchell’s approaches to verse and word choice are different, both translations are readable. I wrote here in January 2015 about Mitchell’s translation:

In this brilliant novel in verse, Pushkin tells the story of Eugene Onegin, a rakish Byronic hero who, bored by carousing, wine, women, song, writing, and even books, moves from St. Petersburg to the country after inheriting an estate. He befriends a young poet, Lensky, to whom he is very devoted.   And yet he thoughtlessly wrecks their friendship by flirting at a dance with Olga, Lensky’s fiancée. The result is a duel with Lensky. (Eugene doesn’t want it, and yet somehow he doesn’t say no.) And the whole thing is complicated by Eugene”s rejection of Olga’s sister, Tataina, who writes a love letter to him.

The narrator’s voice is almost always ironic, and the poem mixes lyricism with realism. Olga soon forgets Lensky and marries someone else. Tatiana visits Euegene’s deserted house and falls in love with his library. Eugene only falls in love with Tatiana years later, after it is too late.

Briggs’ translation is intelligent, but less elegant than Mitchell’s.  That  is not, however, why I am giving it away to a lucky reader. (Leave a comment if you’d like it.)   It’s because  I DON’T LIKE THE DESIGN. The Pushkin Press book is small, pretty, and chic, but has smaller print than the Penguin and is somehow less comfortable to hold.   I had this same problem with the Dorothy Project’s chic edition of Barbara Comyns’ Who Was Dead and Who Was Changed, another  little square book. 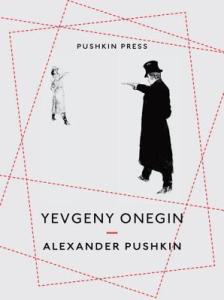 What I like most about  the Briggs edition is the scholarly introduction, which explains the history of Pushkin’s  invention of the Russian literary  language and his prosody, inspired by Shakespeare.

The writer’s greatest achievement, apart from the literary quality of his work as a whole, in which the disciplines of classicism mesh with new freedoms released in the age of Romanticism, is nothing less than to have reformed the national language.  This bold claim is no exaggeration.  As he grew up, the young Pushkin was presented with at least three different linguistic forces existing as separate entities in his large country .  Posh people spoke French, ignoring or despising ordinary Russian, though Pushkin heard a good deal of this tongue from the local lads and from his dear old nanny…(who makes an endearing guest appearance as Tatiana’s nurse in the third chapter of Yevgeny Onegin).  In addition, he was continually subjected in church and at school to the rich sonorities of Old Church Slavonic.  By some miracle, almost without thinking about it, he created modern Russian simply by using it, choosing at will between elegant Gallicisms, vernacular Russian and his nation’s equivalent of the King James Bible and Book of Common Prayer, with a sensitivity to sound, style and meeting that gives him an elevated place in the annals of linguistic reform.

If only I had taken better notes!

WHY I WISH I COULD LEARN RUSSIAN.

Why do Russian translations read so well?  I do wish I could learn Russian.  Translation (literally a “carrying across,” from the Latin transfero) is a precarious art:  it  captures sense but not sound, and only crudely suggests word arrangement, figures of speech and meter.

For years I devoted myself to classics and read little in translation.  Why?  Snobbishness and foolishness.  One of my best and most snobbish classics professors (and “classics professor” implies excellence and snobbery) used to tell us, ” You can’t do serious work in translation.”  I understand what he means–Mary McCarthy in The Groves of Academe also laughs at a student who writes her thesis on Broch’s The Death of Virgil, without being able to read Virgil –but where can we all find the time to be linguists?  I was committed  in grad school to eight to ten hours a day of ancient languages, studying for comps, and teaching  elementary Latin and a Virgil’s Aeneid independent study.   Learn Russian?  Forget it!

Fewer people in the U.S.  have opportunities to study foreign languages today.  The culture is now very business-oriented, and many colleges and universities are slashing humanities courses.  The state universities in the area are hanging on  by a thread to their language departments.   I do not expect this to get better under Trump’s rule.

Where I live?  All language departments eliminated at the local “private” university!

At my Big 10 university, we amused each other with what I call “smart-dumb”  chat.  Feminism was in, but bubbly blondism and dangly earrings were not out.  We Midwestern women had not gone to prep schools, we were studying hard for the first time, and we were neither pompous nor very competitive. When I went out for coffee at Things & Things & Things with a friend from Russian Literature in Translation, we chatted about Russian names.  (We were not Russian students.)

“How does one pronounce Knyazhnin?”

“I skip over the middle letters of the names and just see the K and N.”

I still don’t know how to pronounce Knyazhnin. He was a writer, an imitator of French tragedies and comedies, according to a note in the Penguin translation of Eugne Onegin.

Our effervescence over Russian literature came back to me  because I reread Pushkin’s Eugene Onegin (pronounced Oh-nay-gin) in Stanley Mitchell’s 2008 translation (Penguin).

It is just as much fun as it was the first time, in whatever edition that was.

In this brilliant novel in verse, Pushkin tells the story of Eugene Onegin, a rakish Byronic hero who, bored by carousing, wine, women, song, writing, and even books, moves from St. Petersburg to the country after inheriting an estate.  He befriends a young poet, Lensky, to whom he is very devoted, but thoughtlessly wrecks their friendship by flirting  at a dance with Olga, Lensky’s fiancée.  The fiasco results in a duel with Lensky.  (Eugene doesn’t want it, and yet somehow he doesn’t say no.)  And the whole thing is complicated by Eugene”s rejection of Olga’s sister, Tataina, who writes a love letter to him.

The narrator’s voice is almost always ironic, and the poem is a mix of irony with realism.  Olga soon forgets Lensky and marries someone else. Tatiana visits Euegene’s deserted house and falls in love with his library.  .Eugene only falls in love with Tatiana years later, after it is too late.

So what is love anyway?

I very much appreciate the introduction and notes when I read books in translation.  And yet there weren’t always notes in paperbacks then.  I’m sure I depended mainly on class notes.

In the Penguin edition, Mitchell has written an exceptionally good introduction.  He quotes a letter by Pushkin:

I am writing now not a novel, but a “novel in verse”–the devil of a difference.  Something like Don Juan–there’s no point in thinking about publication; I’m writing whatever comes into my head.

Pushkin, one of Russia’s most beloved poets, was of the second generation to write literature in Russian.  He took European themes and made them Russian.  Aristocrats spoke French before Russian, and literary Russian was “new” in the late 18th and 19th century.

But what I want to do is share my love of Eugene Onegin. (You can read the introduction and notes on your own.)   Whether you like reading about  bookishness, boredom, poetry, intensity, love, partying, rejection of all of the aforementioned, or strong women, it’s all here.

It is winter here on the prairie.  What better description can I find than in Eugene Onegin?

What pastime can you find that’s pleasing?
Out in the backwoods? Walking? Try.
For all the countryside is freezing.
The naked flatness tires the eye.
A gallop in the bitter prairie?
The very mount you ride is wary
In case its blunted shoe should catch
Against an icy patch.
Under your lonely roof take cover,
Let Pradt and Scott divert your mind
Or check expenses, if inclined,
Grumble or drink, somehow or other
Evening will pass, the morrow too:
With ease you’ll see the winter through.

I very much enjoyed it.  So entertaining!

But I can’t stress how important it is to have notes.  How did we survive in the old days when even Penguins seldom had notes?