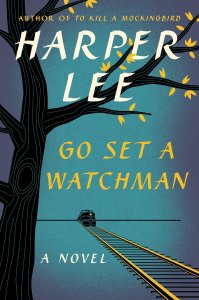 Will you be reading it?

Harper Lee’s Go Set a Watchman, a novel billed as a sequel to To Kill a Mockingbird, will be published on July 14.

It is the most pre-ordered book in HarperCollins history.

There has been plenty of controversy about the novel, though. According to an article in The Washington Post, people have questioned whether Lee’s lawyer, Tonja Carter, had the right to sell Lee’s early manuscript of a novel rejected in 1957.  Some of Lee’s friends have said they doubt whether 89-year-old Lee, who lives in an assisted living facility and allegedly is almost deaf and blind, would have approved the sale.  Lee always said she would never publish a second book.

But all is forgotten in this fast-paced world of pre-ordering (as opposed to ordering) and book parties!

It is Go Set a Watchmanpalooza out there!

Many independent bookstores are sponsoring events–but not here.

On July 13 in Saratoga Springs, the Northshire Bookstore  and the Saratoga Film Forum will co-host a screening of the movie To Kill a Mockingbird  and a dinner at a restaurant with Southern food. At midnight, the books will be handed out.  (The event is sold out.)

Barnes and Noble is also sponsoring activities.  On July 13, the chain will host an all-day readathon of To Kill a Mockingbird.   On July 14, the store will open at 7 a.m. and you can get free coffee with your copy.

In the UK, Sam Jordison, the energetic writer who leads the book group at The Guardian, will go to an independent bookstore at midnight to pick up a his copy and “liveblog” reactions to it.  He is leading a discussion of both To Kill and Go Set at The Guardian this month.

Heaven sakes!  But maybe I would go to a midnight party. No, I can’t ride my bike at that hour.

I’ve been reading about Go Set since February.  But I am just getting around to The Goldfinch.

David Ulin’s words in The L.A. Times reflect my own  feelings.

I’d be lying if I said I weren’t curious, but I’d also be lying if I didn’t admit that I met the news of its publication with a little bit of regret.

Why? Let’s just say that the release of any author’s early work is, at best, a mixed blessing — even in the best of circumstances. It can be revealing, yes, but it is also almost always reductive: a reflection of our desire to get closer more than any organic intention to listen or to tell.