The first amatory classic I read was Jane Eyre.  I don’t think Peyton Place,  The Robe, or Max Shulman’s Rally Round the Flag, Boys!, count, do you?  At 12, I was enthralled by Jane’s love for  Mr. Rochester.  I knew that one day I, too would fall in love with Mr. Rochester.  The operative word was “fall.”

But is “falling” love?

Amatory lit can be sexy.  But so often it is not quite about love.

Take two amatory classics I read recently.  They are about sex and passion, but love?

Book IV of Virgil’s Aeneid is one of the world’s most famous tragic love stories.  I reread it every year, preferably on the Mediterraean, actually at Ahkwabi State Park, since I never  find myself on the Mediterranean.  Dido, Queen of Carthage, is desperately in love with the Trojan hero, Aeneas, who is is driven off course to Carthage by a storm on his way to Italy.  There are many different interpretations of this elaborate, glittering poem:  it is the sympathetic portrait of a passionate woman, or a condemnation of a queen who puts love before duty, or a vindication of Aeneas’s obedience to the gods and devotion to the pursuit of power. It was the most influential Latin poem in the Middle Ages and the Renaissance,  the inspiration for Christopher Marlowe’s Dido, Queen of Carthage, Henry Purcell’s opera, Dido and Aeneas, Berlioz’s opera, Les Troyens (The Trojans), and innumerable works of art.

Dido is a powerful widowed queen in exile, building a new city for her people.  But in Book IV, she is obsessed with Aeneas, and fears it is disloyalty to her dead husband.  Virgil describes her love as a disease:  wounded by love, she feeds the wound.

One of the best translations of the 20th century is Rolfe Humphries’, which is close to the Latin and reflects the economy of the language. (I also love Robert Fagles’ translation, but he adds phrases that are not in Virgil.)  Book IV begins,

But the queen finds no rest. Deep in her veins
The wound is fed; she burns with hidden fire.

The Latin lines are alliterative and arranged in interlocking word order:  The second line of the Latin below shows the repeating v’s and c’s, as you can see here:

The balance and style of the poem are elegant and the plot is compelling, especially for women.    During a storm, Dido and Aeneas take refuge in a cave and make love.  Dido regards their relationship as a marriage.  But Mercury comes with a message from Jove, ordering him to go to Italy, reminding him he must found Rome for his son.  Aeneas prepares the fleet’s departure without telling Dido, but she confronts him.  After he leaves, she commits suicide.  And Virgil revives the images of the fire and the wound:   she builds a pyre, then kills herself by falling on his sword.

Virgil’s description of the end of her life is  grotesque.

And her wound made a gurgling hissing sound.
Three times she tried to lift herself; three times
Fell back; her rolling eyes went searching heaven
And the light hurt when she found it, and she moaned.

Traditionally, classicists speculate that the Romans would have mistrusted the love affair, comparing  the dalliance of Dido and Aeneas to that of Cleopatra and Antony. Antony’s affair with a foreign queen fueled a war and drove Cleopatra to suicide.  And Augustus had defeated Antony, and Virgil was a patriotic poet, very much Augustus’s poet.  So would the audience  at Virgil’s poetry readings have approved Aeneas’s flight from Dido?  Or would the women have been fuming?  Should we be postmodern? Or traditional?

Love is a wound. 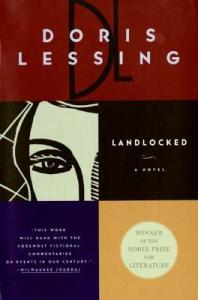 Landlocked, written after her masterpiece, The Golden Notebook, which certainly taught Lessing how to write about love and sex, is the most polished novel in this series.  Set during World War II, Martha waits in Africa for the end of the war to divorce the husband she married for political reasons.  She  left her first husband, a civil servant, and their daughter Caroline to  become a Communist activist and support herself as a secretary.   She made the disastrous marriage to Anton Hesse, a communist refugee from Germany, so he would not be interned in a camp or deported.  Anton is terrible in bed, they have no chemistry, and Martha insists on having affairs, reminding him that they are not really “married.”

The political climate changes, the town again become hostile to the left, and the communist group is unraveling..

But the most important aspect of the novel is Martha’s discovery of sex.   Tomas, a Polish Jew, a farmer, and a communist who simply loves women, introduces her to great sex.  She has never been happier. But the affair is a brief idyll, and she knows it.  He will not leave his wife, and is determined to go back to Europe.  She will go to London.

Nothing can wipe out the memory of violence.  Martha is  aware that if he had not left Europe with his wife, he would have died.

If he had not–well, none of his family was left alive, several dozen brothers, sisters, cousins,, relations–they were all dead, they had died in the gas ovens, on the gallows, in the prisons and the concentration camps in those years of our Lord, 1939-1945.   But here Thomas was alive.  And all her life Martha would say to herself–whatever else had  been untrue, whatever else had not existed, this had been true:  this was true, she must hold on to it, even though, when she touched Thomas it was with the anxiety that related not to Thomas now and here, but to the scene she could create by a slight dislocation in her mind: Thomas very nearly had not left Poland.

This is a gorgeous novel, with some of Lessing’s best writing.  It is the gateway to the experimental, genre-busting fifth book in the series, The Four-Gated City, which is actually my favorite.

It is so good to see Martha happy.  So much lies ahead of her after the war, when she goes to London.