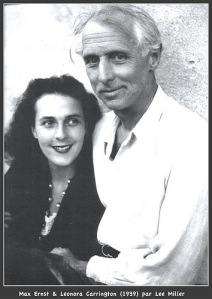 It is the centenary of the surrealist painter and writer Leonora Carrington’s birth.

But her book Down Below is a very different story:  a memoir of madness more or less lost in translation.  (Some call it a novel.)  It was originally  written in English, then rejected by Janet Flanner, then lost by Carrington; then in 1943  she dictated it in French to Jeanne Megneb; and then n 1944 it was translated into English by Victor Llona  for publication.  (The NYRB  text was compiled from both the French and the English translation.) 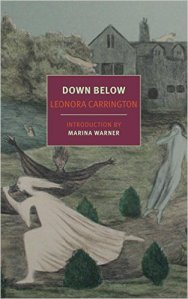 Written in the form of a diary, Down Below is a brief account (68 pages) of Carrington’s nervous breakdown and painful stay in a Spanish mental hospital in 1940.  She had been living in the south of France with her lover Max Ernst, who was captured by the Nazis and incarcerated in a concentration camp.  She  fled  across the border from France to Spain with friends.  Terrified and exhausted, she suffered a complete psychotic break.

Although her description of terrifying hallucinations and delusions is poetic, the experience was traumatic.  She writes,

We were riding normally when, 20 kilometers beyond Saint-Martin, the car stopped; the brakes had jammed.  I heard Catherine say:  “The brakes have jammed.”  “Jammed!”  I, too, was jammed within, by forces foreign to my conscious will, which were also jamming the mechanism of the car.  This was the first stage of my identification with the external world.  I was the car.  The car had jammed on account of me, because I, too, was jammed between Saint-Martin and Spain.  At that time, I was still limited to my own solar system, and was not aware of other people’s systems, the importance of which I realise now.

If you or a family member have suffered from a mental illness*, you will find this book  painful.  You will wearily  recognize  the symptoms (though for what illnesses, is never clear:  major depression overlaps with bipolar disorder overlaps with schizophrenia overlaps with…).  Carrington sparely shows the reality of psychic wounds, yet her vivid account of illness and a scary hospitalization l seems almost unclouded by emotion.

There are better memoirs of mental illness.  Carrington’s lacks context.  William Styron’s Darkness Visible:  A Memoir of Madness is a classic; so is Ken Kesey’s novel, One Flew Over the Cuckoo’s Nest (Kesey’s psych hospital is also a metaphor for the machinery of society). Carrington’s  poetic yet realistic and muted description of symptoms is very upsetting:  I have never heard them described with such detachment.

Carrington reminds me of a relative  I will call “Zelda,” who was diagnosed with bipolar disorder, and did not speak, eat, or bathe for three weeks in the hospital after a complete psychotic break. She stood paralyzed, mute, in front of the locked glass doors to the courtyard, staring at the heaps of snow.  She believed she had caused the blizzard. Her mind was that strong (or weak, if you prefer).  While “solving” the catastrophe of “contaminated nuclear snow”, she drank water out of styrofoam cups,  hoarded them in her room, left different levels of water in each cup, arranged them on her bedside table like models of atoms (she said later), and tried to work out how to “decontaminate the snow.”

“I was a nuclear physicist and the cups were atoms,” she said later, laughing.  Do not show pain.  That is the Code of the Woosters.  Or do I mean ours?

And things did not go that differently for Carrington, though the facilities and treatment were more primitive then.  Having suffered a psychotic break, she was locked up in a mental hospital  in Spain.   She begged to move to the ground floor, which she called “Down Below,”and believed was, relatively,  Paradise.  Meanwhile, she had to solve the problems of the universe between injections and other  treatment.  LIke”Zelda,” she was responsible for the world and terrified of her power.

…back in my bed, I would sit up again very straight and examine the remnants of my fruit, rinds and stones, arranging them in the form of designs representing as many solutions to cosmic problems.  I believed that Don Luis and his father, seeing the problems solved on my plate, would allow me to go Down Below, to Paradise.

The treatment was dreadful:  she was given injections of a drug called Cardiazol that mimicked shock treatment. She did not quite know where she was.  She did not understand who the people were.   Undoubtedly pills are better these days.  Still inadequate, but better.

Eventually Carrington’s rich English parents sent her old nanny by submarine to Spain to take care of her; Carrington might have mouldered in the hospital forever had Nanny not arrived. The plan was to send her to another hospital in South Africa for the duration of the war.  Carrington ran away to the Mexican embassy in Lisbon and married in order to escape from Europe to New York and eventually to Mexico.

Down Under starts out strong, but the  narrative loses impetut and becomes repetitious:  even 68 pages is too long for a translated dictated remembrance of madness without context.

But look at Carrington’s paintings and read her fiction.  And when you run out, turn to this strange, uneven little book.  You might like it more than I did.

*According to the Substance Abuse and Mental Health Services Administration (SAMHSA), approximately 9.3 million adults, or about 4 percent of Americans ages 18 and up, experience “serious mental illness” every year.