I keep a book journal, but do not have a TBR.  I buy books, I put them on shelves, I take them off shelves, I find I am not in the mood, I put them back for a year or ten years, I take them off the shelves again, and eventually I read them. Are people with TBRs more organized?  When I do plan, the dates are flexible.  Last spring I meant to reread Daniel Deronda, but didn’t get around to it till  fall.  Did it matter?  Not at all.  And did I hurry through 800 pages?  I did not.  George Eliot’s prose is buoyant and rich in texture, lush and leisurely.  Festina lente (“Hurry slowly”),as the Roman proverb says. 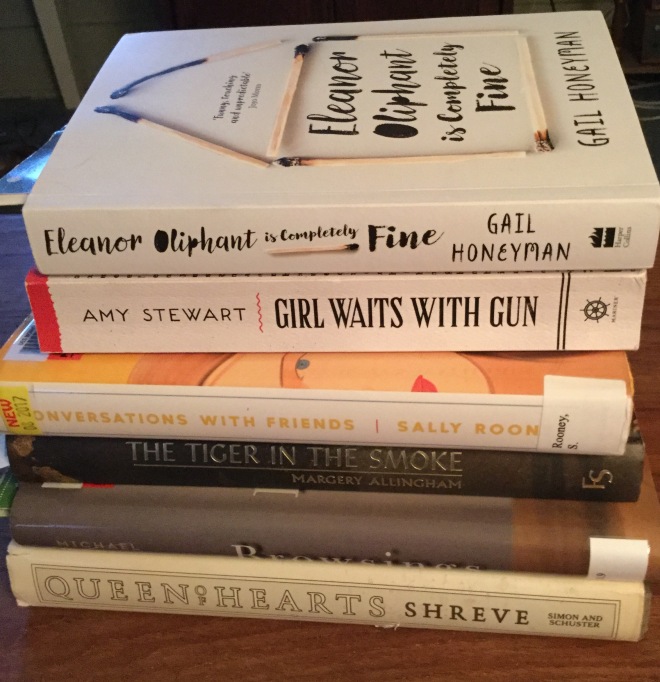 Not everyone shares my serendipitous style of selection, though. We don’t all have to be the same:  I very much like other people’s TBRs!  And so this post is a homage to pictures of  bloggers’ TBRs, which I always love, and to the “vloggers” at Booktube who show books to the camera and say they plan to read them. (Now that is a bit weird!)  The photo above is of what passes for my TBR (though I am committed to reading other books currently, so this TBR is in flux).  I have started some of these, so I can decide which to finish, and which to reject.

1.  Gail Honeymoon’s Eleanor Oliphant Is Completely Fine.  Everybody has read this except me, yes?  I have read 50 pages, and it is well-written.  Initially I thought it might be like Barbara Pym’s Quartet in Autumn, only Eleanor Oliphant is a 30ish eccentric heroine with a dead-end job in an office, not an elderly woman about to retire. But Honeymoon’s novel is both lighter and more issue-oriented:   The victim of some kind of abuse, Eleanor has scars all over her face but says she “is completely fine” without having any friends. And then, at  a concert, she is smitten by a musician, and buys a computer to stalk him online.  She plans to meet and seduce him and even gets a bikini wax.  But her most likely friend?  The nice, dull guy from the IT department.

I’m of two minds about this:   I do feel I read a very similar American novel in 2015 or 2016.  I actually blogged about it, but don’t remember the title.  It wasn’t very good:   the story of a obese woman who is completely alone until a kind woman befriends her–and naturally she blooms.  Gail Honeymoon’s novel is much more sophisticated.  I am not very intrigued by the story, though.

2.  Amy Stewart’s Girl Waits with Gun.  This is a Christmas present from a friend with very good taste.   And I loved Stewart’s nonfiction book about earthworms, The Earth Moved.  This mystery, set in 1914,  is based on the real-life Kopp sisters: Constance Kopp became of the nation’s first female sheriffs, after the sisters survived a shoot-out at their farm.  This is another of those books everyone loves, and  the opening pages are addictive.  AND SO IT WILL BE READ.

3.  Sally Rooney’s Conversations with Friends. I read an article in The Guardian about publishers’ favorite books of the year:  Alexandra Pringle at Bloomsbury recommended Conversations with Friends.  I’ve read 62 pages of this beautifully-written little book, and it slightly reminds me of Barbara Trapido’s comic novels, only it’s aimed at Millennials and written by a Millennial.  The narrator, Frances, a poet who performs poetry at bars with her best friend Bobbi, develops a tangled relationship with a married actor, the husband of a woman who is writing a profile about Frances and Bobbi.   I’m of two minds about this:  I’m not its target audience, and I do not relate to the characters.  But  I will PROBABLY finish it because it’s blessedly short.

4.  Margery Allingham’s The Tiger in the Smoke.  It’s a Golden Age Detective Story, and I love Allingham.  It is not her best but very exciting!  I’m a fan of her hero Albert Campion, so I’ll finish it.

5.  Browsings, by Michael Dirda, the Pulitzer Prize-winning book critic for The Washington Post, is a collection of essays which he wrote originally for the homepage at The American Scholar. He is obsessed with collecting books, carries a notebook on walks, and tells us which notebooks he prefers (not Moleskines), lists titles of books about books, and guides browsers at a famous book sale at Stone Ridge School of the Sacred Heart to learn which books are collectible and valuable.   Yes, I will finish this book, and it would make a great Christmas gift.

6.  Susan Richards Shreve’s Queen of Hearts.  I absolutely loved this well-written novel when I read it in the ’80s, and am loving it again.  It’s a moving tale with a hint of magic realism, set in a small town in Massachusetts.  The heroine is beautiful, kind, and has second sight, but on the eve of her wedding, an unforeseen incident occurs: she finds her fiance with another woman, and she kills him. What will she do with this secret?   The very talented Susan Richard Shreves is one of my favorite novelists. She bridges the gap between literary and popular fiction, and this is thoroughly enjoyable.