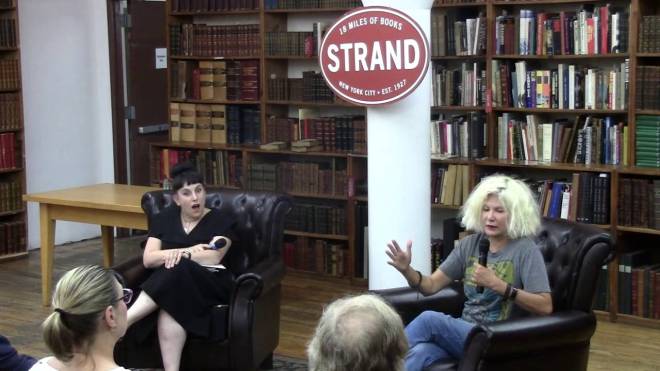 I am enjoying Tama Janowitz’s entertaining new memoir, Scream, which has a lot in common with stand-up comedy.  Janowitz is best known as a Brat Pack writer in the ’80s (along with Jay McInerney and Bret Easton Ellis) who became famous overnight for her short story collection, Slaves of New York, which was later adapted as a Merchant Ivory film.  But life wasn’t always easy:   She was raised in semi-poverty by her mother, the poet Phyllis Janowitz, because her father, a pothead psychiatrist,  wouldn’t pay child support.  Janowitz grew up smart and stylish:  she went to Barnard College in New York, spent a junior year abroad in London, where she failed to recognize the talent of the Sex Pistols,  studied with Elizabeth Hardwick both at Barnard and in the MFA program at Columbia,  and finally publishesd by submitting a  story to The Paris Review under a male pseudonym, Tom A. Janowitz. 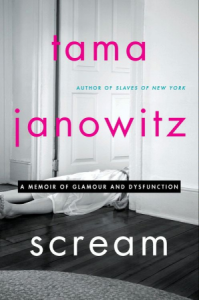 She also felt she was following in the footsteps of Sylvia Plath in 1977  when she won a contest to be a guest editor at  Mademoiselle, as Plath had done in the ’50s.  Janowitz expected her experience to be like Esther’s  in The Bell Jar.  Unlike Plath, she is sent to a photoshoot,  where she is commanded to iron a white satin blouse, “much nicer than anything I had ever had or seen.” How on earth do you iron a satin blouse?   Janowitz gamely tries, but she burns the blouse.

Would this have happened to Sylvia Plath?  She had been a guest editor and went to dance with Yale men on the roof of the St. Regis hotel during her time at the magazine.  There was no mention in The Bell Jar of being sent out to iron.  But if she had been, she would have ironed beautifully, I am sure.  My life and my future career possibility  were over.

Later, she is unable to get even an entry-level job at Conde Nast, so she  goes home to “Mom’s bleak little tract house by the interstate highway outside of Boston.” Her mother comforts her .

My mother was indignant that my job had been to iron.  “You’ve never been able to iron!”  But she suggested I write a letter to the editor apologizing and explaining how this terrible incident had occurred.  We wrote it together.  It started out reasonably, and then, as the two of us perfected it, became a masterpiece easily equal to Eudora Welty’s “Why I Live at the P.O.”

And the letter is truly hilarious.  You’ll just have to read it!