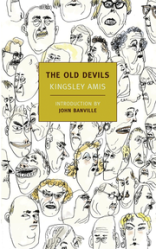 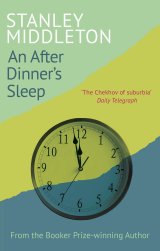 How old are you?  Rude question, isn’t it?  Tempus fugit.

The seasons go faster and faster. Yes, it’s fall–again! There are pumpkins at the grocery store and the homemade ice cream stand has closed for the season.

And since I seem to get older every year, I ponder on aging in literature.  Is  it harder for men or women?  And isn’t it odd that the two women’s novels above, Fear of Dying and The Summer Before the Dark, have dark covers and titles, while the men’s novels about aging, The Old Devils and An After-Dinner’s Sleep, have light green on the covers?

Aging women in literature face the challenge of losing the power of their sexuality.  In Erica Jong’s Fear of Dying, a brilliant novel about aging, sex, and death, sixty-year-old Vanessa, a retired actress who played a villainess in a soap opera, hates the thought of being past her prime. She has had plastic surgery, but misses the days when men ogled her.  Her rich husband, Asher,  is in the hospital after an aneurism. When she is not at the hospital, she is visiting her parents,  who are in their nineties and not always cognizant of who she is.  They have 24-hour caregivers and are dying in their apartment when they are not ill in the hospital.

You know what Vanessa badly needs?  Sex.  Who can blame her for looking at Zipless.com?  But does it turn out well?  Of course not.  Still. she comes to terms with what she wants from life.

In  Doris Lessing’s The Summer Before the Dark, the forties prove just as difficult as the sixties. The 45-year-old heroine Kate comes to term with middle age. Her husband is away in America for the summer (and having an affair), and she had planned to stay home with their son.  When her son takes off on a trip, she accepts a summer job as an interpreter at a food conference.  She has bought beautiful clothes and is newly attractive; she has an affair, which is nice, but ephemeral.  Later, after the conference, she has a kind of controlled breakdown in a rented room in a young drug-taking hippie’s house.   Kate lets her hair go and experiments with walking  in front of construction workers in different outfits. Naturally, they whistle when she looks young, and ignore her when she wears baggy clothes. By the end of the summer she knows herself and returns to her family.  She stays the same for her family–except for her hair, which she stops cutting and dying. This is a beautifully-written short book, one of Lessing’s best.

Is aging easier for men? Well, no, judging from literature.  In Kingsley Amis’s Booker Prize-winning novel The Old Devils, one of the aging characters has a difficult time dressing himself but he still imbibes an incredible quantity of alcohol with his friends.   In Stanley Middleton’s brilliant novel, An After-Hour’s Sleep, the 65-year-old protagonist, Alistair, is mature:  he feels that he is getting old, mainly because he is retired and feels stiff after walking several miles.  He he not only meditates on the past, but embarks on a friendship with an ex-girlfriend.  And he finds a new purpose through writing.  Like Jong’s Vanessa and Lessing’s Kate, he comes to term with aging.

I wonder if I can count E. F. Benson’s Lucia books as novels about aging?  Probably not, but the characters are not young.

What are your favorite novels about aging?

Stanley Middleton won the Booker Prize in 1974 for Holiday.

On a jaunt to London, I discovered his books at Waterstones. I wondered, Why haven’t I heard of him before? But Middleton’s work is not widely acclaimed in the U.S.   A critic at The New York Times in 1989 called Entry into Jerusalem a “tight-lipped novel by the prolific British writer” and further said “This mannered repression leaves much space in the novel for the author to fill with tedious detail.”

My favorite novel of the year!

It is exactly my thing!  I adore British repression. I love Anita Brookner, of whom Middleton slightly reminds me, Kazuo Ishiguro, and A. S. Byatt.  In fact, these British writers represent the pinnacle of 20th-century British literature to me.

It is true that Middleton’s remarkable novel, An After-Dinner’s Sleep, which was published in 1986, is quite buttoned-up. And I love it!  The protagonist, Alistair Murray, a 65-year-old widower, has a lot of time on his hands.  He loves music and plays Bach on the piano, reads widely, and takes long walks.  He is a retired Director of Education who was once a powerful man in the Midlands. Now he must shape his days by routine activities.  And he is sitting alone one night when Eleanor Franks, with whom he had a brief sexual affair years ago, shows up at his house.

Middleton’s writing is brilliant but not showy.  The first exchange between Alistair and Eleanor subtly reveals their disparate characters.

‘I’m not interrupting anything important?’

‘You’re not interrupting anything. I was sitting here reading, but if you questioned me I’d have some difficulty recalling what it was. There’s nothing I want on the telly, and the Prom’s full of stuff I don’t want to hear. When I was young Friday night was Beethoven.’

‘And Amami,’ she said. ‘A shampoo.’ She giggled, but her face straightened at once.

Eleanor is an impulsive socialite lacking compelling interests. She claims she has dropped in because she is disturbed by a news item.  But  it becomes clear that it was an impulse, perhaps born of loneliness.  Eleanor, too, is a widow.

Middleton’s quiet descriptions of daily life fascinate me. Every word is carefully chosen, and the characterization of Alistair reveals a capable man who is trying to find his way alone in old age.  He misses his wife, Janet, an ambitious woman who pushed him into his successful career, which he is convinced was over-valued and riddled with mistakes.  He escapes self-deprecating rumination  by spending time with his son, Sebastian, a famous TV journalist, and his wife Francesca, a lawyer.

Eleanor is an important character, but not the center of his life. He is too cautious; she is too flighty. Alistair and Eleanor begin an off-again, on-again friendship.  She drinks too much, invites him over to help entertain her older sister, who is dying of cancer, and accompanies him to a classical music concert where Alistair is uplifted and she is obviously bored.  Quite often she takes off on impulse to stay with friends in Portugal or France.  But Alistair is used to solitude, and he disciplines himself to study various subjects.  He is writing an article about education, which is not going well; Middleton’s description of writing gone amok is pitch-perfect.  (Haven’t we all been there?)

I love Middleton’s wit.  When Eleanor’s sick sister retires to bed with Mansfield Park, Eleanor asks Alistair, “Would you choose Mansfield Park if you were dying?”  (No, I would not!)

And the title comes from Shakespeare’s Measure for Measure:

Thou hast nor youth nor age
But as it were an after-dinner’s sleep
Dreaming on both.