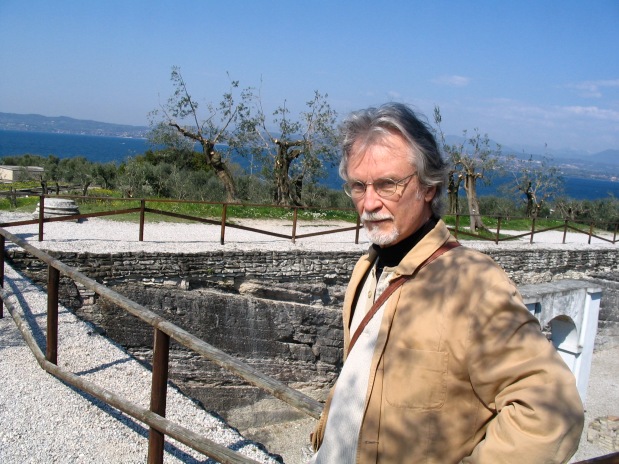 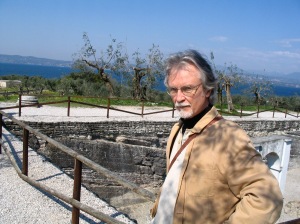 My background is in classics, and I taught Latin after graduate school.  So when I tell you that Robert Hellenga’s brilliant novel, The Confessions of Frances Godwin, is the story of an extraordinary Latin teacher, you will not be surprised it is one of my favorite books of the year.  Frances, the witty narrator, who retires after her popular Latin program is phased out, decides to write her confessions, which, she says, are “really a kind of spiritual autobiography.”  She adds that the police are unlikely to come knocking at her door, and she is not joking. Frances has a crime on her conscience.

Hellenga, a professor emeritus at Knox College in Galesburg, Illinois, has generously agreed to be interviewed about this contemporary woman’s version of Saint Augustine’s Confessions.   I am very grateful for his thoughtful answers.  Thank you, Bob.   (N.B.  You can read my post on his  novel here.)

An Interview with Robert Hellenga

Mirabile Dictu: The love of classical literature has shaped the identity of the narrator, Frances, a brilliant Latinist whose translation of Catullus has been accepted for publication. Why did you choose to make Frances a classicist, and is this an integral part of her character?

Robert Hellenga:  I like to use the classical world as a frame of reference. It give us (me, Frances, the reader) a place to stand outside the modern world. Other things being equal I would have gravitated toward a college Greek professor rather than a high school Latin teacher, but I’ve already written a novel about a college Greek professor (The Fall of a Sparrow), so I didn’t want to do that again. I’ve studied Greek and Greek literature, but not much Latin or Latin literature, so I had to work up a “frame of reference” that resonated with me. So I reread Virgil and Catullus. The Aeneid gives us a sense that with the founding of Rome the world has turned a corner, that history has a sense of direction (as opposed to the Greek view that history just goes round in a circle). This is a view that Frances has to abandon at the end, when Father Viglietti tells her that what she needs is no absolution but a grappa and a nap. Catullus is already closer to this view. My wife and I have lived in Catullus’s home town (Verona) and last year we spent six weeks in Rome, so I had a sense of place to draw on in both cases.

Mirabile Dictu: I’m always interested in novels with Midwestern settings, because I’ve lived most of my life in the Midwest; yet there seem to be few Midwestern novels. Were you making making a radical decision by setting a novel in Galesburg, Illinois?

Robert Hellenga:  The Midwest has been a theme in all my novels, generally in contrast to Italy. Our family spent a year in Florence in 1982-83 and it was a turning point in our lives. It’s hard for me to write a novel in which no one goes to Italy, although in Snakewoman of Little Egypt the protagonist, Sunny, goes to France rather than Italy. Like the classical world, Italy offers a place to stand outside the Midwest, but in every case my Midwestern characters hold their own against their Italian counterparts. They love Italy, but the Midwest is home. In The Fall of a Sparrow Woody is in love with a wonderful woman from Bologna. He wants her to move to Illinois; she wants him to stay in Italy. In a later novel, The Italian Lover, the same thing happens again, with a different wonderful woman.

The decision to set Confessions in Galesburg was a conscious decision but not a hard one. I didn’t need a big city (Chicago) for this novel; I didn’t need a big university, as I did in Snakewoman, which is set in a fictional town very near Galesburg. Galesburg has the last remaining site of a Lincoln-Douglas debate; it’s got Carl Sandburg’s old house. It’s got a great college, which I taught for many years. I didn’t need anything else.

Mirabile Dictu: Frances’s intense pain over the tragic decision of her daughter Stella, a poet in the Iowa Writers’ Workshop, to live with the dangerous ex-con, Jimmy, is intensely, disturbingly realistic. How were you able to portray the psychology of this fraught mother-daughter relationship?

Robert Hellenga:  As I’ve often said, “A man with three daughters will never run out of stories.” My wife and I have never been seriously at odds with our daughters, but I think that all a father has to do it tap into his fear-fulfillment fantasies to come up with someone like Jimmy.
At an early stage of Confessions my agent said that he couldn’t understand what had happened to Stella to make her such a piece of work. “Abuse” would have provided a convenient explanation–the dark secret that eventually emerges–but that was out of the question for me. So I gave Stella a long history of making bad choices about men, a history going back to high-school bad boy Howard Banks, and later on the face that she enters into a stable lesbian relationship with Ruthy suggests that maybe her sexual orientation was the problem all along, but I didn’t want to make too much of this. I just wanted it to be part of the frame, and Frances feels the same way.

Mirabile Dictu: Did any writers influence you in the writing of The Confessions of Frances Godwin?

Robert Hellenga:  I keep going back to the same sources for inspiration: Tolstoy’s Anna Karenina, Jane Smiley’s Horse Heaven, and Gail Godwin’s Finishing School, Father Melancholy’s Daughter, and now, Flora. I didn’t exactly name Frances after Gail Godwin, but I sort of did. I started out with a name I liked, Frances Cochrane, but (a) I’d already used that name and (b) I didn’t want to suggest an Irish theme. I liked the way “Godwin” hints at a relationship with God (= “God-friend” in Old English).

Mirabile Dictu: What are you reading now and who are your favorite authors?

Robert Hellenga:  Confessions was one of two novels assigned for a religious-studies course at Beloit College. The other was Joshua Ferris’s To Rise Again at a Decent Hour. I read a library copy and liked it so much I bought my own copy. Right now I’m rereading Kent Haruf’s Benediction and Richard Ford’s The Lay of the Land.

I’ll probably reread Elizabeth Strout’s Olive Kitteredge and Jane Smiley’s Horse Heaven, while I’m working on a new novel, and Anna Karenina too, though I’ve read it so often that I tend just to dip into in when I need a shot of writing adrenaline.

Mirabile Dictu:  Thank you very much for this fascinasting interview, Bob.

You can read more about Robert Hellenga at his website, http://www.roberthellenga.com/

“I turned on my reading lamp and took out the Loeb Ovid from my backpack, but none of Ovid’s heroines spoke to me.  They offered warnings rather than invitations.  Why did things always go wrong for the women who were loved by the gods?”–Robert Hellenga’s The Confessions of Frances Godwin

I am a Latin literature devotee.  I am also a former Latin teacher.

Of course I love Robert Hellenga’s new novel, The Confessions of Frances Godwin.

The heroine’s frequent references to Ovid, Virgil, Catullus, and Cicero would enchant me even if she weren’t a Latin teacher.  And frankly I, too, wonder why things go wrong for women loved by the gods.

The Confessions is one of those small, well-wrought, delightfully compelling novels that are hard to classify, not because they’re obscure, but because they’re so entertaining. Is it literary fiction, or is it pop fiction?  It is both.  This intelligent, witty, realistic novel with a soul-searching heroine reminds me of the straightforward but astute fiction of Gail Godwin. Hellenga, a professor emeritus at Knox College in Galesburg, Illinois, has written a contemporary woman’s version of Saint Augustine’s Confessions.  (Yes, she is God-win, and God talks to her sometimes.)

The narrator, Frances, a Latin teacher in Galesburg, begins with A Note to the Reader.  She explains that her confessions are “really a kind of spiritual autobiography.”  When she adds that it isn’t likely the police will come knocking at her door, we think she’s being dramatic.

In the first chapter, set in 2006, Frances retires from her job, because Galesburg High School has decided to cut its Latin program.

I’d protested, organized demonstrations, clipped articles about the Latin Renaissance in the United States and articles about the successes or our program, which had strong enrollments and which was regarded as one of the best in Illinois.  But to no avail.  The state was more than a million dollars behind in its payments to the school district and cuts would have to be made.

When Frances loads up her possessions from  her classroom of 41 years, she strains her hernia lifting the Loeb editions of Greek and Latin literature.  It is after the surgery that she begins to write her confessions, deftly jumping back and forth in time to weave a skillful narrative:  she tells us about her seduction of Paul, a married English professor, at the annual Shakespeare’s birthday party in which they play the balcony scene in Romeo and Juliet; her experiences at a spoken Latin program in Rome  and her reaction when Paul shows up out of the blue; their happy marriage; their worries about their daughter, Stella, a talented poet who drops out of the Writers’ Workshop in Iowa City to live with a violent felon and become a truck driver; Paul’s cancer ;  Stella’s failure to show up until the memorial service; and the crime Frances is driven to commit and God’s insistence that she confess.

There is, of course, much more to this brilliant book.

I am thrilled by Frances’s translation of the poems of Catullus, which is published by a small press.

And I especially love her (Hellenga’s) rendition of  Catullus 61, his elegy for his brother.  (And, by the way, I will be reciting this in  Latin tomorrow to commemorate the first anniversary of the death of my mother.)

I have wandered through many countries sand crossed many seas, my brother, to say good-bye at your grave. Words cannot contain my grief, and your ashes cannot speak. Death has separated us, brother from brother, but take these old-fashioned offerings, wet with my tears. O my brother. Hail and farewell.

I also love what Frances has to say about translation.

After translating “Multas per gentes“–Catullus’s farewell to his brother–a hundred different ways, the magic of the poem seemed to fade into the light of common day, but then a new appreciation, a new kind of appreciation, grew up in its place.  The poem itself, like the notes, is not a sign pointing at another reality.  It is the reality.  It is what it is.  Just as the stars are what they are, and 3C 273 is what it is.  And Rembrandt’s Side of Beef, and first love, too. Even first love.

You don’t have to know any Latin to enjoy this. You will understand Frances as a woman, a teacher, and a Midwesterner.