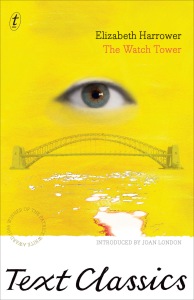 Last fall I added the Australian writer Elizabeth Harrower to my TBR list after reading James Wood’s fascinating essay in The New Yorker, “No Time for Lies:  Rediscovering Elizabeth Harrower.”  Her critically-acclaimed books, published in the 1950s and the ’60s, have been reissued by Text, an Australian publishing house, along with her never-published novel, In Certain Circles, which she withdrew before publication in 1971.  I recently read In Certain Circles (the e-book is on sale for $2.99), and found it beautifully-written, if a little stagey.  But the novel I want to write about is The Watch Tower (1966), deemed her best book by Wood.

The Watch Tower is riveting and suspenseful.  Harrower’s crystalline prose is sharp and precise. It begins like one of those Rumer Godden novels in which children observe dark adult intrigues and only gradually put together the pieces of the puzzle.  Stella Vaizey, the mother of Laura and Clare, is yanking them out of boarding school.  In the headmistress’s office, she announces, “Now that your father’s dead, the three of us are going to live together in Sydney.”  Miss Lambert, the headmistress, hopes to keep Laura on a scholarship, but  Mrs. Vaizey is firm.  She does not value education.  What she does value is her leisure.

In their small flat in a suburb of Sydney, she does absolutely nothing.  She lies in bed while the children attend school and do housework, the shopping, and the cooking.  Laura is sent to secretarial school so she can support their mother:  she gets a job at a box factory.  When the fees are too high for Clare’s not-very-good school, Mrs. Vaizey suggests that Clare should go to an even worse school nearby.

The girls are completely isolated and know no one. They know from devouring books that other people have friends.   One day Clare wants to know why they can’t speak to strangers.  The sad thing is that it is not strangers they need to fear:  it is the ones they know and love. Responsibility has killed Laura’s liveliness and curiosity.  Clare is the one who questions their way of life.

It was true.  If you knew no one, Laura thought, and were not allowed to speak to someone till you knew him or her, how would you ever get to know anyone?  Because you were unknown yourself, and could not be approached either. 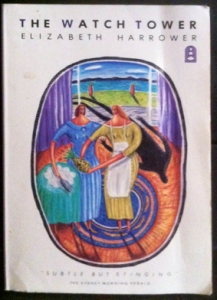 Then at the beginning of World War II, the worst thing that can happen happens.  Their  mother announces she is moving to England without them.  Laura must now support Clare.

If you are deserted by a parent (my father, who had custody of me, moved to another town to live with his girlfriend when I was 16) , you find yourself announcing at random that you need someplace to live.  There are good people (Doris Lessing took in the writer Jenny Diski when she was a teenager, though this wasn’t bliss) and bad people (the ones who expect you to have sex with them).  One of the things you learn is that you never talk about this period of your life to anyone.  “I think I’ve got my virginity back,” a friend who also was on her own in high school anxiously told me.  Like me, she was secretive about her past, and like me, she was studying classics at the university. Ovid was banished to an island for carmen et error.  We feared that we, too, would be banished if anyone knew about our teenage years.

In The Watch Tower, Laura’s very odd, middle-aged boss, Felix, offers to marry Laura and pay Clare’s school fees when he hears about their mother’s departure.  Like children in a fairy tale, Laura and Clare are enchanted by his beautiful big bungalow with the garden.  It will be their house.

But living with Felix is an even a worse trap than living with their mother.  Felix is abusive, misogynistic, sadistic, and often drunk.  Every time he gets rich, he sells his business at a loss to whatever man he has a crush on, and takes it out on Laura  because the man deserts him after the sale.  Clare iescapes into Russian novels; she eventually gets a job in a government office, and has more freedom than Laura.  But Laura is forced to spend all her time with Felix, at the office by day, going over the accounts at night.  He calls her names and viciously crushes her self-respect.  Sometimes he is violent.    She does not believe she could leave Felix and find a job.

Who could break out?  Who could do more than marvel dully at survival?  Who had energy and initiative now to spare for what was merely reasonable?  What promise had the world held out ever that there was anything to escape to?  What was there to desire in this nightmare but the cessation of strain?

Is there a way out?  Clare thinks there is.  And when they take in a young man, Bernard, who collapses at the factory, Felix calms down for a while.  But Laura, the abused and battered woman, behaves much as abused and battered women do.  She is now a quiet, mousy wreck, dependent on Felix, though she is also a brilliant businesswoman.    Her home is the only thing she believes she has.  She does not want to leave her home.

This is a great, brilliant classic, and I look forward to reading Harrower’s other books.