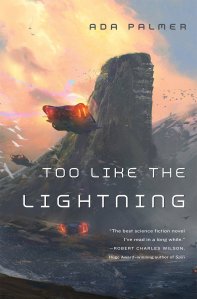 First, let me say that I love genre fiction.  Not all genre fiction:  just the very best.  And Ada Palmer’s Too like the Lightning, a science fiction novel set in a utopian future world whose culture is based on eighteenth-century philosophy, is one of the best. This elaborate novel, categorized as SF, has much to interest readers of literary fiction. Believe me, it is the first time I have raced through a book with multitudinous references to Diderot, Rousseau, Voltaire, and de Sade.

Palmer’s background is eclectic.  Not only is she an SF geek, she is an assistant professor at the University of Chicago and a historian who specializes in the Renaissance, early Europe, and the Enlightenment.  Her first book was  Reading Lucretius in the Renaissance (Harvard University Press).

And now she has moved on to science fiction.  Let’s talk about Too Like the Lightning.

The narrator, Mycroft Canner, is a convict. He is a brilliant man, sentenced for life to be a servicer, meaning he must work on call for anyone who needs his services.  Sometimes he works in sewers, other times he works as a political consultant. We do not learn exactly why he has been punished until we are well into the book,  and it is a shocker.   But whatever he did, he eloquently records, in the language of the Enlightenment, the events that transformed the world in 2454.

He begins with “A Prayer to the Reader”:

You will criticize me, reader, for writing in a style six hundred years removed from the events I describe, but you came to me for explanation of those days of transformation which left your world the world it is, and since it was the philosophy of the Eighteenth Century, heavy with optimism and ambition, whose abrupt revival birthed the recent revolution, so it is only in the language of the Enlightenment, rich with opinion and sentiment, that those days can be described. You must forgive me my ‘thee’s and ‘thou’s and ‘he’s and ‘she’s, my lack of modern words and modern objectivity. It will be hard at first, but whether you are my contemporary still awed by the new order, or an historian gazing back at my Twenty-Fifth Century as remotely as I gaze back on the Eighteenth, you will find yourself more fluent in the language of the past than you imagined; we all are.

Do you love it?  I do.  But if you don’t, you will be happy to know that much of the book is written in simpler language, and the rules of language are explained.  Gendered speech is forbidden, though Mycroft frequently breaks the rule and uses “he” and “she” for the pronoun “they” (ouch!) the people use instead.   The dialogue combines English,  translated Chinese and French (she makes the English sound a bit like those languages), and, what I like the most, some of the characters speak Latin.  The lovely thing?  This is the only book using Latin, with the exception of Peter Stothard’s The Senecans:  Four Men and Margaret Thatcher (I wrote about it here)  and of course scholarly books, I have read without Latin errors since 2015.

At the center of the book is a political plot that threatens to unravel many well-kept secrets.  The maverick Mycroft and Carlyle Foster, a Sensayer (a cross between  psychologist and a metaphysician), are employees of a powerful household  protecting and hiding  Bridger, a philosophical boy with a frightening ability to animate inanimate objects.  (My favorites are the toy soldiers, especially the Major.)  Mycroft and Carlyle are devoted to him, and the household protecting him–among them Thisbe (who makes “smelltracks” for films), and Cato, a fanatical science teacher at a museum–are all in the family business of managing the flying “cars” and traffic–and recognize that he needs shelter.   But their business and the safety of Bridger are  jeopardized when a high-profile theft is committed in their “bash'” (household).

World-building is a big part of this novel, and it is complicated.  “Hives” have taken the place of nations:  people from all different backgrounds define themselves by their talents rather than geography or race:  they choose to become humanists, Utopians, Masons, and several other categories that make no sense out of context.  What happens when somebody steps outside of the box–I mean far, far out of the box–in a peaceful world?  Havoc is created.

Here is a quote from  Palmer’s  history blog, Ex Urbe, that also sheds light on her novel.

All my projects stem from my overall interest in the relationship between ideas and historical change. Our fundamental convictions about what is true evolve over time, so different human peoples in different times and places have, from their own perspectives, lived in radically different worlds with radically different rules.

A very enjoyable read!  Very brilliant, very complicated.  And there’s a sequel.  That’s  on my list.