Let’s allow the publishers their fatuous make-believe:  they never do read any books, otherwise they wouldn’t publish so many!”–Balzac’s Lost Illusions

Balzac, William Cooper, and Howard Jacobson have written satirically in their fiction about the publishing business.

Lucien, the up-and-coming hero of Balzac’s Lost Illusions, abandons his literary talent for the instant gratification of journalism:  publishers in nineteenth-century Paris pay newspaper editors for good reviews, and if they don’t pay up, the reviews are negative. This journalistic power seems normal to Lucien, who can grind out 30 articles in a day under pseudonyms to support his gambling habit and high-society incursions.

Joe Lunn, the novelist narrator of William Cooper’s charming 1983 novel, Scenes from Later Life, explains that the success of a book, and especially his new book, “was more likely than not decided long before it was actually published,” because advertising is as necessary as reviews and his publisher won’t advertise.

Guy Ableman, the novelist narrator of Howard Jacobson’s boisterous publishing satire, Zoo Time, blames book groups, three-for-twos, and the internet for the death of reading.  His books aren’t available in bookstores, and he is arrested for shoplifting one of his own books from Oxfam.  His publisher commits suicide, depressed by the new dependence of success on “blags” and “twits.”

Over the centuries, thousands of writers have inveighed against the publishing industry.  Of the three I mention, Balzac’s accusations are the most outrageous, but the even-tempered Cooper is also cynical about the future of literature, and witty Jacobson blames the gullibility of readers as much as he blames publishers and editors for trying to market books to readers on the net.

We feel like insiders when we read novels about writers and publishers.  Aha!  So that’s how it is. 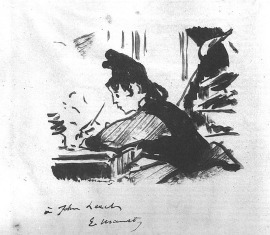 Newspapers are folding, publishers merge, e-books outsell books, writers have to tweet to sell books, and desperate literary writers invest in a “Freedom” app to keep them from surfing the internet when they should be writing.

Books are our most precious artifacts. Have they gotten worse? Perhaps yes, perhaps no.

I don’t have the faintest idea what goes on in New York and have no ax to grind, but I have struck out with a couple of new short story collections this spring, cannot imagine what my friend sees in the latest “literary masterpiece” by X, and think of permanently reverting to science fiction, a genre which “is what it is,” and which I say I like but read remarkably little of.

On the other hand, there are still Michael Chabon, Margaret Drabble, Hilary Mantel, A. M. Homes, Amitav Ghosh, and countless other great writers.  So, as Dorothy Parker put it, and this is out of context: “You might as well live.”

It is much easier in the Back of Beyond to understand the decline of journalism than to understand book publishing.  We are all witnesses to the death of the American newspaper.  And for a number of years I freelanced, so I was an insider-outsider.

After attending a writers’ conference where the acclaimed teacher/writer forbade the use of adjectives, adverbs, participles, relative pronouns, flashbacks, and exposition in fiction, my short stories read like action-packed telegraph messages but my style was well-suited for journalism.

I began to write what I call “bubble-gum journalism.”

There was no pressure, because it was not immortal prose.

The editors were kind, if gloomy to a Dickensian degree.  Generally they were sensible, but you had to watch your back.   If they forgot to change the jokey title of your article on edgy fashions from “Courtesan Couture:  Lay Lamé Lay” to a more acceptable headline, you would find yourself apologizing to the hysterical mother of the 40-year-old woman who had worn the gold lamé tube top and hot pants to the Elton John concert.

With so many newspaper writers fired and early-retired, approximately four people now write the entire paper here.  It is said to be like the House of Borgia, without Borgias.

I love books, newspapers, and magazines and don’t think about them in terms of the publishing business.

But we will all regret it if the business kills the publications.

We all have our stories.

The keyboardist (or drummer?) for John Cougar Mellencamp helped us move a desk from a garage sale in return for our helping him move a chair.

We left the desk in Indiana because we couldn’t squeeze it out the door again.

Later, I acquired a big wooden desk that was similar.

The first time we hired professional movers, the young men complained about the stairs, the books (“What’s in here, bricks?”), and the heavy desk.  One of them, who was really raging about the books,  sublimated by vengefully lecturing me on my inadequate polishing of the desk.

Okay, I tried polishing after that.  I knew I would have to move again.  I wanted happy movers.

Next time we moved, we hired wonderful movers who endured my frantic continued packing while they loaded the truck and caught a panicky tortoiseshell cat  who dashed out of the basement.  They drove cross-country with a truckload of furniture and books and not only delivered my desk (and books)  intact , but somehow kept our big plants alive in the dark truck. 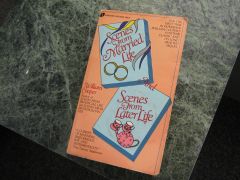 In William Cooper’s charming novel, Scenes from Later Life, the fourth in his series about writer and civil servant Joe Lunn, Joe is preparing to retire, and he and his wife sell their house.  The description of the movers made me laugh, though Joe is exasperated by their incompetence.  If Joe had had to move my huge desk, he would have been thrilled with  movers.

They came half an hour late, having been drinking tea at a caff on the main road.  They were in possession of a pantechnicon with scraps of old carpet lying on the floor and containing a huge number of tea chests partially filled with crumpled newspaper.  There were four men; one, older than the others and smelling rather more strongly, appeared to be the foreman.  He assured us that though they were starting half an hour late they would finish early.  Early, if you please!  It was immediately obvious that they were going to achieve that desirable end, when the house resounded with the noise of our chosen pieces of furniture crashing against the bannisters and hanging onto door-posts on their high-speed way to the pantechnicon.”

I can visualize this so clearly.

Then there is the problem for Joe of  redecorating the new flat.  The boiler has been boxed in by the kitchen carpenters so no one can light  the pilot light, the sink is installed too far away from the dishwasher, the chairs are upholstered with the wrong material…and it never stops.

We have never redecorated, though we did get some rewiring and painting done.  I don’t remember ever seeing the electricians:  were they little mice nibbling the wires?  The painters spent quite a lot of time here, and I learned their names.  I would say, “Hello,”at the horrid hour of 7 when they showed up, then dash out on my bicycle and hope they would be gone by the time I ventured home.  I wanted to avoid conversations with Michelangelo or Fra Angelico about their smoking breaks. Yes, somebody smoked inside, possibly everybody, and there were always cigarettes in the toilet.  Here’s what I learned from a friend many years ago: if you have maids or workmen, get out of there, because they will never do anything the way you want it done anyway.

Cooper’s charming novels, which I’ve read recently, are unassuming, thoughtful, and funny:  Scenes from Provincial Life, Scenes from Metropolitan Life, Scenes from Married Life, and Scenes from Later Life,  There is nothing the narrator Joe Lunn doesn’t talk about as we follow him through different stages of life:  sex, bachelorhood, work, money, marriage, old age and death.  Scenes from Later Life is the last of the four but not the best:  it is, however,  a quietly observant, stylish portrayal of the effects of aging.  I coudn’t make myself read this fourth novel until my own mother was in a nursing home, because I didn’t want to dwell on this phase of life.

The novel begins with a trip to his mother’s nursing home.

I said, “I’ll tell you how old you are if you want me to.  But you do know how old you are.  And you know you know.  In fact ten minutes ago you told me.”

There’s an underlying misery in these exchanges with his mother.  He makes the same statements again and again.  Every time I see my own mother, she asks, “Is that how old I am?” It’s as though, traumatized by leaving the house she lived in for 50 years, she cannot bear what she sees.  She is usually lucid, though.

Joe experiences the trauma of moving to a flat now that he is aging.  He  has arthritis and needs a cataract operation, but he still has a warm, sexy relationship  with Elspeth, who is 15 years younger.

There is quite a lot of sadness in this novel. Joe’s friend, Robert, another civil servant/novelist, has spent most of his time alone since his wife was diagnosed years ago with schizophrenia and is in a private institution.  Poor Annette!  I loved her character in Scenes from Married Life.

But William Cooper/Joe keeps the novel from getting sentimental.  This is the way things are:  the men accept them.  They seem to know there is so far and no farther one can push, though the women of the novel (and women like me) always think more can be done.

And here’s a John Cougar Mellencamp video (since I mentioned him above).