I am the only person at the coffeehouse with a notebook.  Everyone else has a laptop.

I scribbled notes at a glass table filled with coffee beans.

Although the Persuasion Book Club could be a full-time job–more articles have been written on Austen than I could read in a lifetime–I will not trivialize the experts by summarizing their theses.

No, I am dashing through Persuasion, loving every word of this classic, enthralled by Austen’s romance about an older heroine (the only romance Austen wrote, in my opinion).

Anne Elliot is only 28, not 40 or 50something, as I suspect many of us are. Austen never married.  Her heroines are under 30, or they’d never have a conjugal chance.

Few are as fascinated as I am by Austen’s middle-aged characters, from silly Miss Bates in Emma to Mrs. Bennet in Pride and Prejudice.  In Persuasion, Lady Russell, Anne’s late mother’s best friend, is a kind, devoted, thoughtful, if conservative, widow.   She does not marry Anne’s father, as everyone expects. Instead, she advises Anne on marriage.   Badly.

We are more liberal than Lady Russell.  Live with him, we might have said.  Men come and go:  husbands disappear in their 40s only to resurface after midlife crises, or, if we divorce them, we go on blind dates, walk out on men who make racist remarks, and indignantly trudge the three miles home in very uncomfortable shoes. Fortunately, a friend of our fix-us-up friend is so delighted by the story he asks us out…  and three months later we’re married!  (This stuff happens.)

THE OPENING OF THE LITTLE FREE LIBRARY is the big event in our neighborhood this week.

It is part of a literacy movement.  You can build or order a little house-on-a-stick from Little Free Library and plant it in your yard.

Fill it up with old books.  Then neighbors can open the hinged window to borrow a book, or exchange one of their own for a free library book.

I walk down this street almost every day.  “Have you seen the Little Free Library?” everyone wants to know.

The selection could be better.  There’s  Janet Evanovich, Michael Connolly, Edward Sawtelle, Stieg Larsson.  Enjoyable books, but the only one I approved was Jack Kerouac’s On the Road.  He said, and this is appropriate:

…the prettiest girls in the world live in Des Moines.

He also praised the pie and ice cream in Iowa.

I saw the travelling exhibit of Kerouac’s scroll (the typed pages taped together) of On the Road at the University of Iowa Art Museum.  The long glass case was endless; I peered too closely and accidentally touched the glass.  The guard came.  “Don’t touch the glass.”  Okay! 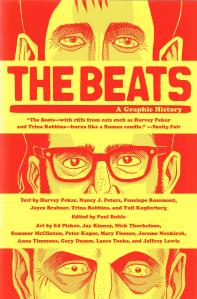 Everything you need to know about Kerouac can be found in Harvey Pekar’s The Beats:  A Graphic History.

We should all go on the road.

Good road trips taken in the past:  Iowa City to Bloomington (many times),  Bloomington to Washington, D.C., (twice), D.C. to Buffalo, Buffalo to Toronto, Des Moines to Omaha, Lanesboro to Winona, Princeton to New York City.

Will I ever make it to Kansas City?

Can’t go, because I’ve been told I’d have to sit through a Kansas City Royals game.

I like baseball, but only at World Series parties.

Too late in the season.

Tomorrow I’ll tell you about a couple of books I’ve been reading.

4 thoughts on “Radical with a Notebook: Persuasion & The Free Little Library”