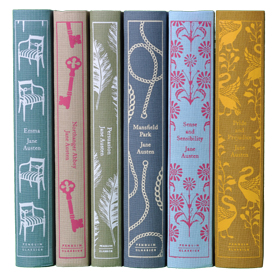 Once a year I declare that I will read more new books.

One new book a week, I say.

When I mentioned this in a comment recently, a blogger wittily said, “And how many old books do you read?”

I do read a number of old books, don’t I?

With the exception of Penguin Classics and Oxford World Classics, I do not support the publishing industry.  I’d rather be reading Jane Austen.

The new books often sound good, and occasionally are good, but most are crap.  Life’s too short.

And I’m an Anglophile. I prefer Austen, Dickens, and D. H. Lawrence to most American writers.  I would be delighted to “sleep on Christopher Tietjens’ lawn,” except that he’s a fictional character, so does he have a lawn?  (For more on my doomed love affair with Christopher, the hero of Ford Madox Ford’s Parade’s End,  go here.)

Although I prefer English contemporary novels, too,  I have had excellent luck with new American fiction this year:  Barbara Kingsolver’s Flight Patterns, Karen E. Bender’s A Town of Empty Rooms, Steve Yarborough’s The Realm of Last Chances, and Susan Choi’s My Education.

I skip most historical novels, and read contemporary American fiction to find out what American life is like.  My life is about bike rides, books, the internet, Master Chef, cooking Mollie Katzen’s recipes, and hanging out with the cats.  But what is it like for others?  Based on fiction, it is about extra-marital affairs.  Infidelity is at the heart of three of the four aforementioned American novels.  Quite a lot of fiction IS about extramarital affairs, if you think about it. 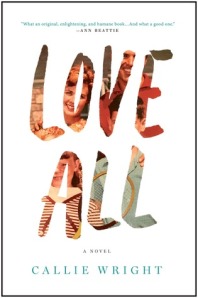 Take Callie Wright’s new novel, Love All, which I must admit I read because of a blurb by Ann Beattie.

Triangular relationships dominate this charming, if uneven, first novel, set in Cooperstown, New York, in the 1990s.   Hugh, the principal of Seedlings, a pre-school, is unhappily married to Anne, a chilly, almost OCDish lawyer.  But when a Seedlings student, Graham Pennington, has an accident on the monkey bars and his mother, Caroline, cannot be reached,  Hugh nervously accompanies the boy to the hospital in loco parentis.  Hugh and Caroline, an artist, bond immediately in the hospital, almost as though he is Graham’s other parent; one thing leads to another, and they have sex.  This couple seems made for each other, and we can’t help but cross our fingers for them, though that isn’t usually our reaction to infidelity.

Hugh is not the only one who has affairs.  Although Anne’s 86-year-old father, Bob, is devastated by his wife Joanie’s recent death, he had many discreet affairs during their marriage.  When a local writer in the ’60s, Elaine Dorien, published a roman a clef, The Sex Cure, about the sex lives of the town’s inhabitants, Joanie began to notice her husband’s predilections for other women.   Even Anne, a teenager at the time, read the novel and understood what was happening.  And It had a lasting effect on Anne.

It is Wright’s unadorned writing that makes the novel so readable.  She pays attention to detail, but doesn’t attempt the poeticism that some writers try too hard to achieve.

From time to time, when Joanie noticed he was staying late at work or had made Saturday plans with Charlie, she would pull the novel off her bookshelf and read a chapter or two before bed, and Bob would break off whatever insignificant dalliance he’d been involved in and return to his wife.

Even Julia, Hugh and Anne’s fifteen-year-old daughter, is in a triangle:  her two best friends are Sam and Carl.  She has a crush on handsome Sam, but cute, curly-haired Carl “likes” her.  After she  reads The Sex Cure, found under her grandmother’s mattress, she wonders if she can write something to alienate Carl.

Thinking about The Sex Cure, I opened my journal and flipped to a clean page.  All the narrow lines–between truth and fiction, want and need, friendship and love–seemed suddenly traversable:  Elaine Dorian had done it.  By the stroke of her pen, she had roiled and rippled the town with one story, a story everyone believed, so much so that she may have made it true.

There are a couple of problems with this enjoyable novel:  Wright shifts from one point-of-view to another, and she succeeds better with some characters than others.  Julia’s is the most original voice because Wright switches from third to first person narration: it allows her to tell the story less formally and more quirkily.

Anne, the cold lawyer, and her teenage son, Teddy, a jock, are stick figures.  The sections devoted to these characters are short, but the prose is very flat here, as if Wright were just getting it done.

There is some very graceful writing in Love All, and maybe next time Wright will perfect the characterizations and the ending.