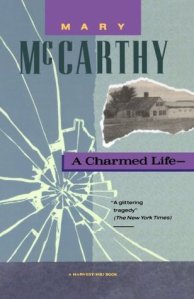 I didn’t really want to go on a bike ride on Sunday.

I was addicted to reading Mary McCarthy’s  A Charmed Life, a satiric novel, published in 1955,  centered on several residents of an artists’ colony in a New England village.

But how could I tear myself away from  the exploits of the heroine, Martha Sinnott, an actress and writer who has also breezily taken graduate courses in philosophy?  (I took it with me in a bag, in case we rode to a cafe.)

If you are under the impression that McCarthy was a schlock writer, let me say that A Charmed Life is nothing like her best-seller, The Group.  I very much enjoyed her literary beach book about eight Vassar graduates, and it obviously paid McCarthy’s bills, but I consider it a highbrow hybrid of Peyton-Place-meets-Valley-of-the-Dolls.

But A Charmed Life really is a dazzling book, and I now have a new level of respect for McCarthy.  Many have said she is a great underrated American writer, and now I see it.

A Charmed Life focuses on John and Martha Sinnott, an unconventional couple with an idiosyncratic relationship to the village of New Leeds.  Martha used to live here with her violent first husband, Miles, but ran away from him seven years ago after he locked her out of the house in her nightgown.  Now she and her second husband, John, are back in New Leeds.

McCarthy’s eloquent description of the attractive couple piques our interest.  Not only are they bright, they are beautiful.

The Sinnotts were a romantic couple.  Strangers still glanced after them on the street, wherever they went:  waiters smiled; butchers beamed; as if they were morganatic, said Martha, who had begun to find their position ridiculous.  It was partly their appearance.  Martha was a strange, poetical-looking being, with very fair, straight hair done in a little knot, a quaint oval face, very dark, wide-set eyes, and a small slight figure; she had been on the stage.  John, also, was quite remarkable-looking, tall and small-boned, with high coloring, neatly inscribed features, and dark-brown, stiffly curling hair; he was the son of a military family and was often taken for English.

Martha is a minor artist herself, writing a play at the insistence of her husband.  But here’s the catch:   she feels like a charlatan, because she dislikes writing the play, but doesn’t dare tell  John, who keeps her to a schedule, more or less locking her in the study every day.  (N.B.  This reminds me of the writer Colette’s  husband, Willi, locking her up in the attic to write the Claudine books.)

Martha is not impressed with New Leeds, a hub of mediocre artists.  She confides in her old college roommate, Dolly, an artist who has come to New Leeds on vacation,

“This horrible bohemian life you see up here, with lily cups and beards and plastics–it’s real leveling, worse than suburbia, where there’s a frank competition with your neighbors, to have the newest car or bake the best cakes.  I can understand that.  I’m like that myself.  But here nobody competes, unless there’s a secret contest as to who can have the most squalid house and give the worst parties.  It gives me the strangest feeling, as if I were the only one left in the world with the desire to excel, as if I were competing, all alone, on an empty stage, without  judges or rivals, just myself–a solipsistic nightmare.”

The scenes that highlight the wild seesaw emotions in Martha’s relationships with men are templates for some of the more intense work of the ’60s.  McCarthy’s book can be read as a predecessor of Edward Albee’s Who’s Afraid of Virgina Woolf? or  John Updike’s fiction about suburban adultery.  Did Albee and Updike read McCarthy?  I wouldn’t be surprised.   Martha’s meeting with Miles ends in disaster.  Although he has remarried, he and Martha are a good intellectual match, who talk about Shakespeare and Kant at a play-reading at a neighbor’s house.  They also talk about the unities of tragedy.

Is this a comedy or a tragedy?  Miles drives her home, and their drunken attraction ends in a rape.  Martha does not want to have sex with him, but John is away, and Miles is so insistent that Martha finally laughs and realizes it doesn’t matter, so often have the two already had sex, and anyway she can’t stop him.   But when she gets pregnant, she wonders if the child is Miles’s.  The doctor insists that it is statistically impossible, since they had sex right after her period, and she had sex many times with John, but Martha’s ethics lead her to insist on an abortion.

This decision, in my view, makes it one of those odd Catholic novels turned on its head, the kind of think Walker Percy always manages to pull off.

I am looking forward to reading McCarthy’s other novels.  So many to choose from.

By the way, everybody of my generation, or everybody who watched Dick Cavett, witnessed Mary McCarthy’s  faux pas on the Dick Cavett Show in 1980, when she said that Lillian Hellman was a dishonest writer.  She added, “I said once in an interview that every word she writes is a lie, including ‘and’ and ‘the.’ ”

Lillian Hellman sued her.  The lawsuit went on for four years.

Two fascinating women.  I’ve read a good biography of Lillian Hellman, A Difficult Woman.  Does anybody know any good biographies of McCarthy?