Thank God for Mary McCarthy,  I thought when I picked up The Oasis. I had just spent a week wallowing from dawn till arctic dusk in page-turning novels by Daphne du Maurier, Alice Adams, and Alison Lurie. (Perfect February reading.)  It’s not that I didn’t enjoy my binge, but McCarthy’s tough prose proved a tonic.

Hasn’t McCarthy been underrated, even derided in recent years?  I can only think that her novels, with the exception of The Group (1963), went out of style because she was so intellectually tough.  The leftist McCarthy was idealistic, controversial, and outspoken:  the critic and essayist Philip Rahv threatened to sue her for libel after she satirized him in her novel, The Oasis, and Lillian Hellman did sue her after McCarthy said on The Dick Cavett Show in 1980 that Hellman was a dishonest writer.  (And Hellman was dishonest, in that her brilliant memoirs were at least partially fictionalized.)

I have long been a fan of McCarthy, who seems to me the quintessential American woman writer, neglected because of her very intellect and originality, not because of her lack thereof.  The revival of her work by Library of America, which recently published McCarthy’s complete fiction in two volumes, is inspired and timely. What would she make of 2018? 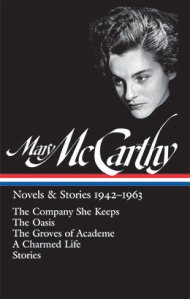 My two favorite books by McCarthy are A Charmed Life, a  satiric novel which focuses on several characters in an artists’ colony in a New England village, and Birds of America, a hilarious skewering of American innocence and hypocrisy through the eyes of a radical college student on his junior year abroad at the Sorbonne  in the 1960s. (I wrote about these two  here and  here. )

All right, I can’t read my favorites all the time.   I recently hunkered down with McCarthy’s little-known novella, The Oasis (1949).  Here, she satirizes a group of intellectuals who decide to start a community in the mountains, where they will live communally (albeit in separate quarters) without electricity and will grow their own food.  They arrogantly call their community Utopia.  And of course they intend not to fail in the grand manner of Fruitlands, the commune founded by Bronson Alcott and satirized in Louisa’s Transcendental Wild Oats,  and other Utopian experiments.

The community is divided into two groups, the Purists and the Realists.  And the subject of dissension at the meetings is too often Joe Lockman, a sentimental Babbitt-like salesman who irritates nearly everyone in every scene.  Mac, the leader of the Purists, is furious at the idea of admitting bumbling Joe to Utopia.

“He is the antithesis of everything we stand for,” shouted MacDougal MacDermott, the editor of a libertarian magazine, the night Joe’s name was proposed to the Utopian council. “My God, aren’t we going to have any standards? ….  my God, the man is uncivilized.  Don’t you believe in anything?  This fellow is a yahoo.”

But then Mac decides accepts Joe.  And, in retrospect, this overly-scrupulous admission is a mistake.

Will Taub, the leader of the Realists, does not share the Purists’ ideals.  He joins Utopia mostly because he wants to see it fall, as do his friends.  “In practice, of course Taub and his friends conceded to anyone (this automatically excluded fascists and communists) the liberty of behaving as ineffectually as he wished.  But the right of a human being to think that he could resist history, environment, class structure, psychic conditioning was something they denied him with all the ferocity of their own pent-up natures and disappointed hopes.”

On the first morning at Utopia,  Joe  awakens everyone with gun shots. (He is doing target practice.)     And the stove, which he was fiddling with before he got out his gun, explodes and burns off the bangs and eyebrows of Katy, who is  in charge of breakfast that day.  Katy had proposed Joe’s name–and now they are stuck with him.

Community meetings go nowhere–political action seems too difficult when there are only 50 residents–and even the brochures they discuss don’t get written.  (They did, however, get things done back in the city.)  But they do somehow manage to grow their own food.  And it is on a beautiful morning when they plan to pick strawberries and have a picnic that they find intruders in the meadow  picking their berries.

Katy is  by far my favorite character.  She marched right out  and asked the intruders to leave.  They yelled obscenities at her.  And after the intruders are scared off by two Utopian men with a threat of violence (and with Joe’s gun), Taub and Katy have a discussion. Taub tries to get Katy to admit force was needed.

In this  dense 80-page novella, it is a relief to have Katy,  a real Utopian, who knows the community won’t last but has great sympathy for their vision.  She is able to redefine the problem  (if they listen to her).

And that, it seems to me, is what McCarthy does.

9 thoughts on “A Mary McCarthy Revival and The Oasis”