Lovely editions: I do not, of course, have these!

You only read like that when you are young:  perhaps no one ever really behaves like a character in a novel.

Nonetheless, these books are far from cozy.

When I recently reread Trollope’s Phineas Redux and Ford Madox Ford’s Some Do Not…, I was astounded by their dark contemporary relevance.  In these two novels, the heroes must confront the savagery of defamation of character.  Slander, gossip, and libel threaten the reputations of Trollope’s Phineas Finn and Ford’s Christopher Tietjens.

Calumny is the stuff of daily newspapers and gossip, right?

In Some Do Not..., the first novel in Ford Madox Ford’s modernist tetralogy, Parade’s End, Chritsopher Tietjens, an Edwardian gentleman and a brilliant statistician with a complicated code of ethics, must deal with calumny.  His cruel wife, Sylvia, has left him with her lover, but people say she left Christopher because he was promiscuous.  They think Valentine, a suffragette, the daughter of an old friend of his father’s, is his lover..  They are in love, but they are not lovers.   Christopher cannot divorce Sylvia, who is a Catholic.  He does not think it is right to involve the much younger Valentine.

This is just the first book, set on the eve of World War I. .

But Sylvia returns and continues to spread scandal about Christopher  She spreads the rumor that Christopher’s lover is Ethel Edith, his friend MacMaster’s wife.  One of Sylvia’s banker boyfriends manages to queer Christopher’s account and credit rating by some clever fakery that make it seem he is irresponsible and overdrawn.

He considered that he was dull-minded, heavy, ruined, and so calumniated that at times he believed in his own infamy, for it is impossible to stand up forever against the obloquy of your kind and remain unhurt in your mind.” 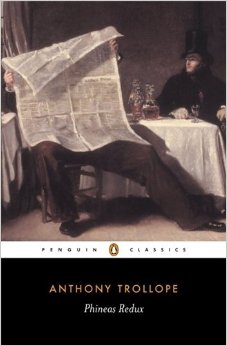 That feeling of helplessness:  how can Christopher stop the talk? Occasionally he finds a way to disprove some of the lies, but people are altogether too eager to believe calumny.

Trollope is a far from cozy writer, though that is his reputation (perhaps people have seen too many costume dramas?).  In Phineas Redux, the fourth in his political Palliser novels, Phineas Finn, an Irishman, returns to politics.  Chosen and backed by English friends to stand for a liberal seat in Parliament, he wins a tough, corrupt election.

There is prejudice against the Irish.  In addition, Phineas has two powerful enemies hindering his political success: Mr. Bonteen, another liberal, baits Phineas publicly and influences the Minister against him, and Quintus Slide, the editor of a tabloid, the “People’s Banner,” opposes Phineas politically and is determined to bring him down.

One of the strongest weapons used against Phineas is his attractiveness to women.  A scandal is made of his loyalty to Lady Laura Standish Kennedy, an intelligent woman who has left her mad husband, Robert Kennedy, a wealthy landowner who will not divorce her.  Lady Laura is living with her father in Dresden, partly to evade the scandal, partly so Kennedy cannot force her to return by law.  (The marriage laws are cruel.)  When Laura invites Phineas to visit them in Dresden, he feels he must, because he is obligated to them for helping him financially and politically.  He has a complicated relationship with Laura:  she turned down his proposal of marriage a few years ago, but is actually in love with him. He is not in love with her.

This visit inspires  Kennedy to send  a truly mad letter to Quintus Slides’ newspaper, vilifying both Lady Laura and Phineas.  And though Phineas’s lawyer manages to slap a cease-and-desist order on the publication of the letter,  Slide viciously prints so much other scandal about Phineas that even some of his fellow politicians believe it.  And when Phineas is accused of murder, many believe he is guilty.  It is his women friends who keep him from hanging.

The power of Quintus Slide helps us that the power of the press can be for good or ill.

Reading these two novels reminds us that gossip can be a bitch.

Both these novels are remarkably well-written, and not only good stories but  curiously contemporary in their treatment of age-old problems.