I recently read and very much enjoyed two semi-canonical novels, Rosamond Lehmann’s The Weather in the Streets (1936) and Shirley Jackson’s We Have Always Lived in the Castle (1962). Lehmann’s is a love story; Jackson’s is a horror novel.

Wendy Pollard, author of a recent biography of Pamela Hansford Johnson (I interviewed Wendy here), is also the author of a book on the reception of Rosamond Lehmann’s work.  And so I decided to reread Lehmann: I have a few of her novels in the ’80s American Dial Press Viragos with black covers.  I began with The Weather in the Streets, which is a sequel to Invitation to the Waltz (which I haven’t read yet, but I have the e-book).

The Weather in the Streets is a poignant, unsentimental chronicle of an adulterous love affair from a woman’s point of view.   The  impoverished heroine, Olivia Curtis, is separated from her husband, but sees no point in divorcing him. She has many artistic friends and  works for low wages for Anna, a photographer.  She lives in a room in her cousin Etta’s flat and sometimes goes hungry.   One weekend, traveling on the train to visit her sick father in the country, she meets a former neighbor, Rollo, who is now a wealthy, unhappily married man working in the City. He says he’ll telephone her.

There are many emotions we all recognize, such as the agony of waiting for the telephone. Lehmann presents Olivia’s emotions by a page of stream-of-consciousness.  She was undoubtedly influenced (says I)  by Dorothy Parker’s  short story “A Telephone Call” (1930).  Take a look at the Parker first.

I must stop this.  I mustn’t be this way.  Look, suppose a young man says he’ll call a girl up, and something happens, and he doesn’t.  That isn’t so terrible, is it?  Why, it’s going on all over the world, right this minute.  Oh, what do I care if it’s going on all over the world?  Why can’t the telephone ring?  Why can’t it, why can’t it? … You damned ugly, shiny thing.  It wouldn’t hurt you to ring, would it?

Parker’s narrator is more vulnerable than Lehmann’s reserved Olivia, but  that may be the difference in tone between Parker’s first-person singular and Lehmann’s third-person singular. Here is an excerpt from the cooler, possibly older Olivia:  (by the way, the dot-dot-dots-dots are Lehmann’s punctuation, not my ellipses.)

The telephone rang, faint to her ears:  someone inquiring, Kate would answer.  It couldn’t be Rollo:  not yet.  Not ever, of course.  Rollo would think about ringing up, sometime tomorrow maybe; and then he wouldn’t do it.  Because nice men don’t like to get mixed up…. Rollo was undoubtedly in the category of nice men, broad-minded.  They are on their guard…. 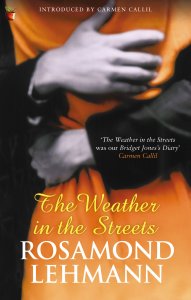 Olivia expects little.  But she and Rollo embark on an affair and fall in love.  They spend some nights together, get away for a few weekends, and once go away for longer.   His wife is an invalid.  They move in different social circles.  Olivia reads about his wife in the society pages. Olivia is usually alone.

There are some very rough patches in their relationship.  He disappears for a summer. Olivia  has an abortion.  Will she stay with him?

The book seems entirely modern.  Young women are very vulnerable in love, yet are experienced by their late twenties.  Where are all the men? I must say, it is senseless (and I mean SENSELESS!) to have an affair with a married man.  But one can see Olivia trapped in a very small  society.  Whom can she love?

Fascinating, very good in parts, occasionally a purple patch, but not often.

Shirley Jackson’s We Have Always Lived in a Castle is a clas-SICK!  It is a horror take on Dodie Smith’s I Capture the Castle.  Smith’s novel is narrated by the benign, humorous Cassandra Mortmain, an aspiring writer who lives in a dilapidated castle with her eccentric family. The narrator of Jackson’s novel, Mary Catherine Blackwood, lives only with her sister in the large country house because her family is dead from arsenic poisoning.

When she introduces herself, she talks about overdue library books and it seems cozy. But there are warnings that she is quite weird.

I have often thought that with any luck at all I could have been born a werewolf, because the two middle fingers on both my hands are the same length, but I have had to be content wi;th what i have.  I dislike washing myself, and dogs, and noise.

When Mary Catherine, nicknamed Merricat, goes shopping in the village, she has to run a gauntlet.  The villagers make rude remarks and the children yell,

Merricat, said Connie, would you like a cup of tea?
Oh, no, said Merricat, you’ll poison me.

We do have a certain sympathy for Merricat, and especially for Constance,  her older sister, who was tried for murder and acquitted. But  Merricat’s point of view is… shall we say odd?

And when a man comes for an extended stay, Cousin Charles, Merricat is furious.  We suspect the truth from the beginning…

This novel appeared in a volume of Shirley Jackson’s writing in a Library of America edition.  So she in the  canon?  Well, she is in the women’s canon, at any rate.

Jackson wrote several novels, but I am only familiar with We Have Always Lived in the Castle and The Haunting of Hill House.  Are the others any good?  They’re not in my LOA edition.

10 thoughts on “Semi-Canonical: Rosamond Lehmann’s The Weather in the Streets & Shirley Jackson’s We Have Always Lived in the Castle”