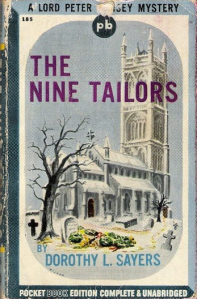 Genre writers are seldom admitted into the canon.

But Dorothy Sayers and Pat Murphy are canonical within their genres.  Sayers, the author of the Lord Peter Wimsey mystery series, is one of the “queens” of Golden Age Detective Fiction. And Pat Murphy is an award-winning science fiction writer.

I recently read Sayers’s The Nine Tailors and Murphy’s The Falling Woman, which won the Nebula Award.

Sayers’s The Nine Tailors, published in 1934, is one of my favorite Peter Wimsey novels.

Sayers’s sleuth is a witty Oxford-educated lord who dabbles in solving crimes. On  a snowy New Year’s Eve, as  Lord Peter Wimsey and his valet, Bunter, are traveling back to London from the country, Wimsey drives the Daimler across a slick bridge in the Fens and plunges into a ditch.

Sayer’s lively style, humor, and and witty grasp of figures of speech are apparent from the beginning.

The car lay, helpless and ridiculous, her nose deep in the ditch, her back wheels cocked absurdly up on the bank, as though she were doing her best to bolt to earth and were scraping herself a burrow beneath the drifted snow. 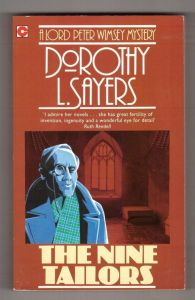 The friendly rector of a tiny village, Fenchurch St. Paul, and his wife give them a place to stay for the night.  The rector tells Lord Peter that the village bell-ringers plan to ring in “the changes” for the New Year.  One of them has influenza, and Lord Peter, who rang the changes at Oxford, takes his place.

Sayers has done her research:  she describes the change-ringing methods (lots of math!) for the nine-hours of bell-ringing on New Year’s Eve.  But, as you might suspect, the bells are also part of the mystery.  Many years ago, an emerald necklace was stolen from a wedding guest at the Thorpes’ manor house in the village.  The thieves were caught, but the jewels were never found. Sir Henry repaid the guest, practically bankrupting himself. (This reminds me of Maupassant’s “The Necklace.”)   Lord Peter learns more about the theft during his stay, and attends the funeral of Lady Thorpe, who died of influenza on New Year’s Day.  A few months later, when Sir Henry also dies, they find a corpse with missing hand and a battered face shallowly buried on top of Lady Thorpe’s coffin.  Lord Peter comes back to solve the crime. And may I say the bells play a sinister role..

I read Sayers more for her lovely writing than her watertight plots:  but sheshe goes in for timetables, ciphers, and all kinds of lovely things that I sometimes skip over! 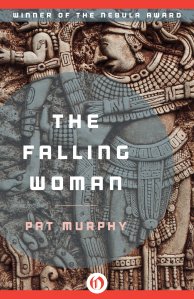 Pat Murphy’s The Falling Woman (1986), which won the Nebula Award, reads like literary fiction, with a touch of mysticism. (Perhaps it wouldn’t have been published without the SF label.)  The setting is an archaeological dig on Mexico’s Yucatan peninsula.  There are two heroines:  the chapters alternate between the viewpoints of Elizabeth Butler, an archaeologist and expert on Mayan civilization, and her daughter, Diane, who was raised by her father but after his death shows up unnanounced at Elizabeth’s dig.

Elizabeth barely knows her daughter. She was miserable in her marriage.  After she attempted suicide and was locked up in a mental hospital for  a year, she left her husband, moved to New Mexico, typed for a living, and got an education.   Elizabeth’s  “madness” has helped her make discoveries:  she sees Mayan ghosts in temples and villages as she walks around the excavation sites.  Her relationships with ghosts, and a casual friendship with her archaeologist colleague, Tony, are sufficient for her.  She doesn’t like emotions dredged up.

She is not a romantic.  When a reporter interviews her for a popular women’s magazine, she says,

I dig through ancient trash…. I grub in the dirt, that’s what I do.  I dig up dead Indians. Archaeologists are really no better than scavengers, sifting through the garbage that people left behind when they died, moved on, built a new house, a new town, a new temple.  We’re garbage collectors really.  Is that clear?”

Diane obviously wants to get to know her aloof mother,  but she also discovers she enjoys helping an archaeology graduate student survey the site.    Then something eerie happens.  Like her mother, she starts to see and hear Mayan ghosts.

I dreamed that i heard voices, unfamiliar voices.  In the private darkness behind my closed eyes, I listened, but I could not understand the language that the voices spoke.

Ghosts never see Elizabeth, but something uncanny happens:   a Mayan female prophet begins to talk to her.  She tells Elizabeth that she did not “know that shadows dreamed.”  Elizabeth learns more than she wants to about the gods and sacrifices.  She has always in the past justified Mayan sacrifices as similar to the Christian Eucharist.

The writing is eerily beautiful, and I loved this book.  It is a classic  about a mother-daughter relationship as well as SF.