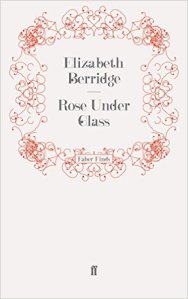 On a gloomy, rainy day like today (where are we, England?), I turn on all the lights and curl up with a cup of Earl Grey.  If I am not writing this blog, I am almost certainly reading one of my favorite authors.  It could be Charlotte Bronte, Barbara Pym, or Elizabeth Bowen.  It is unlikely to be Hemingway or Norman Mailer.  Yes, I am a fan of women’s fiction.

One of my new favorites is Elizabeth Berridge (1919-2009).  The characters in her superb novel, Rose Under Glass, are domestic but also adventurous as they try to find, or avoid love. Berridge is little-known in the U.S., and not very well-known in the UK.  Her obituary at The Guardian called her “a writer of rare distinction who deserved more recognition than she ever received.”

I discovered her work by chance on the lists of reprinted books at Faber Finds  and Persephone Books.  I recently read Rose Under Glass.  This beautifully-written, fascinating novel tells the story of several characters in 1950s London: at the center is 45-year-old Penelope Hinton, a widow whose husband Jamie, a famous artist, recently died.  He stepped off the curb in front of  a lorry while preoccupied with cricket (or perhaps football?) scores.  A fortuneteller had predicted his death to Penelope, and she very much resents that the woman “with a dusty bang and pale eyes” dared know the future.

The marriage of Penelope and Jamie was unusually close:  they were so close that one day at tea their oldest daughter bitterly tells Penelope they ignored and neglected her.  Penelope dismisses her daughter’s complaint, but cannot stop grieving for Jamie.  She fills her day with visits to museums and parks, but they no longer mean anything to her.

They related to nothing, so, terrifyingly, she felt nothing.  Nothing revived her.  Staring at the stone emperors, she thought, “We are two stone people, face to face.”  In the past, she had loved the ceramics at the Victoria and Albert Museum, the tiny miracles of the jewelled watches and snuffboxes.  Now they shone up at her dully, dead in their glass coffins.  Neither did the compassion and depth of Rembrandt’s paintings at the Wallace Collection, revive her, although the spaciousness and cold elegance of the house itself eased her by enclosing her in its own mood of petrifaction.

The terror of feeling nothing:  in middle age this strikes as a warning.

But Penelope is not alone for long.  Shortly thereafter, she meets Pye Rumpelow at a launderette.  He owns a chain of launderettes and coffeehouses.   He came up from nothing, is brilliant, self-educated, and cultured.  Everything he touches is golden:  it is a joke that he cannot stop making money. And he finds Penelope the most golden treasure of all.

She likes him, but is terrified of his love.  Every feeling makes her feel unfaithful to Jamie.  But he shows her something new:  he takes her on a walk to see one of his favorite views.   In the middle of a bridge, they look at the Houses of Parliament, the dusky, melting river, and Big Ben.  When Big Ben chimes at 7, she has a new memory, he tells her.  He likes to remember the date and time.

As their friendship develops, he suggests she move to a new flat, away from the memories that so constrict her life.  And so she writes and offers her flat to a friend’s son,  Spencer Manley, a bookstore clerk who lives in Wales with his lovely wife, Nika, and their two children. They move to London  so he can start a publishing company with his friend Stefan, who has worked in publishing for years.

As you can imagine, things are not easy for Nika and the children.  Life in the country was idyllic: they had a garden and a pony. The boy Lewis is struggling at a tough school.  He hates London.  But Spencer no longer notices or cares much about his family; he works round the clock with  aggressive, ambitious Stefan, who is only just humanized by his lover, Bonny, a best-selling romance writer who has begun writing historical novels. Then  Pye becomes a partner, and  reins them in when they want to compromise their ethics.

As Penelope and Nika approach an emotional crisis in their love lives,  Penelope  feels she must get away.  She brings Nika with her on a Mediterranean cruise.

One of the things I love best about the book is the travel narrative, which is partly in the form of correspondence.

Nika, who doesn’t quite understand Spencer’s indifference to her, writes:

I’m keeping a journal to show you when I get home.  It’s all so terribly exciting.  Venice was marvellous, but how I wish you had been with me!  We could have  taken a vaporetto and gone swishing down the Grand Canal to the Lido, where it was hot enough to bathe and not crowded….

Penelope, who is not sure what she really thinks or feels, writes to Pye:

Is it possible to come to Greece and remain unchanged?  In a queer way what you started, Greece is carrying on.  Here there is something painful and unavoidable in the very clarity of the air.  The sun strikes sparks from the sea as we cruise between these delicious islands, strikes sparks from the piled white houses, magnifies the details of the statues (so that even I can see them without my glasses); the honey-coloured columns of ruined temples…

I very much enjoyed this book, which is not entirely cozy:  there are a few dark turns along the way, and certainly things do not turn out perfectly.    I look forward to reading her collection of short stories, Tell It to a Stranger (Persephone).