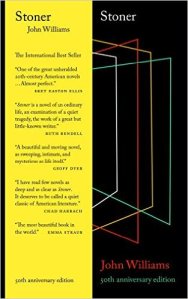 I am a great fan of John Williams’s historical novel, Augustus, which won the National Book Award in 1972.  This stunning novel did not, however, cause a ripple when it was reissued by NYRB last year.  In the twenty-first century, Augustus has been eclipsed by Williams’s 1965 novel,  Stoner, the chronicle of the quiet life of a profoundly decent, if flawed, professor in the Midwest.  Readers love it.  Critics love it.  And the British love it so insanely they think they discovered it: the great Julian Barnes wrote in The Guardian  in 2013, “There is a further oddity about the revival of Stoner: it seems to be a purely European (and Israeli) phenomenon so far.”

And yet I put off reading it.  It looked a bit stodgy, sentimental. We have the 2006 NYRB edition, and this fall a 50th Anniversary hardcover edition was published.

I put off reading it until I read Elaine Showalter’s article in The Washington Post,  “Classic Stoner? Not So Fast.”  She dismisses Stoner on grounds of sexism, the portrayals of two “crippled” villains, and Stoner’s pedagogy.  Mind you, I am a feminist, but not so fast, Elaine.

And so I finally  fell into the quiet, well-crafted story of a farmer’s son who becomes a professor.  Is it a classic?  Perhaps.  Do I agree with Showalter?  Not at all.

This engrossing novel reminds me very slightly of The Professor’s House by Willa Cather, who was the original great chronicler of quiet lives in the Midwest and West.  Her protagonist, Professor Godfrey St. Peter, has a midlife crisis after his two daughters marry and he and his wife buy a new house.  He stays on in the study in his old house for some peace and quiet, and to contemplate the strange trajectory  of his not altogether satisfying life.  One of his greatest sorrows is the loss of  his most brilliant student, Tom, a great Latinist, in World War I.  Stoner’s most brilliant student is also a great Latinist but is lost in a different way.  I’ll get to that. 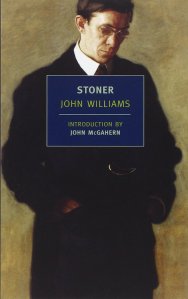 William Stoner, the hero of Williams’s novel,  is the son of a poor farmer who has never questioned or felt much until he takes an English course at the University of Missouri, where he is majoring in agriculture.  He is baffled by the reading for a required English course.  He certainly doesn’t understand his professor’s passion, but he works hard, and one day  is overwhelmed by the beauty of language.  He drops agriculture to study classics and English.  He doesn’t tell his parents until graduation that he isn’t coming back to their farm.  Advised by his mentor, he goes on for a Ph.D., and  does not enlist in World War I with his two friends, one of whom dies.  He gets some flack for that, but does not regret his choice.    And then he becomes an assistant professor at the university.

He loves teaching and is good at it, and his life is utterly quiet.

That is, until he marries Edith, a neurotic, pretty blonde who fears sex, dirt, and other human beings. At first I thought she was pregnant with another man’s child, because she insisted on getting married quickly, without a big wedding or so much as a passionate make-out session first.  She tells him  she hopes to be a good wife, but she avoids him at their own wedding reception.   It turns out she has never heard of sex, and vomits after they have it for the first time.  (She says it’s the champagne.)  I felt compassion for her exhaustion by obsessive housework  and perfectionism at dinner parties.  She is abnormally exhausted, and Stoner doesn’t judge her for that.   But when she decides to have a baby, she becomes a  nymphomaniac until she gets pregnant.  Then poor Stoner is sent back to sleeping on the couch.   After she gives birth, she is bedridden.  For the first few years of their daughter Grace’s life, Stoner cares for her.  When Edith finally gets out of bed she jealously sets out to divide and conquer.   Grace and Stoner cannot be together without Edith’s making a scene.

This is where Showalter gets very busy in her criticism.  She calls Edith  “a faculty-wife version of Zelda Fitzgerald,” apparently because both are mentally ill, and both do arts and crafts, like all good psychiatric patients.  Showalter thinks the multiple symptoms of Edith’s mental illness are a joke, merely the distortion of a misogynist. Alas, mental illness is not a joke of the patriarchy.  Welcome to bipolar disorder, Elaine.

Then department politics ruin Stoner’s life.  Anyone who has gone to grad school has observed a thing or two about department politics.  Hollis Lomax, the chair of the department, a hunchback with “a matinée idol’s face,”is brilliant but sardonic, like a million professors.  But he turns on Stoner after Stoner fails his protegé, Charles Walker, in a seminar. Mind you, Charles is a lazy bum, but he is also “crippled.”  That’s a LOT of disabled people for a fictional English department.  And that “cripples” have power over Stoner is a clumsy metaphor, which certainly Williams would not use today.  After Stoner also fails Charles in his orals (everybody except Lomax thinks he failed), Lomax sets out to ruin Stoner.  Even though Charles eventually passes his orals, Lomax wants revenge.  He assigns Stoner  only freshman composition classes.

Stoner has a love affair with Katherine, a brilliant instructor who is working on her Ph.D.  She  audited the class which  Charles Walker attempted to disrupt:  Charles’s oral presentation was an extempore attack on Katherine’s well-researched presentation, rather than a paper on the subject assigned to him.  Katherine and Stoner spend all their leisure together.  It is like a marriage. Both are excellent Latinists and fascinated by Renaissance literature.  Yet the relationship cannot last.   When Lomax gets wind of it, he threatens to ruin Katherine’s career.  She leaves town.

In spite of all this, Stoner survives.  He reads, teaches, and makes peace with himself. His not very interesting, but in many ways typical, life is celebrated in this quiet novel.  And I loved it, despite its departures from political correctness.