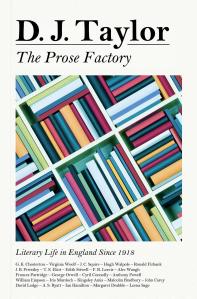 “What is ‘literary culture’?  And what is ‘taste’?” asks D. J. Taylor in his immensely readable new book, The Prose Factory: Literary Life in England Since 1918.

The result is a compelling history of a century of writing, brokering, publishing, marketing, reviewing, shaping of taste, and selling of books in England.

I love reading books about books, and I admit I am partial to the list-making possibilities of reading such books.  While reading The Prose Factory, I made a long list of writers to read, among them Theodora Benson, Julia Strachey, Francis King, Julian MacLaren-Ross, and Julia Darling. What I love about this book is Taylor’s  balance between highbrow and middlebrow authors. Taylor, an award-winning novelist and biographer, knows how to tell a story, and thus has the advantage over many critics.  His story is about the impact of middlebrow fiction as well as classics, and how writers of all genres make a living.

One chapter is even entitled “Highbrows, Lowbrows, and Those In-Between.”  Taylor begins by sketching the mass readership of best-selling books in the 1920s.    He writes,

…J. B. Priestley’s The Good Companions sold so many copies at Christmas 1929 that a fleet of vans had to be laid on to deliver fresh stock to booksellers.  Simultaneously there lurked a suspicion that this new army of readers, whether clerks looking to be edified or housewives looking to be entertained, was potentially traitorous, all too ready to be lured away by the blandishments of radio, cinema and, as the interwar era wore on, television.  Even here, in an age where a six-figure copy sale of a novel that captured the public’s imagination was not unusual, it was feared that the book might soon revert to its former status as a minority interest, one among a dozen contending leisure activities, always likely to lose out in the race for novelty or to be swept away by the latest fashionable gadget….

Taylor tells us how Priestley’s Angel Pavement, the story of a group of sad lower-middle-class people who work in an office, influenced Norman Collins’s London Belongs to Me, centered on a group who rent rooms and apartments in the same house, and Monica Dickens’s The Heart of London, centered on a lower-middle-class neighborhood.  (I have read and enjoyed all three of these novels.)

There is also a chapter about Hugh Walpole, a writer of popular novels who was not satisfied with popularity.  Walpole tried to court writers and reviewers, even writing letters to reviewers who trashed his work.   His attempts to charm and make friends backfired.  W. Somerset Maugham destroyed his reputation in his satire of an opportunist writer based on Walpole in Cakes and Ale.

I am very interested in middlebrow novelists, and there is a lot about them.  But Taylor is equally at home writing about Anthony Powell (whom he also writes at length about); Virginia Woolf and T. S. Eliot; George Orwell (the subject of Taylor’s award-winning biography);  the critics F. R.  Leavis, John Carey, and James Wood; the Angry Young Men movement; and women writers of the ’60s, including Margaret Drabble, Nell Dunn, and Edna O’Brien. Did you know the  Booker Prize created a market for a new kind of literary fiction?  And that the  1980s was a particularly fruitful time for literary fiction?  There is an entire chapter on A. S. Byatt’s Fredericka Quartet.  He even writes about Paul McCartney  lyrics for “Eleanor Rigby.”  He also writes about the effect of the internet on publishing.

A brilliant book, and very enjoyable.  You can read it form cover to cover, or browse around.  It is a good read, or a reference book.

I have read several of Taylor’s books, and have written about them here and here.