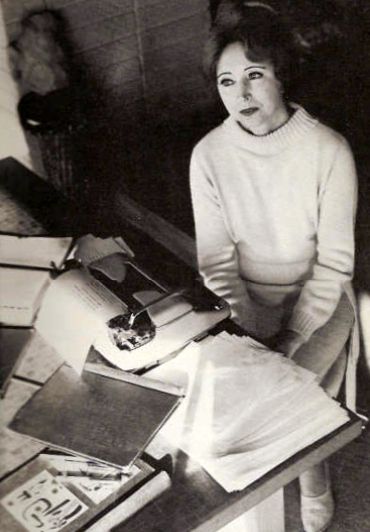 Anais Nin with her Olympia typewriter, 1963

WordPress stats tell me how many readers I have at Mirabile Dictu and whence they hail, mostly from the U.S., UK, and Canada.  The stats are not invasive, as they are at some blog platforms:  they refrain from recording every move your readers make and give you more privacy.  I assure you, I have no idea who you are.

That’s because most of the stats pertain to my own writing. I idly looked at them tonight:  I have written 872 posts in three years.  Oh, dear, I was startled by that stat.  Surely I could have written a book in that time.

Why don’t bloggers write books? Look at Ree Drummond at the Pioneer Woman:  her blog is  fun, she writes cookbooks, and she has her own cooking show. But her chatty style works better at her blog than in her humorous memoir, The Pioneer Woman: Black Heels to Tractor Wheels–a Love Story.  The humor at the blog, complemented by glossy pictures of the ranch in Oklahoma, her husband (Marlboro Man), children (homeschooled,) and dogs, seems more natural..

I’m not Pioneer Woman;  I’m a city gal!  I’m not that amusing. I’m not looking at cows, I’m not photographing my beagles, I don’t have any beagles, and  I’m in the house playing string with the cats.  String is the only game they’ll play  now.  I’ve rolled their  “busy balls” (plastic balls with little bells inside) across the floor and tossed their small stuffed animals in vain.  They lie on their sides and watch ME play.  Most embarrassing.

Essentially this is a book journal, not a collection of reviews. I jot my impressions of books and bookish subjects. Occasionally posts are review-ish, but not reviews. I  type some notes, I revise a little, and then I post the same day.

But I do wonder if I shouldn’t have been working on something else.  Do you ever feel that you were better on paper?  In school my notes were intercepted by a teacher who laughed and read them aloud. She said she thought I could be a journalist.  (And I did that for a while.)  I switched from writing by hand to a typewriter when I got a Smith Corona for my birthday. I typed on manual typewriters and, later, electric typewriters until I was forced to abandon my Luddite ways for work. 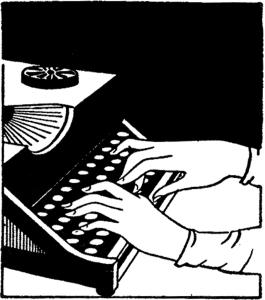 I loved my typewriter so much I took it on vacation. Like everyone else, I worked on a novel. I finished it, but never tried to publish it, because it wasn’t good enough, though I could probably have cobbled it into what was then called chick lit. But I stayed in the hotel and read and wrote –by Day Two  I was into vacation reading form–and I remember how annoyed I was when I got home and discovered I had missed an assignment for an airline magazine.  That was before cell phones and computers and constant checking of messages.  On vacation we were more or less on vacation.

Here’s what I think when I go back and look at my early stuff:  my prose was cleaner and crisper.   Even the wordy typing exercise “The quick brown fox jumps over the lazy dog” was leaner than much of what’s on the net.

Our local newspaper now looks like a blog.  They fired all the senior writers or gave them early retirement and have hired young writers who turn in lists and photographs instead of articles. Their degrees are in something called Communication.  I don’t know if their editor has any experience in journalism.  Is there such a thing as journalism?  Often the front page of the features section is one huge picture with a couple of very silly paragraphs beneath.  And the real feature writers are publishing on the front page, presumably because there are no reporters left. 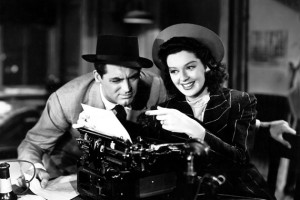 Cary Grant and Rosalind Russell work together on a story in “His Girl Friday.”

And so I miss typewriters and the days of The Front Page and My Girl Friday.  Even though, I must admit, you’re in danger of losing your soul if you’re a journalist, because you write the same kind of stories over and over and then You Think You Know Human Nature.  (You don’t.)  My old typewriter is in the basement.  Should I get it out?  At least I’m not on the internet if I’m writing on a typewriter.

Naturally, I’m not the only typewriter aficionado.  (N.B. I’m not adding hyperlinks below, because I’m pretending I’m on a typewriter.  You’ll just have to hyperlink yourself. ) The award-winning writer Stephen Dixon, who uses a manual typewriter, told the Baltimore Sun that he typed only once on a word processor and hated it.  “I don’t like to work on anything electric. I feel creative on a manual. I love the keyboard action. It’s like playing the piano.”

Will Self said in an interview at Shortlist that he went back to using a manual typewriter. “I think the computer user does their thinking on the screen, and the non-computer user is compelled, because he or she has to retype a whole text, to do a lot more thinking in the head.”

And what do I say?  If I can find a working typewriter in the basement, I will experiment with writing the first draft of my blog on it.  Will there be a difference?  Who knows?

12 thoughts on “The Typewriter vs. the Computer”