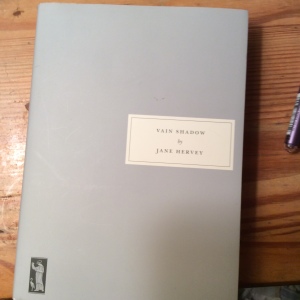 Last fall, after a trip to the Persephone store,  I read Jane Hervey’s Vain Shadow.   I did not take notes, because I was at a Costa Coffee at Trafalgar Square, slightly distracted by a German couple’s argument about “geld,” i.e., money.  (I sympathized, because they were buying big, expensive coffee drinks. COFFEE ADDICT’S TIP:   stick with the black brew or you go broke.)

Vain Shadow, written in the ’50s and published in 1963, is the story of a family funeral.  The prose is spare and lean, and the story goes at a rapid clip. At first I was uneasy with the truly horrible characters. Four members of the Winthorpe family have slept through the night, leaving Colonel Winthorpe to die upstairs alone with a nurse. Does it seem heartless?  Yes, because they knew he was dying.

Upjohn, the maid, brings Mrs. Winthorpe the news of her husband’s “peaceful” death along with the morning tea tray.  He died in his sleep at 2:30 a.m. Mrs. Winthorpe is relieved she’ll never have to kiss him again.

She tells Upjohn:  “And you’d better tell Mr. and Mrs. Jack and Mr. Harry when you call them…that it’s all over.”

Good God!  I  had never heard of anything quite like that, though there is usually some ugliness and bad behavior before a death. Even in dysfunctional families, somebody usually keeps watch on the dying, or at least personally breaks the news to relatives. (Of course, my family being what it is, they e-mail.)

Jack is the oldest son, an artist who was threatened with disinheritance by the crusty colonel.  He is irritated by the maid’s use of the phrase “passed away,” and wonders why women can’t say “died.” His much younger, lower-class former actress wife Laurine was terrified of “Father” and is relieved he’s dead.  She is naively sure that Jack will be a rich man and they will be able to afford a maid and a car.

A younger son, Harry, who seems slightly OCD, is a stay-at-home bachelor who loves to crochet. He takes charge of the funeral, and he knows he’ll be getting money. But their brother Brian, whom they delay calling, is furious, not because he wasn’t telephoned right away, but “because they had all gone trooping off to bed, calmly and obliviously sleeping while the Old Man died. And if that was not bad enough, they had actually not even allowed themselves to be disturbed by having the news broken to him that he had died.”

As you can imagine, Brian is one of my favorites, because he is at least human.  And he takes over the funeral, being the only one who knew their father wanted to be cremated.

But the most truly sympathetic character is Joanna, the rebellious granddaughter who is determined to leave her psychologically abusive husband, Tony, for a man she loves.  She realizes her cruel grandfather twisted her notions of love, and that’s how she ended up with Tony.  Harry admires Tony, who is charming on the surface and has come whining about Joanna’s affair.  Harry hopes to tie Joanna to Tony by tightly controlling the money left in trust for her. The colonel’s twisted authority may continue.

This harsh comedy portrays the ugliness of a death in a family where most are focused on money.  It is starker than appalling but comic scenes you’ve probably read, like the quarrel in War and Peace over Count Bezúkhov’s will (two women tug at a portfolio in angry silence) or the rage in Middlemarch over Mr. Pennyworth’s will. Vain Shadow is a desperate black comedy–desperately realistic and horrendous.

Much as I admired this very solid, well-written little book, I will not reread it.  Hervey is quietly effective, but nowhere in the class of Isobel English, whose stunning Every Eye I also purchased at Persephone and read last fall.  (I wrote about it here.)

And so I am giving away my copy of Vain Shadow.   If you would like it, leave a comment or email me at mirabiledictu.org@gmail.com