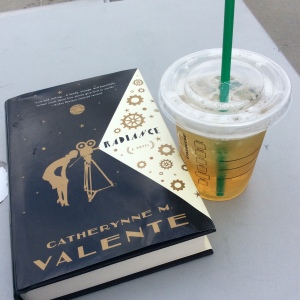 A book and iced tea.

It is an absolutely gorgeous spring day. Seventy-three degrees on March 7.  So lovely to glide out on my bike without a coat or hat. And the birds are back! The geese waddle on the bike trail, and the gulls are swooping over the creek.

I always stop for a coffee break and usually bring an e-reader, since reading on screens is now customary in public. But today I ventured out with a spellbinding book, Catherynne M. Valente’s Radiance.

Valente’s very strange meta-fictional SF novel, which she calls “a decopunk alt-history Hollywood space opera mystery thriller,” describes the movie industry on the moon in an alternate twentieth century.  Thomas Edison’s family holds patents for movie-making, including auditory equipment, but silent films are art and talkies are despised. At the center of Radiance is a mystery:  the famous documentary maker, Severin Unck,  the daughter of a famous filmmaker, Percival Alfred Unck, disappeared on Venus while making a documentary, The Radiant Car Thy Sparrows Drew, about the destruction of a settlement on Venus.

Really, I can’t put the book down.  Valente’s language is exquisite and lyrical, the story at times whimsically fantastic, at other times boldly noirish.  It unfolds in a pastiche of documentary scripts, gossip columns, diaries, and case logs.

Here is an excerpt from a kind of satiric noir film log by Anchises St. John, the last survivor of the destroyed settlement on Venus, now living in a godforsaken town in Uranus.  When we first meet him, he wanders into a theater to see one of Severin’s films.  He is obsessed with her.  And he muses, just as everyone else does, about the fate of her final documentary.

Of her final film, The Radiant Car Thy Sparrows Drew, only four sequences remain. They’re all badly damaged.  Everybody copies them, cuts them up and spits them out again into endless anemic tell-all docs I wouldn’t wipe my feet on. The originals continue to putrefy in some museum in Chicago.  More people than you’d think go there to watch them rot.  I did.  It was comforting.  You plonked down your head against the cool wall on a soft pink Midwestern evening that seems impossible when you’re freezing to death on Uranus.  She flashes before your eyes:  a sprite, a fairy at the end of a long, dark tunnel,smiling, waving, crawling into the mouth of the cannon capsule with the ease of a natural performer.

Valente is a new writer to me, but she has won the James Tiptree Jr., Mythopoeic, Lamba Literary and Locus Awards.

Am really loving this book!