I’ve been laughing over Josh Hanagarne’s article  at Book Riot, “The Bookseller Who Saved My Collection.”   He  decided  to become a scholar, so he majored in philosophy for a semester and then “gave up immediately after finals.” But he still wanted to appear erudite, so he asked his parents for  a 1910 set of the Harvard Classics for Christmas. He writes,

On Christmas morning, I opened up the two massive boxes and looked down at the dusty, crinkled green spines as a cloud of dust billowed out.

No one was jealous of my gift, but my siblings were philistines, not at all interested in appearing to be serious scholars.

The idea with the 51-volume set was that it contained, according to Dr. Eliot, “A liberal education.” I started looking at the titles on the spines. I even recognized some of the names, like Plato. I had no idea who Benvenuto Cellini was, and I didn’t know what I Promessi Sposi was, but 51 volumes of knowledge!

Better yet, there were 52 weeks in a year, so I’d be done with my liberal education at the rate of slightly less than one book per week.

Well, it didn’t quite work out. He read a few and got bored.  And later when he tried to sell the set, the bookseller refused because he saw Josh hesitating.

I, too, have a weakness for sets.  Some are nice, some were just cheap, and I ‘ve replaced most with paperbacks over the years because I needed scholarly introductions to the books.

1 The Literary Guild classics.  I worked briefly at a bookstore where women were ghettoized as cashiers.  A charming colleague with a college degree (also stuck as a cashier) persuaded us to join the Literary Guild book club, which offered classics in sets of three.  She emphasized how much fun it was to receive books in the mail (long before Amazon, and she got free books for signing us up) .  I became  fond of these cheesy book club editions, though we must have been out of our minds since we could have bought nicer editions at a discount at the store.  But we were secretly radical:  we didn’t put our money back into a sexist bookstore.

2 Proust’s Remembrance of Things Past.  We were waiting for a Greyhound bus in Iowa City and stopped at The Haunted Bookshop, a used bookstore. I was thrilled to find a musty set of Modern Library editions of Proust.   I eventually replaced them  with a paperback set with D. J. Enright’s corrected translation, but the original Moncrieff  may well have been good enough.

Mine didn’t have dust jackets!

3 Trollope’s Palliser books.  I originally read these in mass market paperbacks, but for my second read bought a used set of these Oxford editions.

A set of the Pallisers books.

4. The Dickens set.  I bought an almost complete book club set of Dickens (Walter J. Black) when I was a teenager.  The down side?  They have no introductions, so  I later supplemented them with Penguins.  Nowadays these hardbacks (two volumes for each title) are convenient because they have big-ish print.  But I had to lug them home in two trips!  None of us had a car back then.

5  Thomas Hardy (Heritage editions).  I love these Heritage Book Club hardbacks of five of Thomas Hardy’s most famous novels. They come in boxes and have great illustrations! Here’s a copy of Jude the Obscure.

6.  The Bronte set.  I really don’t know what got into me.  This illustrated Folio Society set of the Brontes  was cheap and looked very nice in the picture at eBay.  Well, it is nice in a way, but the covers are silk, which wasn’t clear to me, and you have to be careful not to stain them with tea.  The best thing I can say about it is that I finally have an illustrated copy of Villette. 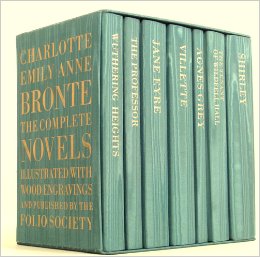 If only they weren’t silk!

Have any of you gone mad for a set?  Loved it or regretted it?