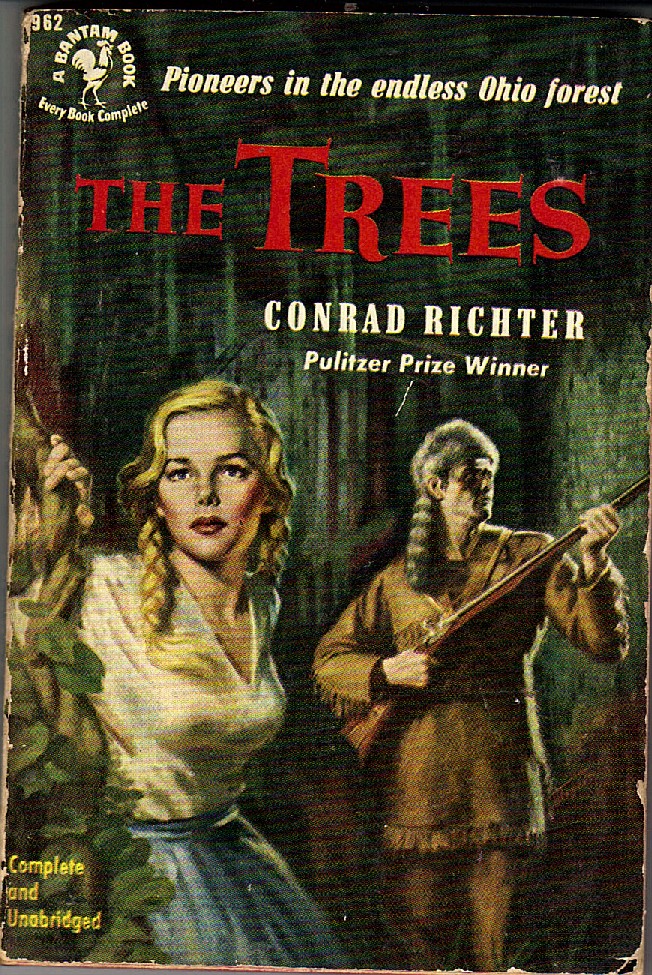 My reading is nothing if not eclectic.  I have recently read (a) a neglected American classic about pioneer life by Conrad Richter; (b) a well-crafted novel by the English/European writer Sybille Bedford; (c) and a light romance by Margery Sharp.

CONRAD RICHTER’S THE TREES (1940).   This is the first novel in Richter’s lyrical  trilogy, The Awakening Land.  He won the Pulitzer for the last book in the series, The Town, and the National Book Award for The Waters of Kronos (which I wrote about here). Alas, the trilogy is out of print in book form, but an e-book is available.

Richter’s beautifully-written novel is reminiscent of Willa Cather’s pioneer stories.  it unfolds in a simple, third-person narrative, sometimes omniscient, other times from a single character’s point of view.  It begins with the Luckett family’s difficult  journey from Pennsylvania to the woods of Ohio.

It was the game that had fetched the Lucketts out of Pennsylvania.  Months before the chestnut burrs had begun to sharpen, Worth Luckett looked for a woods famine.  It would be like nothing since the second winter after Yorktown, he claimed. He spent so much time in the woods with nobody to talk to but Sarge, his old hound, that when he opened his mouth Jary had learned to pick up her ears and listen.  For a month he had been noticing sign.  The oaks, beeches and hazel patches would have been slim mast for bears and pigeons this year.  Deer paths lay barer than any time he could recollect of fresh droppings.  And now the squirrels were leaving the country.

This family is smart, tough, and barefoot.  Nobody ever complains.  Worth Luckett is an adventurer, and his family has to put up with it.  Jary, his sociable wife, has cancer and hates living under “an ocean of leaves” in the thick forest with no neighbors.  Sayward, the oldest daughter, is smart and quiet, the one who takes responsibility when multiple tragedies occur.  ( I’m still  recovering from a couple of the traumas.)   Genny, the second daughter, is an attractive girl who  marries an abusive man.  The middle daughter, Achsa is treacherous, wanting what Genny wants.   Wyatt, the only son, longs to grow up and go hunting like his daddy; and Sulie, the toddler,  is hilariously optimistic. After visiting a general store, she declares, “We mought even git rich and have shoes!”

When they find a place to live, Worth takes off.  He is too busy exploring and hunting  to build a cabin, and they are camping out in a lean-to.  The leaves begin to fall, and at least Jary can see the sky then.  Then she presses Worth to build the house.  They can’t winter outside in the woods of Ohio.

The “ocean of leaves” can be claustrophobic.

Down in Pennsylvania you could tell by the light.  When a faint white drifted through the dark forest wall ahead, you knew you were getting to the top of a hill or an open place.  You might come out in a meadow or clearing, perhaps even in an open field with the corn making tassels and smelling sweet in the sun.  But away back here across the Ohio, it had no fields.  You tramped day long and when you looked ahead, the woods were dark as an hour or a day ago.

Gorgeous writing, and he uses dialect in the dialogue.  Is that the difference between Cather and Richter and why readers prefer her?  Richter explains in the acknowledgements that he tried to recreate the pioneers’ “mode of speech and thought” from  research, interviews and conversations, and his own memories of descendants and neighbors of pioneers in the mountains of Pennsylvania.

A great book!  At Goodreads several reviewers say this is their favorite book, and I can see why.  I especially love Sayward, the stable center of the house in the woods. 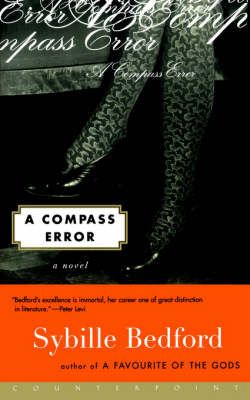 But I love the character.  Young Flavia is  alone, studying for Oxford entrance exams in a town in France, while her mother, Constanza, a divorcee, travels with her lover, Michel, a writer.  They are waiting for his divorce from his first wife, who has not lived with him for years. Constanza is excited about marrying a man she loves.  (Her first marriage was unhappy.)

Meanwhile, Flavia reads and writes essays.  And because she wants solitude, she deceives both Constanza and their friend Mr. James, writing letter that imply that she is not alone.  She has a tight routine, until an artist’s wife, Therese, notices her eating alone in a restaurant and decides it is inappropriate.  Therese invites Flavia to eat dinner with her family every night.  They become lovers.

But that is innocence, though perhaps not quite what Flavia’s mother would want.  Then  a femme fatale comes to town and seduces Flavia, and we all want to say, “No! NO!”  I won’t tell you what happens, but it is devastating.  It’s not the lesbianism, mind you; it’s the purely evil character of this seducer.

Parts of this are very good, but it is just a good read, and disappointing after A Favourite of the Gods.

MARGERY SHARP’S THE NUTEMEG TREE.  Is it possible to be too light?  Sharp’s light romances have been much praised by many bloggers, but my reaction is, Why?

Several of her light comedies have recently been reissued as e-books by Open Road Media.  They are definitely fluffy airplane reads:  if only I had had Martha in Paris (which I wrote about here) on my trip to London.

The Nutmeg Tree is charming and witty, but  D. E. Stevenson and  Angela Thirkell are deep and dark in comparison!  The beginning of The Nutmeg Tree is very, very funny. Julia is singing in the bathtub, while in the other room the bailiffs are rattling the doorknob and pleading with her to pay the five pounds she owes.  Eventually she sends them to fetch a pawnbroker she knows; he buys some of her stuff as a favor and she antes up to the bailiffs.  She has just enough money to travel to France to visit her daughter, Susan, whom she hasn’t seen in many years (Susan has been raised by her grandmother).  Susan has written to her about a young man she is engaged to, whom her grandmother doesn’t approve of.  And so Julia is off to give advice.

Julia reads The Forsyte Saga, so she’ll seem like an intellectual, not understanding that it is middlebrow fiction!  And as a former actress, she can’t help being impressed by a handsome trapeze artist she meets on the boat.  Fred’s mother is seasick, so Julia takes her place in the night’s performance.

And then she is off to see her daughter’s, and there is much romance and comedy.

Just so you know what you’re getting…it’s more an entertainment than a novel.  And that certainly has its place.

13 thoughts on “The Great, the Good, & the Light: Conrad Richter’s The Trees, Sybille Bedford’s A Compass Error, & Margery Sharp’s The Nutmeg Tree”