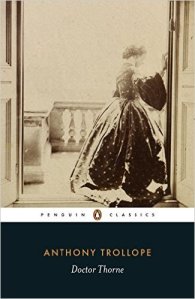 Oh, Anthony Trollope!  I’m besotted with you.  “How do I love thee?  Let me count the ways.” In my twenties I binge-read the Palliser series and the Barsetshire novels; then I discovered two of his most powerful  novels, The Way We Live Now and He Knew He Was Right; and in the last ten years have read most of the others.  (Many are superb.)

So I was thrilled to find a link in an email to Laura Miller’s essay at Slate on Julian Fellowes’ new TV adaptation of Trollope’s Doctor Thorne.  (I still erroneously think of Slate as a kids’ paper, but I’ll read anything on Trollope.)  Miller enthusiastically reread Doctor Thorne, the third book in the Barsetshire series, before she viewed the film. She loves the book, but considers the new  miniseries the worst Trollope adaptation ever.

Nonetheless, Miller will make you want to read Trollope, if you have not yet discovered him.

Anthony Trollope’s “great, inestimable merit,” Henry James once wrote, “was a complete appreciation of the usual.” He was right: You won’t find a single uncanny moment in that Victorian author’s 47 novels. Yet reading Trollope in the 21st century can nevertheless be a bit spooky. That’s because seemingly everything that happens today has already been covered in one of his books, albeit in a less technologized form.

Yes, Trollope does write about everyday life, as Mr. James says, but he also has great psychological depth, for which he is not given sufficient credit.  As Miller points out, he has written about all things modern.  I have been astonished  by his insights on  love, marriage, divorce, church politics,  Ponzi schemes, psychological abuse, and corrupt elections. And I do think he had his “uncanny moments”:  he even wrote a science fiction novel, The Fixed Period.

Miller is very slightly condescending about Trollope. That’s the way of critics with nineteenth-century novels. She  trots out the cliché about Trollope’s digressive fox-hunting scenes and descriptons of Tudor houses.  At this point I no longer think those are digressions.  Does that mean I’ve read too much Trollope? 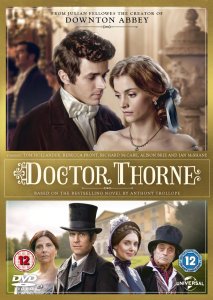 Ellen Moody, the author of  Trollope on the Net, also panned the new Julian Fellowes adaptaion at her blog, Ellen and Jim Have a Blog, Two.  Ellen, who recently taught a class on the Barsetshire novels, has read all of Trollope multiple times and knows more about his books than almost anyone.

Julian Fellowes has managed to turn the novel Michael Sadleir ended his ground-breaking study of Trollope on (the book that first attracted respectable attention to Trollope — with preferring Dr Thorne to The Way We Live Now) into an embarrassment. A telling travesty. Reviewers veer from lamenting the very existence of this throw-back to picturesqueness as a travesty to earnestly showing how it has eliminated just about everything that counts in the novel. Viv Groskop of The Guardian suggested we take a drug to forget this disgrace. The courteous and judicious Alison Moulds of the Victorian clinic demonstrated the central matter of the tale, medicine and illness, comic and tragic, is left out. As might have been expected, Philip Hensher of the Telegraph demonstrates that the point Fellowes gets across (and by implication, Trollope’s) is that it’s impossible to cross (ontological?) class boundaries.

3.  Looking for something light to read?  Check out Jeff Somers’s “10 Tricks for Book Nerds who Want to Fit in Reading Time At Work” at Barnes and Noble Reads.

4. I very much enjoyed this post by Random Jottings on Robert Barnard’s superb mysteries, which Pan Macmillan has reissued.  (I’ve long been a fan of Barnard’s books.) 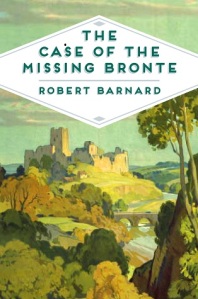