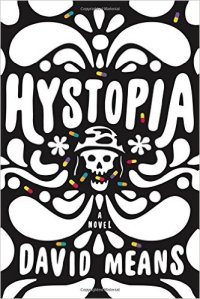 The perusal of the Man Booker Prize longlist is a summer ritual. We were jaded about the prize for a couple of years, but now we’re back. I’ve added a few of the longlisted books to my summer reading, and I highly recommend David Means’  SF novel, Hystopia, a trippy alternate history of the 1960s.

Means has constructed a flamboyant meta-1960s novel within a novel, framed by the fictional editor’s notes, including excerpts from notes of the  fictive author, Eugene Allen, a Vietnam vet, and  interviews with his friends and neighbors. The editor’s notes provide a pseudo-scholarly text that offsets the linguistic pyrotechnics of Eugene’s novel, published after Eugene’s suicide.

The manuscript was found in the drawer in Allen’s room by his mother, Mary Ann Allen, who gave it to Byron Riggs, professor of English at the University of Michigan, who in turn passed it on to his good friend, the writer Fran Johnson, who subsequently sent the manuscript to her agent, who, with the permission of the Allen family, submitted it to publishers, who, as they say, went into a frenzied bidding war that had little to do with the so-called marketability of the novel itself because, as most admitted, openly, the book was hardly fit for the fiction market at the time (or any time) but was publishable because of the marketability of the so-called backstory: a twenty-two-year-old Vietnam vet sits at his desk and composes a fictive world that is—as the critic Harold R. Ross stated—“ bent double upon itself, as violent and destabilized as our own times, as pregnant and nonsensical.”

In Eugene’s novel, the U.S. is fractured by violence:  Kennedy has survived the assassination attempt and is in his third term as president, but his wave-by tours in an open car attract other would-be assassins.   Vietnam veterans are shipped to Michigan to be treated by the Psych Corps established by Kennedy to treat mental illness in general but especially to deal with the problem of returning Vietnam vets. The treatment, known as “enfolding,” combines a dose of a drug called Tripizoid with a reenactment of the traumatic events by actual actors, which results in “enfolding” the memories, i.e.,  amnesia about their tours of duty.  But the drug doesn’t work on everyone, and psychotic vets are terrorizing Michigan, which is burning as a result of fires started in Detroit and Flint during riots.

The novel centers on tracking down a rogue vet, Rake, a mass murderer.  He has recently kidnapped Meg Allen (the sister of Eugene, the author), from the mental health facility where she was being treated for her nervous breakdown after the death her soldier boyfriend Billy-T.

Early on , one of the heroes of the novel, Singleton, a Psych Corp agent, is listening to his boss Klein’s analysis of Rake.  There are references to  pop culture, acting, and “Brando syndrome.”

“Yes, Brando syndrome. I’ve thought of that. And Dean. Most of the dramatic types imagine themselves as inheritors of a great rebellious tradition and see no need to find a cause for their rebellions, so they lean toward Dean. Auden said, ‘It’s the insane will of the insane to suffer insanely.’ Something like that. It’s the same with actors. The line between what they’re presenting and their own inner life thins, if they’re weak of will, and the character they’re embodying becomes the body they’re presenting, something like that. When you consider the fact that Rake is a failed enfold and he has dramatic inclinations … I hope you’re listening to me, Singleton. We’re talking about grunt-level thinking, and to get to that you have to go to the random particulars, or the particulars that seem to map out the random.”

Work in the Psych Corps bureaucracy is dull:   Singleton, an “enfolded” Vietnam vet,  wants action.  He embarks on an illicit affair with Wendy, an agent recovering from the crippling of her  boyfriend in Vietnam.  (Psych corps agents are forbidden to “fraternize” with each other). The two of them spend much time trying to understand their emotional numbness:  Vietnam permeates every aspect of American life.   Then, one day a mysterious man approaches Singleton:  he identifies himself as the chaplain in Vietnam who used to give him “the good stuff” and gives  Singleton some blue pills.  Singleton begins to remember bits of his tour of duty, and the blue pills enhance the connection between him and Wendy.  And when Singleton gets a tip about Rake’s whereabouts, he and Wendy hit the road.

Meanwhile, Rake has inflicted his violence on more people.  Rake took Meg to the Michigan woods to stay with Hank, a Vietnam vet who  was once his sidekick. Hank is a reformed character who “enfolded” himself with a dose of Tripizoid while his  Mom-Mom tied him up:  he now he is a peaceful man of the forest, and wants to stop Rake without any more killing, but it’s like living with a time bomb.   He guards Meg while Rake goes out on sprees and teaches her how to behave to survive.   He understands Rake’s psychology but doesn’t want to go one-on-one with him.

Here’s one of my favorite passages, describing Singleton and Wendy on the road:

For miles, as they continued north, the needle was still making a shish pop, shish pop, as it rode the eternal runout groove at the end of Fun House on the signal out of Flint, strong off the night sky until, finally, it merged with white static and became faint background sizzle while the state unfurled—the same stubbled fields and denuded trees and finless windmills and equipment left to rust—and then, finally, Johnny Cash pushed through, his voice weary and low to the ground as he sang a lament that seemed to match the landscape, speaking from within the prison walls to a train whistle out there.

This novel is Booker-worthy, as is Elizabeth Strout’s My Name Is Lucy Barton, which I wrote about here.

4 thoughts on “An SF Novel Longlisted for the Booker: David Means’ Hystopia”