The Book Vault in Osakaloosa

Today we drove to Oskaloosa, Iowa, a small town (population:  11,568). Why?  Well, this morning I was reading The Indie Bob Spot, a retired teacher’s blog about his trips to independent bookstores around the country.  Indie Bob says The Book Vault, a 10-year-old independent bookstore in Oskaloosa, is “not only one of the best in Iowa but one of the best in the midwest.”

My husband sighed and went so far as to say Indie Bob must be writing for money.  (No, no, no, no:  I know enthusiasm when I see it! )   The real reason we went:  the store is housed in a renovated bank, built in 1892.  We love historic buildings.  The best renovated bank ever is in Willa Cather’s hometown, Red Cloud, Nebraska.

Why is there a bookstore in such a small town?  It is owned by The Musco Corporation, a sports lighting company, which, according to Indie Bob,   “takes seriously the importance of having a vibrant, educated community and backs this bookstore, in part, due to the attractiveness of its presence when looking at prospective employees.” (That DOES sound PR-ish, doesn’t it?)

I walked into the store and loved the space. It is a three-story building (two open to the public), with rooms that run the length of the building, a vaulted ceiling, wooden floors and tile floors, balconies, and books in the bank vaults!

And the small collection is beautifully-curated, with a strong fiction and biography section, an Iowa books section in a vault, a fabulous cookbook section, and a test kitchen in the back. On the balcony are SF, children’s books, Y.A. books, and a few used books.

I found many books on my TBR  list (but of course could not buy them all):   I am dying to read award-winning Jonis Agee’s new novel, The Bones of Paradise, “a multigenerational family saga set in the unforgiving Nebraska Sand Hills in the years following the massacre at Wounded Knee.” Agee is VERY good.  I also long to read Garth Risk Halberg’s City on Fire, now in paperback.  And I considered a “Rediscovered Classic” published by Chicago Review Press,  Gwen Bristow’s  1959 historical novel, Celia Garth, about a dressmaker during the American Revolution who becomes a patriot spy.  (No idea if Bristow, a journalist-turned-novelist, was any good: perhaps she’s like Edna Ferber?)

And the mysteries are in a vault!  I think that’s the funniest thing ever.

The Mystery of the Book Vault: the mysteries ARE in the vault!

WHAT DID I BUY?  In the Iowa section, I found a new book published by University of Iowa Press, A Sugar Creek Chronicle: Observing Climate Change from a Midwestern Woodland, by Cornelia F. Mutel, a science writer.  She alternates journal entries of of a year of observations in the Iowa woods where she and her husband live with  memories of explorations of nature in Wisconsin when she was growing up and information about climate change.   It is beautifully written, and I am loving it.

I also bought an SF novel, Patrick Rothfuss’s The Name of the Wind, winner of the Quill Award.

I really did want more, but even I have limits.

And then we went next door to the huge coffeehouse, Smokey Row. 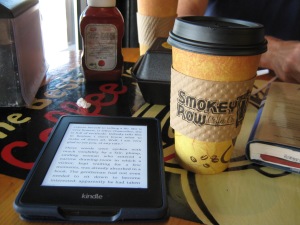 Below is a photo of me at me at Smokey Row. Since a recent–ahem!–birthday,  I look exactly like my Aunt Frances, a consumer economist whom we all greatly miss.  The great thing about going older?  It no longer matters how you look.  It’s who you are.

And here’s a blackboard with a quote from Willa Cather,  in front of the Smokey Row entrance to The Book Vault.

Next to Smokey Row is a picturesque alley, which has plants, iron tables, and posters of historical figures from Oskaloosa.  The only one you’re likely to recognize is Phil Jones, drummer for Tom Petty.

I was fascinated  Virginia Knight Logan, who sounds like a Willa Cather character!  She was educated in Chicago, was a soprano with the New York Opera company, and then moved to Oskaloosa, where she taught music.  Her son,  Frederic Knight Logan,who  studied music in New York, was  known as “America’s Waltz King” and the composer of the “Missouri Waltz.”

A lovely day in a small town!

8 thoughts on “Visiting the Book Vault in Oskaloosa, Iowa”