During my Balzac phase in 2013, I loved Père Goriot.  (The title of the Penguin is Old Goriot.)  I experienced the thrill of falling into a  spellbinding story and recognizing a tour de force. Père Goriot is said to be one of the best books in Balzac’s La Comédie Humaine (The Human Comedy), a cycle of approximately 90 novels, novellas, and short stories portraying 19th-century French society during the period of Restoration and July Monarchy.

Recently I had to read Père Goriot in two different translations for the usual reason:  my old Modern Library paperback fell apart.  Yes, the tape could no longer hold it together, so I hustled to get a replacement copy.   The Modern Library edition (translated by E. K. Brown,  1946) is out-of-print, so I switched to the Penguin (translated by Marion Ayton Crawford, 1951). 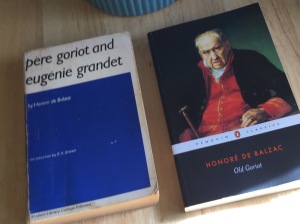 Obviously there was a call for translations of Old Goriot in the mid-twentieth century, with two translations for two different publishers.

Much of the book is set in a boarding house.  I am fascinated by tales of boarding houses–I did rent a room in college, as did most of my impoverished friends. (We had to feed ourselves in the attic kitchen, though:  no landlady made sloppy meals.) In this stunning classic, Eugene Rastignac, a poor law student who rooms in Madame Vauquer’s shoddy boarding house in the Latin quarter of Paris, becomes obsessed with luxury and women.  After attending a party at his cousin Madame Claire de Beauséant’s house, he wants what the rich have.  He borrows the savings of his mother and sisters so he can attain this ambition. Will he be able to pay them back?  In the glittering upper-class society, he finds incomprehensible social barriers, debts, and infidelity. He plans to use his new connections–but how?  And he goes home at the end of the night to his bare room.

He does not realize that Pere Goriot, one of his more eccentric fellow lodgers, has links to high society.  When Eugene sees Goriot leaving the beautiful married Countess de Restaud’s house by the back stairs, he tells her that Goriot lives at Madame Vauquer’s.   Turns out Pere Goriot is her father and she is ashamed of him. So she bars Eugene from her house, and, as an act of minor revenge, he courts her sister, Baroness Delphine de Nucingen, a banker’s wife who is also ashamed of her father.  They have an affair.

The boarders play a big part in Eugene’s life.  A strange man named Monsieur Vautrin advises Eugene to claw his way up through society by marrying a fellow boarder named Victorine, a disinherited heiress who he promises will soon be rich.  Vautrin has an evil plot…I He tells Eugene he will never rise unless he is ruthless.  Eugene is terrified.

On the other hand, Goriot is delighted with Eugene’s dallying with his daughter Delphine. He wants any news of his daughters, and Eugene can tell him about their clothes and parties.  Goriot used to be rich, but has given his daughters almost all his money.

Even in translation, the power of Balzac’s writing comes through.  And both translations are powerful, though I slightly prefer the lushly written translation by E. K. Brown in the Modern Library edition.  Here’s a sample paragraph of the Brown near the beginning.

The chariot of civilization, like Juggernaut’s, is barely delayed by  some heart which does not break as easily as others, and holds back its wheels; soon the heart is shattered, and the chariot continues its glorious march.  And you will do the same you who hold this volume in a white hand, and, sinking back in a soft armchair, say to yourself:  “Perhaps this book is going to entertain me.”  After you have read of the hidden sorrows of Pere Goriot, you will dine with a keen appetite and blame the author for your insensibility, accusing him of poetic exaggeration.  Oh, you may be sure that this drama is no work of fiction, no mere novel!  It is all true, so true that everyone may recognize its element within himself, perhaps in his very heart.

The chariot of civilization, like the chariot of Juggernaut, is scarcely halted by a heart less easily crushed than the others in its path.  It soon breaks this hindrance to its wheel and continues its triumphant course.

And you will show the same insensibility, as you hold this book in your white hand, lying back in a softly cushioned armchair, and saying to yourself, “Perhaps this one is amusing.”  When you have read of the secret sorrows of old Goriot you will dine with unimpaired appetite, blaming the author for your callousness, taxing him with exaggeration, accusing him of having given wings to his imagination.  But you may be certain this drama is neither fiction nor romance.  All is true, so true that everyone can recognize the elements of the tragedy in his own household, in his own heart perhaps.

They are very close, aren’t they? But Brown is more vivid and elegant.  At first Crawford seemed awkward to me, but I didn’t notice after a while.

The same few Balzacs are translated again and again, and I do wish there were new translations of the others.

What are your favorite Balzacs?   The original 19th-century translations are available free online, if you want to try them.

13 thoughts on “The Best of Balzac: Père Goriot”