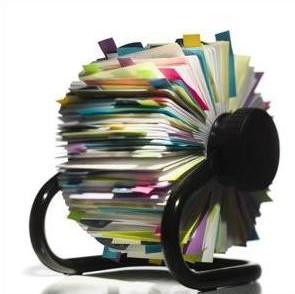 I need a Balzac rolodex.

I need a rolodex to keep track of the hundreds of characters in Balzac’s La Comédie Humaine, a cycle of approximately 95 novels, stories, and novellas.

Recently I have inhaled  three of the books:   Pere Goriot (a masterpiece:  I wrote about it here), The Chouans (a sentimental historical novel), and A Daughter of Eve  (an entertaining novella in which a megalomaniac journalist exploits the infatuation of a countess and his mistress-actress to found a newspaper).

The same characters often pop up in more than one novel.  Rastignan, whom we first meet in Pere Goriot as a poor law student intent on clawing his way up the ladder of high society through a love affair and connections, has a cameo role in A Daughter of Eve as the friend of the obnoxious journalist, Raoul Nathan. And Hulot, the smart Republican commander of  The Chouans, also appears in Cousin Bette (my favorite Balzac). (N.B. Both Rastignac and Hulot appear in other novels, too.)

There is a very helpful Balzac site, https://balzacbooks.wordpress.com/author/madamevauquer/, created by Dagny (Madame Vauquer), to support the reading of the complete works by a Balzac group at Yahoo.    She has posted an excellent list of recurring characters, but one has to scroll down and down and down.   A rolodex would be easier and quicker: one major character per card and the titles of the books in which he/she appears.  So like graduate school, no?

Am I reading the books in order?  No.  Some of the books are masterpieces, others are very slight (at least in translation.)   Start with one of the classics, like Pere Goriot, Cousin Bette, or Lost Illusions.

A FEW NOTES ON THE CHOUANS, THE FIRST IN THE HUMAN COMEDY. 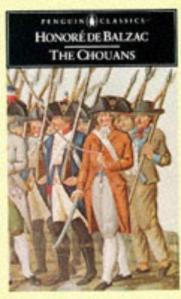 A few years ago I found a 50-cent Penguin copy of The Chouans  at the Planned Parenthood Book Sale.   I finally knuckled under and read this novel of the French Revolution, set in 1799.

Marion Ayton Crawford translated several volumes of Balzac for Penguin, including my favorite, Cousin Bette.  But  her translation of this 1829 historical novel  is very awkward.   Perhaps Balzac’s prose is rough in this early novel–I don’t read French.  And the influence of the romantic historical novels of Sir Walter Scott  may or may not be a plus for you.  (It was not for me.)

Balzac can be brilliant and polished, or lose himself in exposition.   That is the case in  the opening of  The Chouans,  where he devotes two and a half pages to descriptions of the costumes of the peasant royalists who have risen up in Brittany against the Republicans.

Here is an excerpt:

Some of the peasants, the majority indeed, went barefoot and were clad each only in a great goatskin, which reached from neck to  knees, and breeches of very coarse white cloth, whose rough badly-trimmed yarn was evidence of the region’s lack of  interest in industrial skills. Their long lank locks seemed part and parcel of the hair of their goatskins and hid their downcast faces so completely that at a first glance it was easy to imagine the goatskins to be their own pelt, and confuse these wretches with the animals that clothed them.

Balzac explains the peasants are nicknamed the  Chouans because they copy the hoots of barn-owls (Chuins) as warnings of ambush.  They are led by a French aristocrat, the Marquis de Montauran. He is a bit of dandy, but the men love him.

I find Napoleon’s Republicans more sympathetic than the Chuans–because of their clothes! (No, I made that up.)  I adore Hulot, the commander of the Republicans.  He is a smart, savvy soldier with a deep knowledge and experience of military strategies.  He immediately figures out that something is wrong when a  peasant named Marche-a-Terre shows up and dawdles in the middle of nowhere.

But most of the novel is devoted to a romance.  Marie de Vermeuill comes from Paris with a letter giving her command over Hulot, who temporarily resigns.   She is on a special mission to… Well, I won’t give it away. But at an inn she meets Marquis de Montauran (in disguise) and his companion Madame du Gua (who poses as his mother).  Marie and Maontauran fall in love… and the rest of the book is SO silly.

Moderately entertaining, but so badly written/translated!

Don’t start with this. You will be very disappointed.  And yet so much of Balzac is so very, very good.

I will write soon on A Daughter of Eve, which I much preferred.

Balzac is great escape reading.  If you’re depressed after the election, do read him.