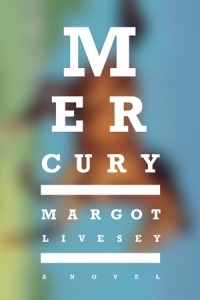 I said I would read one new book a week.

I slogged through 208 pages of Margot Livesey’s Mercury,  then skipped to the end.   My conclusion?  Fire the editor.

Livesey is a skillful, likable writer, and at her best she has an extraordinary imagination and a gift for moving a story vigorously forward. In the past her complex characters have included a modern Jane Eyre, an amnesiac, and a heroine with invisible companions.

You can almost see the outline of Mercury.  Like so many novels today, it lacks depth. Livesey’s unobtrusive style usually supports the unfolding of her narrative, but in this case the writing is leaden.

There is a coherent structure, but the narrative seems rushed.  Divided into three parts, the first and third parts of Mercury are narrated by Donald, an unhappy Scottish ophthalmologist in private practice who no longer does surgery.  The  middle part is narrated by his wife Viv, who left a corporate job to co-manage a local stable with her best friend, Claudia.

Donald and Viv’s marriage is disintegrating because their values have changed:  under the influence of a wealthy new friend, Hilary, Viv is pressing to send their son to a private school ($30,000 a year). Donald and Viv have always supported the public schools in their Boston suburb. He resents her neglect of the family as she works longer and longer hours at the stable.

And Viv’s narrative is even sketchier than Donald’s.  She didn’t achieve her goal to be a corporate CEO, so she quit her job in mutual funds.  Now at the stable she behaves like a CEO,  obsessed with training a horse named Mercury, covering up problems from her partner, and focused on winning competitions.  She becomes increasingly paranoid.

I’m not a horsey person, but this plot-oriented novel is not in the same class as Enid Bagnold’s National Velvet, mentioned here, Dick Francis’s thrillers, or Jane Smiley’s Horse Heaven. It is a weird marriage of literary and pop.  So disappointing, because Livesey is usually so good.

Do you think it a coincidence that two of the characters are named Donald and Hilary?  Well, yes, I do!

When pages are uncut in an old book, what do you do?

Online booksellers say to use an index card. Scissors work better for me. How about a letter opener?

I’m still living
in the dream we had,
For me it’s not over…
—Neil Young, “Big Time”

On Day Five after the election, I am still grieving.  It can’t be true…this is my country.

I rattle my pill bottles. Do you think Advil or Clariton would help?  (Homemade vegetable soup was the solution)

People are sad.  People are protesting. And people are desperately signing up for Obamacare before the Affordable Care Act is revoked.  According to Newsweek, more than 100,000 Americans signed up on Wednesday after Donald Trump won the election.

Live through the Nixon years, the Reagan years, and the Bush years, and you realize every generation has to fight over and over for human rights.  It is never over.  We signed the “I’m  Pro-Choice and I Vote” postcards 30 years ago and we still sign them.

One senses a certain Schadenfreude abroad.  Even in London, where I knew no one at all, I encountered anti-American feeling.  A chatty young clerk informed me  that the American governemnt was the worst in the world and that Obama had accomplished nothing. Not only was I the fattest person in the UK, but I had to be an American ambassador. I smiled, briefly praised Obama, and said Clinton would be the next president of the U.S.

Hillary Clinton did win the popular vote.  It’s a very precarious time, but all we can do is hope for the best. Let us hope the Republicans will reach across the aisles…work together with others…  I always have such beautiful dreams.

We can’t give up.

In a 1989 comic strip called “Point the Finger,” R. Crumb compared Donald Trump to Trimalchio, the vulgar millionaire in the Roman novel, Petronius’s Satryricon (which I wrote about   here).

As Crumb said, “And isn’t this a nutty kinda country where you can draw any irreverent, degrading thing about the most powerful people and nobody cares! You don’t get jailed. You don’t get persecuted. They just ice you out of the marketplace.”

All right, peace!  Here are four frames of the comic strip.  Laughter is good for us.