We don’t live in a world in which a cover can simply reflect the sense and style of the book. Today more than ever the cover shoulders an additional weight. Its function is much more commercial than aesthetic. It succeeds or fails in the market.
–Jhumpa Lahiri’s The Clothing of Books 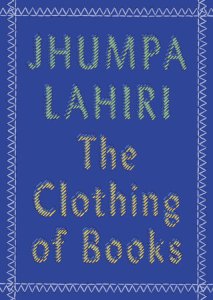 No one writes more exquisitely about the Indian-American experience than Jhumpa Lahiri, who won the Pulitzer Prize for her first collection of short stories, Interpreter of Maladies. Since then she has written a second collection of stories, two novels, and a nonfiction book, In Other Words, about moving to Rome and writing in Italian.   She has won many awards, including a 2014 National Humanities Medal presented by President Obama.

Her short new book, The Clothing of Books, is about book covers, a subject few of us readers can resist. God knows I have bought many books for their covers, or avoided those with ugly covers.  In this intelligent, charming little book,  Lahiri looks at the role of the book cover and   the negligible role of the author in choosing the design. Written in Italian as the  keynote speech for the Festival degli Scrittori in Florence, The Clothing of Books was translated into English by her husband, Alberto Vourvoulias-Bush.

She writes of the book cover as the clothing of books.  She begins by musing about her own ambivalence to fashion as a girl in the U.S.   She envied the uniforms of her cousins in India, because it gave them an identity and they didn’t have to worry about what to wear. Her mother, who still wears traditional Indian clothing,  picked out the wrong American clothes for Lahiri.  They did not understand American clothing.

However simple and functional, I found my cousins’ uniforms splendid, fascinating. On the street, on buses and trams, I was struck by this visual language, thanks to which one could identify and classify thousands of students in such a large and populous city. Every uniform represented belonging to one school or another. Each of my peers in Calcutta enjoyed, to my eyes, a strong identity and, at the same time, a sort of anonymity.

For Lahiri, the cover is a bit like fashion.  Sometimes it represents her and her words well, sometimes not.  For Lahiri, the cover signifies the end of writing a book, rather than the beginning, as it does for most of us.  She writes, “It represents a collective reading by the book designer and various people at the publishing house; it matters how they see the book, what they think of it, what they want from it.” 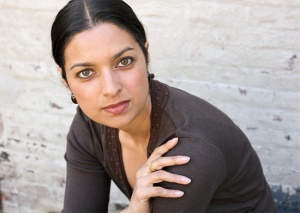 Her input as a writer in the book design is minimal, and she has never talked to a designer of a cover for her book.  Sometimes the editor listens to her criticism, but they decide the design without her.

It was different for Virginia Woolf, who founded Hogarth Press with her husband Leonard.  Virginia talked to her sister, the artist Vanessa Bell, about what she wanted in the design.  Bell did not necessarily read Woolf’s books first. They collaborated on the design.

Lahiri, the daughter of a librarian, misses what she calls “naked books.”  She has read many hardcover library books whose jackets were removed, because they are easily damaged in libraries. Lahir misses the days when she could read books with no summaries, autor bios,  blurbs, or other jacket copy.  (Personally I miss that smell of old book smell, from the special library binding.)

Lahiri’s fascinating new book is one of my favorites of the year.  I can’t imagine any reader not enjoying it.

8 thoughts on “Jhumpa Lahiri’s The Clothing of Books”