The Penguin or the teeny-tiny Oxford?

Many years ago, our calico kitten, Maxie, squeezed herself into a bricks-and-boards bookcase and scratched the top edges of many of our favorite books.  The tops of the pages of several Willa Cathers and Colettes are jagged.  But she was just so cute!   Eventually she grew too big to play with the edges as though they were her piano.

Books on the floor are also a problem.  Lulu, a black cat who did gymnastics and sang opera from the top of the refrigerator, ripped the cover off a big Webster’s Dictionary, and believe me, I need my reference books.  So the books live in boxes if there’s no room on the shelves.   This year I have  weeded dozens of books in an effort to display all our books.

But I have a problem.  Duplicates.  Sometimes I can’t decide which to keep.

I have two copies of Trollope’s He Knew He Was Right.  I love my Penguin and read it several times, but the cover is Scotch-taped on.  Recently I also acquired a teeny tiny Oxford hardback, whose print is actually bigger than the Penguin. But The Penguin has an introduction, and the tiny Oxford hardcover does not. And can the whole text really be in that mini-Trollope?  Well, I have done some beginning and end of chapter checks, and it seems to be.

Here’s the difference in print size:

Bizarrely, the Oxford print seems to be bigger.But the Penguin is close.  Do I want a bigger or a smaller book?  And will I need the biggest possible print someday?  Well, I must keep them both, because I can’t decide.

The Walter J. Black book club edition  and an Oxford of Little Dorrit

And what about Little Dorrit?  It is far from my favorite Dickens, but you will not be surprised to learn I have two.  When I was a teenager I bought a partial set of Walter J. Black hardcovers at Alandoni’s bookstore. Each title is divided into two volumes, with the original illustrations and huge print.   In the photo, you can see one slightly soiled (from many rereadings) volume of the Walter J. Black, complete with Maxie’s scratches.  As you can see, we also have a newish Oxford paperback, also with illustrations.

I had planned to get rid of the Walter J. Black, but you know what?  That big print might come in handy someday. And it has sentimental value.  My first Dickens set! 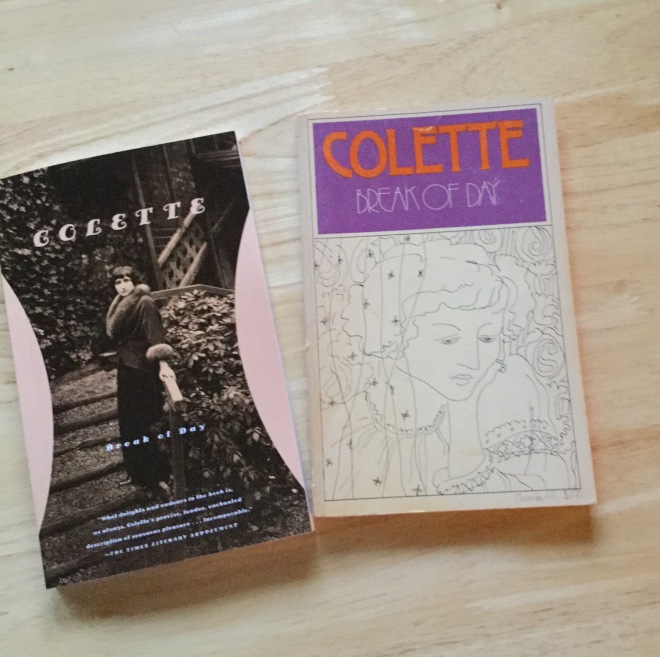 I have two copies of Colette’s Break of Day,  but the one on the right  HAS to go because the binding is broken.  I have hung onto it because of sentimentality, because I bought and fell in love with almost the entire FSG Noonday Press series of Colette series at the Union Bookstore and have read them multiple times.   OH, well, here I must stick with the new version, because the pages are all there!.

I tried to persuade my husband we need a bigger house for our books, but he says I must weed instead.  Too bad.  There are several in the area that have what I want:  three, maybe four floors.  Alas!

10 thoughts on “This or That? Multiple Copies”