“Granted the circumstances surrounding its composition, and the political background of its author, one might expect this novel to be a thinly disguised attack on either Stalinism or the Revolution, but in fact, although much incidental satire on Russian life is used, any kremlinological approach to the deep creative quality of the book would be irrelevant.”
—A TLS review by Edwin Morgan of Mikhail Bulgakov’s The Master and Margarita (December 7, 1967)

I planned to reread Bulgakov’s The Master and Margarita in 2016, the 50th anniversary of its publication. I love anniversaries.  But honestly?  I didn’t enjoy it much the first time.  I’d read it during a four-day power outage:  there was much huddling on the stoop and reading while crossly waiting for the electric company trucks to arrive (we had no superstars on our street to demand “power” quickly), drives to the next town to dine in a lighted place, and the general crankiness that goes with lack of electricity.  So I decided then and there that I didn’t like Soviet literature.

Lo and behold! the TLS recently reprinted a review from 1967, and I enjoyed the reviewer’s condemnation of the “kremlinological approach”(see quote at top of post), and was persuaded to get out my old Everyman copy, a 1967 translation by Michael Glenny.  What a joy to read!

My Everyman copy: no book jacket!

Even if you know little about the Soviet Union, this satirical novel is great fun.  (I waited till after I finished the book to read the introduction).

It is a joyful read.  The language is gorgeous and bold, and there is much humor.  What’s it about?  Well, it’s hard to say.   First,  the devil, disguised as Woland, a mesmerist/professor, and his companions, including a large talking black cat, visit Moscow and terrorize writers and theatrical managers (and audiences).  The devil attacks Soviet atheism:  he assures the writers, much to their shock, that Jesus exists.

Interwoven with the fantastical narrative of Woland’s visit is a very good historical novella about Pilate and Yeshua.   Pilate is haunted by his decision to crucify Yeshua, a perfectly innocent man, who said that he was misrepresented by the muddled Matthew, a disciple who took notes but got everything wrong.

Then there is the story of Margarita, who turns into a witch after invited to be the hostess at the devil’s ball.  Her goal? To rescue her lover, the man she calls the Master, the author of the stunning novel about Pilate, who burned his manuscript and committed himself to a mental hospital.  All comes together in the end:  Woland and his sidekicks fly away with dignity having doffed their absurd human incarnations, the Master and Margarita find rest, and Pilate and Yeshua come together. 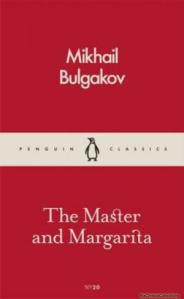 In the 1920s and ’30s, Russian writers were more and more horrifying suppressed  and discouraged from writing satire.   Bulgakov, a novelist and a playwright,  wrote The Master and Margarita secretly and gave it to his wife before he died.  It was finally published in 1966 and translated into many languages.  And in addition to Bulgakov’s  comedy and satire, he conveyed the horror and terror of a totalitarian regime:  many of the characters in The Master and Margarita are driven mad by the devil, and when they try to tell the truth they end up in  the mental hospital.

When the devil/Woland arrives in Moscow, he approaches two writers, Berlioz, a pompous editor, and Ivan Nikolayich, a poet.  As  Woland says one outrageous thing after another, they think he is a spy trying to trick them into saying something forbidden.  Here is an example of the zany dialogue.

“And what is your particular field of work?” asked Berlioz.

“I specialize in black magic.”

“And…and you’ve been invited here to give advice on that?” he asked with a gulp.

Then Woland claims that he is in Moscow to decipher the manuscript of a ninth-century necromancer.

“Aha!  So you’re a historian?”  asked Berlioz in a tone of considerable relief and respect….

…the professor beckoned to them and when both had bent their heads towards him he whispered:

“Jesus did exist, you know.”

“Look, professor,” said Berlioz, with a forced smile, “With all respect to you as a scholar we take a different attitude on that point.”

“It’s not a question of having an attitude,” replied the strange professor.  “He existed, that’s all there is to it.”

“But one must have some proof…” began Berlioz.

“There’s no need for any proof,” answered the professor.  In a low voice, his foreign accent vanishing altogether, he began:  “It’s very simple–early in the morning on the fourteenth of the spring month of Nisan the Procurator of Judaea, Pontius Pilate, in a white cloak lined with blood-red…”

And that is the first line of the novel about Pilate.

A classic! The novel about Pilate is elegaic, strikes a different tone.  I can’t quite put it all together:  but Pilate’s regret is a recurring theme.

10 thoughts on “Mikhail Bulgakov’s The Master and Margarita”