Two English professors, Melvin Jules Bukiet and Lyell Asher, write in The American Scholar that Tolstoy is politically incorrect for students of the twenty-first century. (Was he ever politically correct?)  They say students’ exaggerated consciousness of racism, sexism, LGBT rights, etc., interferes with their ability to read and understand Tolstoy–and, in the age of trigger alerts, they  ask to be excused from class if content offends them.

Thank God they’re not teaching D. H. Lawrence’s Lady Chatterley’s Lover! (John Thomas and Lady Jane would set off trigger alerts.) But, seriously, Tolstoy is one of my favorite writers, and I pray they exaggerate students’ misreadings.

Melvin Jules Bukiet, a professor at Sarah Lawrence, recently reread War and Peace, a novel he has loved since college.  In his essay, “By the Content of Its Characters,” he writes,  “All happy writers may be alike, but nowadays they’re also different in their own special national, ethnic, racial, religious, or sexual ways. Paradoxically, they’ve become individual by category.”

Then he satirizes how Tolstoy could be misinterpreted in the trigger alert culture.

When Pierre Bezukhov, arguably the protagonist in a novel that follows scores of lives, is introduced, he is described as “fat.” Well, that’s a bit harsh, but Tolstoy created Pierre, so if he says the man is fat, he is, and I wouldn’t want a euphemistic translation like “dietarily challenged.” Fat. Fat. Fat.

He  suggests that Pierre today would be considered a pedophile because of his relationship with Natasha; that Prince Andrew Bolkonski  and Count Nicholas Rostov (Natasha’s brother), both officers in the war against Napoleon, are male imperialists;

“and the ultimate class offense finally struck me: nearly every character in War and Peace is noble.”

All right, a little satire goes a long way. 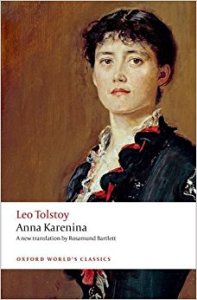 In “Low Definition in Higher Education,” Lyell Asher, an associate professor of English at Lewis & Clark College, says that he has taught Anna Karenina for more than a decade. Students often simplify this long, complex text, believing Anna is right to have an affair because of her passion, and that Karenin is an unfeeling stick figure who deserves to lose her.  They don’t see shades of gray.  (I might add, nor did I when I was young.)

At more than 800 pages, Tolstoy’s saga can invite hurried reading, so a lot of class time is spent applying the brakes: “Not so fast.” “How do you know that?” “What’s it look like from her point of view?” There’s a useful speed bump in that famous first line: “All happy families are alike; each unhappy family is unhappy in its own way.” In its own way. Don’t assume you know who these people are, Tolstoy cautions, however familiar they may seem.

And he goes on to say that college administrators today encourage this over-simplified thinking.

But what happens when the administrators…—sometimes in tandem with professors who teach the courses—pretend to have so mastered the difficult questions of race, of social justice, of meaning and intention, that they feel entitled to dictate to others? What happens when they so pixelate the subject matter that what emerges is a CliffsNotes version of human experience, the very thing that a college curriculum should be working against?

What happens is that many students will accept these simplifications. Some will even cling to them for dear life. Finally a map—with shortcuts!—and a way out of bewilderment. Feeling offended implies an offense, and where there’s an offense there must be a culprit guilty of having committed it. No need to bother with the complexities of context and intention—it says here that “impact” is what matters, that how I feel is what counts. No need to wonder whether an expression of hatred is real or a ruse, isolated or endemic—assume the worst and take the part for the whole.

Well, in my day, we radical students embraced controversy, not whining, and we wouldn’t have accepted pixelated pamphlets on life.   But perhaps these students are not radicals?  Is this the common culture now?

I’m going to blame it on the internet, the way I blame everything else.