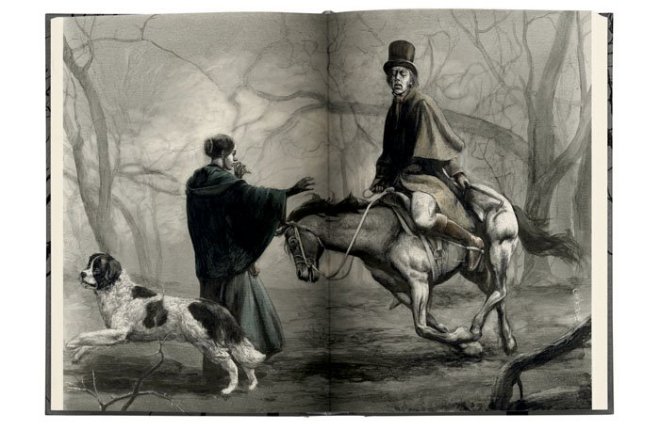 It began with Jane Eyre. We loved her, to a woman. We were convinced that, plain though we were, except when dressed as bridesmaids or in suits for job interviews, we would marry Mr. Rochester.

Perhaps she had a point. We were twentieth-century women—what did we know about the Brontes’ chaste dreams of passion? Charlotte did not marry Mr. Rochester:  she married her father’s curate at the age of 37. Then, alas, she got pregnant and died the next year, apparently of complications in pregnancy.

Most of my friends did marry curates, or the well-educated twentieth-century equivalent, and since we weren’t rich, most of us, at one time or another, were teachers:  like Jane Eyre and Anne Bronte’s Agnes Grey, we taught the children of the rich.  As the years passed, we continued to love Jane Eyre but lost faith in Mr. Rochester.  There but for the grace of God… we said.  Think about it:  Jane married Rochester only after he was “castrated/crippled,” as  the Freudians say.   And then we read Jean Rhys’s Wide Sargasso Sea, a retelling from the point of view of Rochester’s “mad” wife, and it confirmed our suspicions of his character.

In Charlotte’s later books, things were less pat. In Villette, my favorite Bronte novel, Lucy Snowe, a plain Jane Eyre-like heroine, teaches English at a girls’ school in the Belgian city Villette (Brussels), as did Charlotte, as did I (not in Brussels), but she doesn’t get the guy, though I did. Or rather, she doesn’t get the guy she wants. He prefers someone else. And isn’t that the way it would have been for Jane Eyre, a brilliant but plain orphan governess? Only my beautiful friends, the ones who married doctors, would have attracted Mr. Rochester. (There is a pecking order of beauty.)   And beauty is so fragile.  You can be beautiful one year, get sick or unhappy, you lose sleep, and your looks fade.  Just like that.

Villette is a novel for the middle-aged and elderly  Though I appreciated it as a young woman, I revere it now. It is Charlotte’s Gothic masterpiece, a smart un-Bridget Jones study of single life, complete with ghosts, cross-dressing, and drug-induced hallucinations.

But what happens when you’ve read Jane Eyre and Villette over and over and need some Charlotte you don’t know by heart?  You turn to Shirley.   It’s the the plain Jane sister novel, albeit the only one with attractive heroines, and has never been quite weird enough to capture a huge audience in our time.

It should be called Caroline, not Shirley, I’m convinced.  Shirley doesn’t appear till page 204 in my edition.  The real heroine, to my mind, is Caroline Helstone, the blonde, delicate, intelligent young woman, who muses on, of all subjects, being an old maid.

Everyone assures Caroline she will not be an old maid. But she wants to be prepared.  She is in love with her cousin, Robert Moore, a charming, impecunious mill owner, who is determined, despite the levels of unemployment among the men,  to introduce machines into his business.  He is by turns hot and cold with her:  poor Caroline!  He flirts for a few hours then withdraws for days.   And after her uncle/guardian, Mr. Helstone, the clergyman,  fights with Robert about politics, she is forbidden to see him and his sister Hortense. Caroline wastes away—but she is not sure that Robert loved her anyway.

I love a good soliloquy, and what better soliloquy than Caroline Helstone’s musings on being an old maid?  And she is very kind and insightful about two old maids in the neighborhood, who never married because they are ugly and eccentric, and she begins to respect them and to understand their character.

“What was I created for, I wonder?  Where is my place in the world?”

“Ah, I see,” she pursued presently, that is the question which most old maids are puzzled to solve: other people solve it for them by saying, ‘Your place is to do good to others, to be helpful whenever help is wanted.’ That is right in some measure, and a very convenient doctrine for the people who hold it; but I perceive that certain sets of human beings are very apt to maintain that other sets should give up their lives to them and their service, and then they requite them by praise: they call them devoted and virtuous. Is this enough? Is it to live? Is there not a terrible hollowness, mockery, want, craving, in that existence which is given away to others, for want of something of your own to bestow it on? I suspect there is. Does virtue lie in abnegation of self? I do not believe it. Undue humility makes tyranny; weak concession creates selfishness. …”

There’s much more of that, fascinating stuff, and such philosophizing is not so entirely unsuited to our modern day.

Much more lies ahead for Caroline Helstone .  Don’t give up on her yet!

7 thoughts on “Passionate Governesses and Sexy Spinsters: Why We Love Charlotte Bronte”