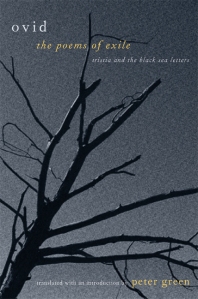 This spring I read and very much enjoyed Ovid’s The Black Sea Letters, Book 1 (Epistulae ex Ponto), in Latin.  Written in exile in Tomis on the Black Sea, this little-read collection of epistolary verse is brilliant and fascinating.

Exiled from Rome in 8 A.D. by Augustus for carmen et error (a poem and an error), the poet Ovid  wretchedly describes his imitation of life in a land assailed by  fierce storms and extremes of temperature.  He lives among the smelly Tomitae barbarians and their bellicose neighbors, the Getae. In his elegiac letters home, he reminds his influential friends that he is the only Roman exile in this barbaric land so far from Rome, and he hopes they will plead his case and hustle him back closer to Rome, if not to Rome itself. He reminds them he was exiled for a fault, not a crime.

Exile also means he has lost the will to write elegantly.  Circumstances are far from ideal.  It’s not as though he has poetry readings, the theater,  or dinner parties to keep him up to snuff.    He has no incentive to polish his writing now.  He is homesick for Rome and the life of a celebrity poet of equestrian rank; he misses his wife and daughter; and may he just mention the horror of  daily deadly faceoffs with bellicose men waving spears.  He reminds his highly-placed friends of their obligation  to him, even though association with him may put them in danger.  He reminds them that his books are not banned:  they are still in libraries in Rome.  Alas, there are no libraries in rough Tomis.   There are no poetry readings, either.

Many writers know what it is to be in exile–and I don’t mean literally.  Many are in exile in the 21st century from the 20th century, when publishing throve, and thus lose the incentive to polish.  Of course Ovid’s apology for his work is merely rhetorical: Roman poets conventionally apologize or their lack of skill, while meaning the opposite.  But many of us do take it literally.  The provincial publications for which gentle housewives wrote book and movie reviews between loads of laundry have “folded.” We may not live in Tomis on the Black Sea–we may live where we have always lived–and because we have always written, we continue to write, but this is the scribble-and-post age.  We polish less.

Anyway, as I read Ovid, I kept putting asterisks and writing “BLOG!” beside passages.

Here is one of my favorites.  In the lines below, Ovid  is depressed.  My translation is slangy, and, sorry, it doesn’t capture the poetry or the literary devices or the tone or reflect the sophistication of rhetorical devices.  It’s all I’ve got. We all do our best, but it’s poetry. Go get the Peter Green if you want elegance.

Publius Ovidius Naso addresses Maximus here (and refers to himself as Naso):

Your old friend Naso—once not the least of your friends—
asks you to read his words, Maximus.
Don’t look for my former flair
lest you seem unaware of/insensitive to my exile.
You perceive how idleness corrupts a slothful body,
just as water, if it is not moving, acquires a taint.
The skill I used to have at spinning poetry
is failing and lessened by neglect.
These things also, which you read, if you believe me, Maximus,
I write forced out with an unwilling hand.

2 thoughts on “How to Get Sloppy: Ovid in Exile”