I love Jane Austen.  But Sense and Sensibility is my least favorite comedy of manners. Is it a comedy at all?  The satire is apparent, but S&S is the least humorous of her books. Yet she establishes her basic themes and tropes here: in later books, especially Pride and Prejudice, she refines and recycles her characters, plot elements, and themes: the devoted sisters and/or friends, the courtiers, cads, the preoccupation with (un)romantic love, and the almighty god of money.

By the way, I’ve been admiring these super-feminine covers of Sense and Sensibility.  I have a row of sedate Penguins, but rather like the pinks, greens, and yellows.   I was not the designers’ audience, but the covers have grown on me.   What do you think? 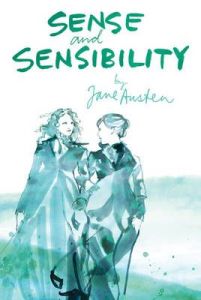 On a recent rereading, I had a strange un-Jane-ish experience.  From the beginning I  felt a hair-raising angst.  The newly-widowed Mrs. Dashwood and her three daughters, sensible Elinor, romantic Marianne, and silly Margaret, must move to a cottage on Mrs. Dashwood’s cousin’s land.  How will they survive on their scant inheritance?   John Dashwood, the girls’ half-brother, has inherited the entailed estate.   In a sharply comic but horrific scene, John’s shrewish wife talks him out of giving them a gift of money that might have made a real difference.

Four women in a country house:  how will the Dashwood sisters ever find husbands?  Sir John Middleton, their mother’s cousin, is jolly and sociable, but perhaps not quite the thing, and his wife, Lady Middleton, is a dull stick.  The heroine, sensible Elinor, who has a long-distance beau, Edward Ferrars, doesn’t dwell much on love:  she is busy.  She must organize the move, plan the finances, advise  her impractical mother, and gently temper the impetuosity of her romantic  younger sister Marianne. While everyone else expresses  emotions, Elinor has to hold everything in.

Much of the book centers on Marianne, as filtered through Elinor’s sensibility. Naturally, seventeen-year-old Marianne falls in love.  Running down a hill in the rain, she sprains her ankle, and a handsome stranger, Willoughby, who is walking the hills with his gun and pointers, carries her home.  It’s a good thing she’s a sylph-like girl, or that might have been awkward.  He is charming, well-educated, literary, and musical:  he and Marianne spend the next weeks together gossiping, reading aloud, playing music,  and taking walks.  But then Willoughby suddenly leaves for London.  Why did he leave?  Why doesn’t he write?

The course of love does not run smooth for the Dashwood women.  Edward Ferrars pays a brief visit, but is gloomy and does not propose.  The manipulative Lucy Steele, a guest of the Middletons, informs Elinor that Edward is her secret fiance.  Marianne has another suitor, Sir John’s suitable friend,  Colonel Brand, but she thinks he’s an old man in his mid-thirties, “old enough to be my father.”   (And isn’t he for someone of her age?)

But there are many hilarious minor characters to temper sense and sensibility: Mrs. Jennings seems absurd to the Dashwoods at first, with her constant teasing about match-making and boyfriends, but turns out to be very kind and much less “common” than is their first impression.  And their visit to Mrs. Jennings in London,  which is disastrous from a romantic point of view, proves to them the worth of Mrs. Jenning’s friendship and support.

Mrs. Jennings, Lady Middleton’s mother, was  a good humoured, merry, fat, elderly woman, who talked a great deal, seemed very happy, and rather vulgar. She was full of jokes and laughter, and before dinner was over had said many witty things on the subjects of lovers and husbands; hoped they had not left their hearts behind them in Sussex, and pretended to see them blush whether they did or not. Marianne was vexed at it for her sister’s sake, and turned her eyes towards Elinor to see how she bore these attacks, with an earnestness which gave Elinor far more pain than could arise from such common-place raillery as Mrs. Jennings’s.

Of course, Austen’s books center on the marriage plot.  The ending is happy, or not happy, just as you like.   Happiness is not the top of the list.  Sense trumps sensibility. Elinor is sensible and rewarded.   Marianne is sensitive, and supposedly marries happily, but one wonders.  Certainly in my youth I was a Marianne, not an Elinor; and found Elinor’s perfect manners and middle-aged restraint irritating, even though she is always right.

But  I cannot quite imagine that either Elinor or Marianne will be very happy in this Comedy of Compromise.  Elinor gets her guy:  let’s hope for the best, as I don’t think he’s worthy of her.  Jane punishes Marianne, as she later punishes Emma–for what?  Being imperfect, being subversive, saying what they think, making mistakes?

But at least the sisters have each other.

Between Barton and Delaford, there was that constant communication which strong family affection would naturally dictate;—and among the merits and the happiness of Elinor and Marianne, let it not be ranked as the least considerable, that though sisters, and living almost within sight of each other, they could live without disagreement between themselves, or producing coolness between their husbands.