Drink a glass of water before you read this, because it’s very, very hot.

So far this month we have had 13 days in the nineties.   It was 90 degrees when I took my bike ride this morning and it was 95 when I got home.  And so I flopped down in the decadent air conditioning and made a list of:

WHAT TO READ IN THE HEAT!

1. Heat and Dust by Ruth Prawer Jhabvala.  Jhabvala won the Booker Prize for this stunning novel. I am lazily borrowing the Goodreads description:

“Set in colonial India during the 1920s, Heat and Dust tells the story of Olivia, a beautiful woman suffocated by the propriety and social constraints of her position as the wife of an important English civil servant. Longing for passion and independence, Olivia is drawn into the spell of the Nawab, a minor Indian prince deeply involved in gang raids and criminal plots. She is intrigued by the Nawab’s charm and aggressive courtship, and soon begins to spend most of her days in his company. But then she becomes pregnant, and unsure of the child’s paternity, she is faced with a wrenching dilemma. Her reaction to the crisis humiliates her husband and outrages the British community, breeding a scandal that lives in collective memory long after her death.”

2. Dune by Frank Herbert.  Dune, the winner of the Nebula and Hugo Awards in 1966, is an ecological classic.   As I said here last year:  ” It is, to a large extent, about the politics of water. Water is the most precious commodity on the planet, though the ruling class are never dehydrated and live in luxury.  The native Fremen in the desert must wear “stillsuits” that recycle every drop of sweat and urine while they travel or work in the spice mines.  When someone dies, the water is taken from the body to be reused, because 70% of the body is water.  Plastic dew collectors save every drop of condensation for growing plants. Dangerous sand and dust storms blow up to 700 kilometers an hour and ‘can eat flesh off bones and etch the bones to sliver.’  There are also giant worms.  But the planetologist, who knows exactly how much water is needed to make the planet green over the next few hundred years, teaches the people how to change.”

3. The Member of the Wedding by Carson McCullers.  This is the 100th anniversary of McCullers’ birth, and this is my favorite of her books. Set in the South during the summer, you will feel the sweltering weather!   The Goodreads description says:  “Here is the story of the inimitable twelve-year-old Frankie, who is utterly, hopelessly bored with life until she hears about her older brother’s wedding. Bolstered by lively conversations with her house servant, Berenice, and her six-year-old male cousin — not to mention her own unbridled imagination — Frankie takes on an overly active role in the wedding, hoping even to go, uninvited, on the honeymoon, so deep is her desire to be the member of something larger, more accepting than herself. “A marvelous study of the agony of adolescence” (Detroit Free Press), The Member of the Wedding showcases Carson McCullers at her most sensitive, astute, and lasting best.”

4.  The Raj Quartet by Paul Scott.  I love Scott’s brilliant quartet!  As Goodreads says, “richly recreates the last days of India under British rule–“two nations locked in an imperial embrace”–as Paul Scott’s historical tour de force, ” The Raj Quartet.” “The Jewel in the Crown” opens in 1942 as the British fear both Japanese invasion and Indian demands for independence.

I blogged briefly about the first book in the quartet, The Jewel in the Crown, here.

These are first editions. I wish I had these…

5. The Alexandria Quartet by Lawrence Durrell.  I wrote about this remarkable tetralogy here in 2015:  “In Durrell’s  gorgeously-written, percipient tetralogy, Justine, Balthazar, Mountolive, and Clea, the prose is moody and lush.  The narrative is psychologically-oriented and fragmented. Over the course of the quartet, Durrell’s narrator, Darley, reiterates and augments a series of events in the lives of his lover Justine and a group of friends in Alexandria, Egypt.  Other characters, particularly Balthazar and Clea (Mountolive is the hero of the prequel), contribute their viewpoints, so that a clearer picture is revealed.  Published from 1957 to 1960, these books are elegant but occasionally too flowery.   In the ’50s, Durrell’s poeticism flourished.  I love every word!”

6.  Dante’s Inferno.  The first book of the Divine Comedy is the powerful poetic narrative of Dante’s finding himself in “a dark wood” in the middle of his life, and  Virgil guiding him on a tour of the nine circles of hell.  A good companion book to Dante’s masterpiece is Erich Auerbach’s Dante: Poet of the Secular World (NYRB) 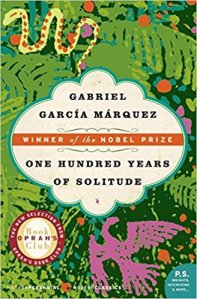 The story follows 100 years in the life of Macondo, a village founded by José Arcadio Buendía and occupied by descendants all sporting variations on their progenitor’s name: his sons, José Arcadio and Aureliano, and grandsons, Aureliano José, Aureliano Segundo, and José Arcadio Segundo. Then there are the women–the two Úrsulas, a handful of Remedios, Fernanda, and Pilar–who struggle to remain grounded even as their menfolk build castles in the air. If it is possible for a novel to be highly comic and deeply tragic at the same time, then One Hundred Years of Solitude does the trick. Civil war rages throughout, hearts break, dreams shatter, and lives are lost, yet the effect is literary pentimento, with sorrow’s outlines bleeding through the vibrant colors of García Márquez’s magical realism. Consider, for example, the ghost of Prudencio Aguilar, whom José Arcadio Buendía has killed in a fight. So lonely is the man’s shade that it haunts Buendía’s house, searching anxiously for water with which to clean its wound. Buendía’s wife, Úrsula, is so moved that “the next time she saw the dead man uncovering the pots on the stove she understood what he was looking for, and from then on she placed water jugs all about the house.”

8. The Sheep Look up by John Brunner.  l wrote last year  (and you can read the rest of the post here):

In this terrifying post-modern literary SF novel,  pollution has rendered the U.S. practically a wasteland.  The poisoned air blows into Canada and sometimes across the ocean to Europe (sound familiar?);  everyone is sick; antibiotics no longer work; fleas and rat infestations in houses and apartment house can no longer be controlled because they are immune to poison; the acid rain in NY is so bad that you need to wear plastic outside; the water is poisoned (there are frequent “no-drink water” days); intelligence levels are dropping (lead in the air and water); a virus causes spontaneous abortion; the oceans are so polluted that people vacation in Colorado rather than California; and big businesses are profiting by selling air filters, water filters, etc. 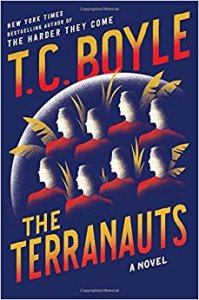 9.  The Terranauts by T. C. Boyle.  Boyle’s brilliant novel was based on an actual experiment in Arizona.   Here’s a paragraph form the Goodreads description:  “It is 1994, and in the desert near Tillman, Arizona, forty miles from Tucson, a grand experiment involving the future of humanity is underway. As climate change threatens the earth, eight scientists, four men and four women dubbed the “Terranauts,” have been selected to live under glass in E2, a prototype of a possible off-earth colony. Their sealed, three-acre compound comprises five biomes—rainforest, savanna, desert, ocean and marsh—and enough wildlife, water, and vegetation to sustain them.”

10.  Flight Behavior by Barbara Kingsolver.  I blogged about this wonderful novelin 2013:  “When Barbara Kingsolver’s novel, Flight Behavior, was published last fall, critics asked if it was possible to write a good novel about climate change.  Having inhaled this stunning literary novel in two days, I can answer, Yes, it is.  Kingsolver boldly interweaves the science and politics of climate change with the everyday lives of a struggling family.  She creates a plausible fictional overview of a  problem that will not go away.”
You can read the rest of the post here.

And what are your favorite books to read in the heat?

6 thoughts on “What to Read in the Heat!”