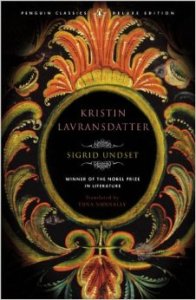 Brad Leithauser’s introduction to Undset’s Kristin Lavransdatter is a classic.

Do you read introductions to books?  Some are absorbing, some very dull.  Yes, I read them after I finish the book, unless I want specific information about the author’s life or to read a bit about a historic period.

The blogger Karen of Booker Talk recently wrote a fascinating article on introductions, inspired by Elisa Gabbert’s essay in the Paris Review, “On the Pleasures of Front Matter.”  Elisa Gabbert has an interesting take on introductions: she sometimes prefers them to the books.  She writes, “…I’m a promiscuous and impatient reader, so one of my literary guilty pleasures is reading the introductions to great books and not the books themselves.”

lt seems  odd, doesn’t it?  I’m more of a book person than an introduction person.  Gabbert admits she has not finished the Tao Te Ching or An Introduction to Wittgenstein’s Tractatus, but she has read the introductions multiple times.

I understand what she means about introductions to nonfiction, especially biographies.   Quite often an author of a biography will summarize the book in the introduction. And if the lazy reader also peruses the final chapter, another summing up,  he /she can  pretend to have read the book.  I don’t recommend it.

For years I skipped introductions. You don’t always need them, though scholars need the work, and may they always have it. These days I find them very useful for reading poetry, though I do prefer books about the poets: Gilbert Highet’s 1957 classic, Poets in a Landscape, captures the atmosphere and influence of place on the Roman poets better than any fusty introduction.

As for novels, you don’t always need introductions.   I happily galloped through Susanna Rowson, Henry Fielding, Jane Austen, the Brontes, Hawthorne, Melville, Trollope, Dickens, George Meredith, Elizabeth Gaskell,  Thomas Hardy, E. M. Forster, Virginia Woolf, F. Scott Fitzgerald, etc., etc. without so much as a glance at the introductions.  By osmosis I knew about the Brontes’ seemingly narrow life at Haworth, which they illuminated and showed the importance of by their insightful writing.  I knew that  E. M. Forster was gay, and that Virginia Woolf committed suicide.   As for politics in Trollope’s Palliser series, and the factory conditions described in Bronte’s Shirley and Gaskell’s North and South and Mary Barton, I picked up enough to follow the novel.  It’s like learning a language:  the more you read, the more you pick up.

In recent years, I have read many introductions to Penguins and Oxfords, partly because I  have more leisure.  What do I like in an introduction?  I prefer liveliness, but scholars do not always have that quality.   The novelist Brad Leithauser’s introduction to the Deluxe Penguin edition of Nobel Prize winner Sigrid Undset’s Kristin Lavransdatter is one of the best.  He interweaves personal anecdotes with the traditional historical background and literary criticism.

In the first two paragraphs he writes,

My first foray into the world of Kristin Lavransdatter, the Nobel Laureate’s celebrated trilogy of novels set in fourteenth-century Norway, turned out to be a reading experience like no other. I’m thinking here less of the books themselves (though these were an unexpected delight, a convincing twentieth-century of medieval Norway) than of the personal encounters the books fostered.

The trilogy runs over one thousand pages in the old three-in-one Knopf hardcover I’d picked up secondhand, and I chose to read it slowly, for weeks on end, lugging the hefty, handsome volume everywhere I went.  One of its themes is the stubborn power of magic–the bewitching allure of pagan practices in a society that had officially but not wholeheartedly embraced Christianity–and the trilogy did seem to work magical effects:  it drew elderly women to me.

This is the kind of charming introduction you can read over and over.

One day I found an unusually well-written and engrossing introduction, and when I skipped back to the title page, thought, No wonder.  It was Margaret Drabble.

12 thoughts on “Are Introductions Necessary?”