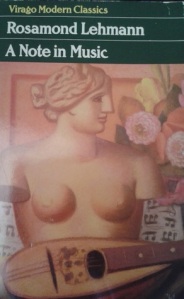 Rosamond Lehmann’s A Note in Music, published in 1930, is the best novel I’ve ever read about being in one’s thirties.  Lehmann has a bleak take on women’s lives: there you are, married, bored, an infertile woman or a busy mother, reading novels, repeating the same monotonous tasks every day, and will you ever accomplish anything?

Lehmann does not exactly describe my experience, but as I read this stark novel I recognized the characters of Grace Fairfax and Norah MacKay.  They live in a bleak northern city, with grim weather and very little culture.   The two were lively and happy when they became friends 10 years ago, after moving with their husbands to the unnamed northern city, but their friendship has never progressed, and their marriages have deteriorated.

Life is so hard for Grace that we frantically want to help her. She is in her mid-thirties and very depressed.  She despises her husband Tom, a good-natured, if rather Babbitt-like businessman, who uses words like “gentleman” and “civil.” She spends her days reading novels while the maid, Annie, does the housework.  She longs to go back to the country where she grew up, and truly suffers over the lack of greenery and plants.  And, tragically, she gave birth to a stillborn baby. And  her puppy died.  She imagines a fortuneteller saying to her, “This is a most curious case.  There is nothing here:  nothing in your past, nothing in your future.  As for character–lazy–greedy–secretive–without will or purpose.”

Norah is a more cheerful, active woman, the mother of two sons, and a joiner of committees.  But her husband, Gerald, a university professor, is very difficult, and she must assess his moods constantly.  (He seems to be clinically depressed.) Sometimes she can calm him down, other times not.Certaintly this is not the marriage she wanted, but the man she’d loved died in the war.  (And from the sound of it, he was just as difficult as Gerry.)

What happens to these women?  A young Oxford-educated man, Hugh Miller, comes to town to work in Tom’s office.   He is so charming, so attractive, so seemingly happy, that both Grace and Norah quietly fall in love with him.  Partly it is because  he is younger:  he reminds them of their lost hopes.  He has traveled and lived all over the world, and he does not have to stay in  this town.   And when his sister Clare, an old friend of Norah, comes for a visit, they all spend a magical day in the country.

Hugh is not as carefree as he seems:  he is homosexual, and his lover, Oliver, dumped him.   I feel compassion for these women falling in love with a kind, courteous, lively gay man.   They have so little experience:  it never occurs to them.  But what they see as Hugh’s happiness helps them in their own marriages.  Grace and Norah may never be happy, but they begin to look at their marriages differently.

Lehmann’s writing, and her frank, vivid portraits of the characters, make this book a gem. Here is a passage about Grace’s longing for the country.

The country haunted her still, she said to herself:  not a day passed without bringing some picture remembered or imagined.  Dawn and sunset were not in these skies, behind the slate roofs and red brick chimneys of the residential quarter–but in her mind’s eye, over country spaces; and spring and autumn still made her sick for home.  How many times had she not thought of the summer evening when a bird had sung in the poor lilac tree in the front patch?…  But that would never happen again, as the trams came to the end of the avenue.

As a person who  struggles with northern weather and sunless days–thank God I left the north!–I do understand this homesickness and longing for nature.  And I am just grateful that Grace finally gets a breath of air.

A great book!  Odd how modern this seems, even though today more women are in the workforce.

9 thoughts on “Rosamond Lehmann’s “A Note in Music””