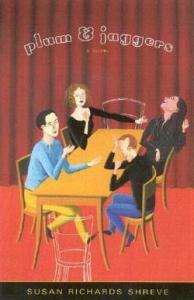 Plum & Jaggers is a cult classic about comedy, though it is not a comedy. A sibling comedy troupe is born out of family history, in this case the survival of a terrorist attack.  The novel, which begins like a children’s book, morphs into a surreal fable about remoteness and tragedy.   The McWilliams children, Sam, Charlotte, Oliver, and Julia, are on a train to Rome in 1974 when a bomb explodes in the dining car, where their hippie parents are picking up lunch.  The children, especially seven-year-old Sam, the oldest, are  traumatized by the loss of their parents. Sam spends his childhood and much of his adulthood controlling and protecting his siblings.  He begins to write comedy as an adolescent, to entertain his friends at the reform school he is sentenced to for stealing materials to build a bomb shelter. Later,  he is expelled from a Quaker day school for writing plays instead of doing school work.

Before I go further, I must say that this is a very odd book.  Published in 2000 and marketed as an adult novel, it was reissued in 2013 in Nancy Pearl’s excellent Book Lust Rediscoveries series (published by Amazon).  Goodreads readers like it, but The New York Times slammed it:  my guess is that the reviewer didn’t know what it was.  Do I?  The first part, when the children move in with their grandparents, almost reads like a children’s book.  And then it is a distanced, surreal response to terrorism, when they are in their twenties and perform their comedy act, even opening for Second City.  The set is a dining room, with the family sitting around a table with two empty chairs for their absent parents, nicknamed Plum and Jaggers. There is also an unexploded pipe bomb underneath the table.

All the siblings have coping mechanisms, though they seem never to grow up:   Charlotte is an addicted reader, escaping through Anna Karenina; Oliver is the normal, popular guy who graduates from college and has a girlfriend; and Julia, a stubborn, self-willed free spirit, is happy working as a barista and actress, though she wonders why they all have to live together.

As adults, when they move to Chicago and perform at small comedy clubs, they are invited to open for Second City.  Sam asks what they think of their billing.

“Thank you, Charlotte,” Sam said, a rare happiness building like fever, a lightness in the fetid summer air that was almost joy. “Joy.” What a lovely word, he thought, like bells. A pure sound undiminished by the thickness of the air. His team. His troupe. Plum & Jaggers on the lips of people as they left the theater.

In many ways, they are always dealing with terrorism: there is a bomb on the Metro, Sam corresponds with a woman who lost her husband and son during a bombing in Israel, and then a stalker threatens their comedy troupe.  And Sam can’t let them go.  Their relationship is so dysfunctional, but I like Sam, as do his siblings.  The comedy grows darker and darker–too dark.

Susan Richards Shreve writes in the preface, titled “To David Sedaris,”  that she was on a train to New York when she got the idea for the novel. But the sibling comedy troupe was inspired by an article she read about David Sedaris’s comedy act with his sister, Amy Sedaris, before he became famous.  In New York she  met with him and chatted to him about comedy, which grew out of “mainly delicious family stories, darkly funny, wicked, and generous. Quotidian life with all its exasperations, pratfalls, and missteps, its small and enormous hurts.”

Although Plum & Jaggers is not my favorite of Shreve’s books–that would be Queen of Hearts, which I wrote about here–I enjoyed it very much.  She is a graceful, thoughtful writer.  And I will read it again, as I do all her books.