“We will need writers who can remember freedom.”
—Ursula K. Le Guin’s 2014 speech at the National Book Awards

I wrote here a few years ago that Ursula K. Le Guin should have won the Nobel Prize.

In her honor, I am reprinting my post about The Unreal and The Real:  Selected Stories of Ursula K. Le Guin.  This two-volume collection was published in 2012 by Small Beer Press and reissued in 2016 by Saga Press.

Ursula K. Le Guin was the first science fiction/fantasy writer I read as an adult.  Growing up, I read E. Nesbit’s books, Jonathan Key’s The Forgotten Door, and A Wrinkle in Time over and over, but then I gave up genre fiction. Later, in my twenties, a friend recommended  Le Guin’s The Left Hand of Darkness, and I was amazed to discover parallels between her work and literary writers like Borges and Calvino.  Several of her novels and story collections are also reminiscent of Doris Lessing’s, or vice versa.

For those of you who don’t know her work, I would put her in line for the Nobel Prize for Literature, except that it seems no American writer will ever win the Nobel again.

Small Beer Press recently published two volumes of Le Guin’s stories, and I was eager to read them.  I read the second volume first, because it is a collection of her science fiction and fantasy stories, selected by Le Guin herself, while the first volume, Where on Earth, spotlights her more “realistic” fiction.  (And perhaps I’m not quite as interested in that.)

Le Guin writes in the introduction of Vol. 2:  Outer Space, Inner Lands about the blurring of boundaries between genre fiction and literature.  She writes about the  relationship between myth, legend, science fiction, fantasy, and magic realism.

She says of genre:

“Genre, a concept which could have served as a useful distinction of various kinds of fiction, has been degraded into a disguise for more value-judgment.  The various “genres” are now mainly commercial product-labels to make life easy for lazy readers, lazy critics, and the Sales Departments of publishers.”

“It’s not my job as a writer to make life easy for anybody.  Including myself.”

Many of Le Guin’s powerful books could be cross-listed as SF/fantasy and literature, but, with the exception of Lavinia, her historical novel about he Italian princess who marries Aeneas (in The Aeneid), I have found all of them in the SF section.  Booksellers shelf Doris Lessing’s science fiction in the literature section, because she began as a literary writer, but Le Guin, best known as an SF writer, and remarkably fluent,  doesn’t get the same courtesy. 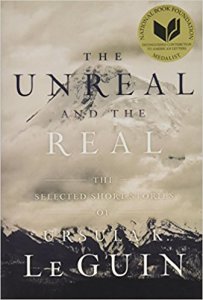 There are many different kinds of stories in Outer Space, Inner Lands. Some of them take the form of ethnological reports on other planets.  In “Solitude,” an ethnologist and her two children, Borno and Serenity, spend several years on Eleven-Soro.  Narrated many years later by the ethnologist’s daughter Serenity in the form of a report, the story melds Serenity’s happy memories of her own coming of age with her mother’s sadness and isolation.  Serenity, who was a young child when they moved there, was accepted by the inhabitants of the “aunt-ring,”  learned the songs and stories the women told, and had an opportunity to “make her soul.”  Her mother was not allowed to attend their singing/storytelling sessions.

Serenity learned above all to avoid magic, tekell, “an art or power that violates natural law”:  the technology on her home planet, or even just one person trying to dominate another.   Her mother calls this superstition, but to Serenity it is common sense: even in marriage, there is tekell, because one person can control the other.   “You have no power over me,” she says to her mother when they want to take her back to their home planet.

The family cannot stay together on the planet.  Borno must leave with the other boys in adolescence to live away from women and jostle for power.   He sticks out the violent life for one year, then comes home and tells his mother he wants to go back to their planet.  Serenity’s dilemma is that she loves her family but utterly believes in the society she has been brought up in.

In another thoughful,  gripping story, “Nine Lives,” two men, Pugh and Martin, have been alone on Libra Exploratory Mission Base for years.  Their first glimpse of a member of an incoming support team on a video communicator floors them:  “Do they all look like that?  Martin, you and I are uglier than I thought.”

Le Guin writes about the difficulty of meeting strangers.  It is particularly tough for Martin and Pugh, alone for so many years.

“It is hard to meet a stranger.  Even the greatest extravert meeting even the greatest stranger knows a certain dread, though he may not know he knows it.  Will he make a fool of me wreck my image of myself invade me destroy me change me?  Yes, that he will.  There’s the terrible thing:  the strangeness of the stranger.”

But it is even more disturbing when  a support team emerges from the ship, and they are shocked to see  five men and five women clones–a tenclone. Later, nine of the clones die in a horrible earthquake, and the tenth, who almost dies, is in deep shock. He gradually learns from Martin and Pugh that doing the safe thing is not always the wise thing.  Breaking the rules can help one survive.

In my favorite story, “Betrayals,” an elderly woman has retired to a hut outside a remote village to meditate and learn to die.  She reads about a planet where there is always peace,  takes care of a dog and cat, and allows a Romeo-and-Juliet-type couple to take refuge in her house occasionally for love. But then she discovers that her neighbor, the Chief, a former tyrannical revolutionary leader who served time in prison, is ill with a cough that develops into pneumonia.  She doesn’t want to help him–she doesn’t care for him–he is there to die–but a lifetime of habit makes it necessary to do all she can.  She learns about the versatility of human beings, and that neither she, nor the chief are ready to die.

A remarkable collection.  My favorite of her books is The Birthday of the World and Other Stories (2002).  What are your favorites?

9 thoughts on “The Unreal and the Real: Selected Stories of Ursula K. Le Guin”