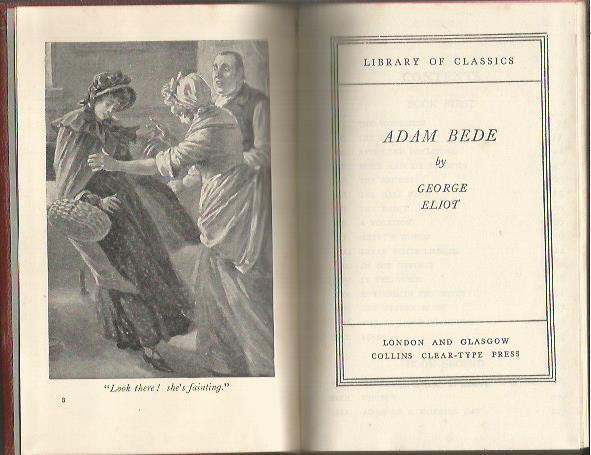 Is George Eliot still read?  I don’t mean Middlemarch:  yes, we all read Middlemarch.  But  are her other novels read as voraciously as they used to be?  My grandmother kept Eliot’s books in the glass-fronted bookcase next to the fireplace.  I’d take them out and read bits of them on rainy afternoons.  Perhaps they were Book-of-the-Month selections; she also subscribed to the Literary Guild.  Her preferences were for Adam Bede and The Mill on the Floss.  Honestly, those are the only two I remember reading. Perhaps they were the only ones I could understand.

Recently I’ve been rereading Eliot’s Adam Bede (1859).  Beautiful, fluid writing, and Eliot wrote about the rural poor from her unique point of view as the daughter of a carpenter. The novel, set in 1799, was partly a homage to her father, upon whose character Adam Bede was based, partly to her aunt Elizabeth, an itinerant Methodist preacher before her marriage, who is portrayed as Dinah Morris, also a Wesleyan preacher.

Not all are as noble as Adam and Dinah.  The anti-heroine, Hetty Sorrel, the beautiful, vain, unintelligent niece of a farmer, is seduced by Arthur, the squire’s nephew.  Later, she agrees to marry Adam, but she is pregnant and ashamed, so flees before the wedding, trying in vain to find Arthur. Eventually Hetty is  imprisoned for infanticide.  Who stands by her?  Her cousin, Dinah.

The plot was inspired by a story Eliot’s aunt’s told: as a preacher, she had spent a night praying in the cell of a woman condemned to be hanged  for killing her child.   In Adam Bede, Eliot weaves the story of this persecuted and prosecuted 18-year-old  silly girl into the web of intricate inter-class relationships between rich and poor, judges and peasants, men and women, clergymen and women preachers, and, perhaps most important, women and women.  All are threatened by Hetty’s condition and lack of remorse.  When it comes down to it, women immediately understand what has happened to Hetty, and are usually more sympathetic.   Arthur is to blame.  Adam, too, understands it.

Eliot is not only a realist who wrote lifelike country characters, but her dialect is also pitch-perfect, i.e., convincing and comprehensible.  And Eliot is so intellectual that there are a dizzying number of references to other novels in Adam Bede.  And the name Hetty is rich in associations:  we think of Hester Prynne, the heroine of Hawthorne’s The Scarlet Letter, who is sentenced to wear a scarlet letter for adultery and for not naming the father of her illegitimate child.  Hetty also recalls Esther in Bleak House,  the lovely, graceful, illegitimate daughter of Lady Dedlock.  Lady Dedlock runs away to save her husband and Esther from being hurt by her secrets. And her long ,terrible journey is not unlike Hetty’s, while Esther and Inspector Bucket search high and low.    And let us not forget Elizabeth Gaskell’s Ruth, the story of a pregnant orphaned seamstress who manages to make a life for herself.

So did you pass on your love of Eliot to your progeny, or progeny’s progeny?  No?  They only read Y.A. books about faerie and vampires and elven kings?

“They’re always on the phones. They take pictures all day and post them.”

“Take a picture of her reading George Eliot”

“It’s the only thing you haven’t tried.”

You have a perfectly nice-looking goddaughter, but unfortunately she is coming down from coke and is either running up and down the halls in rehab or  crying in the shower.  And then at the end of this pricey day in psych day care she comes home with ceramic figurines and laughs hyserically.  And then she runs around the block.

“Why is this dwarf orange?”

“I try to get out of crafts–but then they call me uncooperative..  So I painted it orange.”

I say Bye and go home to finish Adam Bede.