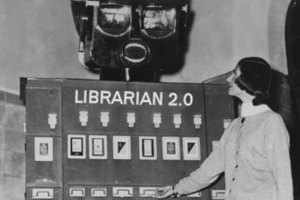 I have been literally “under the weather”:  with single-digit temperatures, I don’t feel like going out.  Finally it warmed up a bit, so I bundled up in sweaters, parka, and boots and walked to the library.  I longed to sit in a comfortable chair by the (electric) fire and read The New York Times Book Review.

First, I had a long conversation with the “Robotic Librarian” at the check-out desk:   she is probably not a librarian, but she is robotic.  She told me I should renew my overdue DVDs.   I said that I had renewed them twice (the library’s limit) and my husband had returned them.  She said again, “You should renew them.” I explained again we had returned them.  Finally I asked,  “Are you saying you want to renew them?”  She said, “No, they’ve been returned.”

Then I headed towards the books and reading room. Nothing is where it should be.  Here, the Nobel Prize winner Kazuo Ishiguro’s novel The Buried Giant is shelved in the SF section.   Eleanor Catton’s Man Booker Prize-winning The Luminaries is in the mystery section.   And The New York Times Book Review,  which used to be  between The New York Review of Books and The New Yorker, has disappeared in Library Hell.

The worst problem for me at this library is the five-year-weeding policy. Yup.  I am sure there are good librarians who cheat on the policy and preserve books, but Europas,  NYRB books, and Library of America editions have been known to bite the dust.  I have little chance of finding anything I will read.  Today  I looked for Pulitzer Prize winner Alison Lurie’s The War Between the Tates.  Nope, they don’t have it. How about Judith Rossner’s Emmeline, recently reissued by Persephone? Nope. Anything by the great Hortense Calisher? No, of course not.

Do you want to know what they have?  Three bookcases of Danielle Steel.

By the way, The New York Times and The Washington Post now review Steel’s books.   Oimoi!  Talk about dropping standards.