I learned three “B’s” on a recent trip to London:

The first “B.”  At different ages, we view the concept of safety differently.  One night when I was a young woman, I went out and screamed at the noisy junkies in the alley behind our house.   May  I just say, Thank God they ignored me! I didn’t understand the situation. Still, you can find yourself in that situation again.

The hotel in London was seedy.  (The pictures lied.)   I arrived at midnight, too tired to find another hotel, and checked in with great trepidation.  I looked incredulous when the  desk clerk told me I had to go outside to another building.  He escorted me, but was obviously terrified of the people on the street:  a sensible reaction.  I wanted to say, “Don’t show fear!”  And I was sorry that he had to trek back by himself.

How unsafe was it?  I thought, well, it’s only for a few nights. But the next night someone climbed the stairs at midnight and pounded on the door.  I sat very still and hoped he’d go away. Eventually, he did.

The next day I schlepped my suitcase on the tube and went to a relatively “luxurious” hotel where I had stayed before.  I enjoyed the rest of my trip. 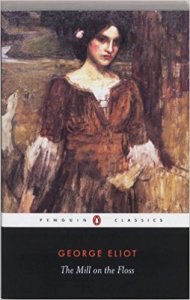 The Second “B.”  Bring your own book, or e-reader. When the weather is slushy and you tire of looking at portraits of the Tudors, go to the British Library and look at the manuscript of George Eliot’s The Mill on the Floss. I was thrilled. Then sit down (if you can find a chair) and read it on your  e-reader.  (N.B.  The terrace in front of the British Library was cordoned off like a crime scene because of the snow.  Being an American, I thought this was funny.)

Though I brought my own books, I also went to bookstores  My two favorites are  the flagship Waterstones in Picadilly; and next door is Hatchards,  founded in 1797.

I finished five books in London, a record for me.  (The weather was bad, so I had lots of reading time!)  I read Rumer Godden’s Kingfishers Catch Fire (her best book), Virginia Woolf’s A Common Reader, Virginia Woolf’s The London Scene, Susan Hill’s Jacob’s Room Is on the Landing, and Annette Williams Jaffee’s Adult Education.

The Third “B.”  London has the best art museums.  But you know what? I often enjoy the free exhibits more than the ticketed ones.  That’s because the paid  exhibitions are crowded.  On a quiet weekday I enjoyed Julia Margaret Cameron’s portraits at the “Victorian Giants: The Birth of Art Photography” exhibition at the National Portrait Gallery, but the Royal Academy of Arts was so crowded on a weekend that  I couldn’t get close enough to see the paintings in the  “Charles I:  King and Collector” exhibition.

What I learned?  Pick your times. Meanwhile, see many of the greatest paintings in the world for free.