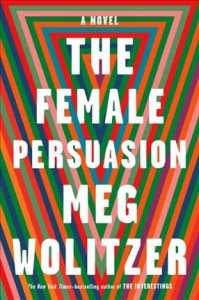 And yet I bought a copy of Meg Wolitzer’s The Female Persuasion, even though I had doubts.  I wanted to tune out mindlessly for an entire freezing-cold April Sunday by escaping into a book, and why not the latest must-read best-seller?

Mind you, The Female Persuasion is hailed as  the novel that represents the #MeToo movement, which at our house we call#WhoHasn’tBeen?  Yes, sexual harassment is a terrible thing, but  #MeToo has resulted in the mass infantilization of American women.   Rather than organize assertiveness training, self-defense classes, and lobbying to change laws, sniveling on Twitter is the new vogue. Do you feel that you’re living through the Russian Revolution?  (I’ve been reading Janet Fitch’s stunning novel, The Revolution of Marina M.)

Wolitzer is usually a very smart writer, but The Female Persuasion is uneven and sometimes preachy.  We meet the heroine, Greer, when she is a whiny college freshman.  One of the two smartest students at her high school (the other was her boyfriend, Cory), she got into Yale but received no financial aid, because her stoner father hadn’t known how to fill out the application properly and left parts blank.  She ends up at Ryland College with a full scholarship, disappointed and angry.  It’s  like the Gilmore Girls, when Rory doesn’t get into Harvard and has to go to Yale instead as a legacy student.  Except the fictional Ryland College is really nowhere, I guess.  Life is hard!  As Greer sulks and fumes, I figured out what no reviewer told me: THE FEMALE PERSUASION IS A CHILDREN’S BOOK!

The first chapter starts well, as Wolitzer, with her trademark wit, reveals that a Gloria Steinem-style feminist named Faith Frank gives a lecture at the college and is impressed with Greer when they chat afterwards. But then Wolitzer backpedals away from adulthood, and we spend 100 pages stuck in an adolescent novel, where sulky Greer, who has no social skills and mopes in the lounge on Saturday night, has an epiphany at a frat party when an obnoxious frat boy, Darren, gropes her.

She is drunk, she tells Darren that she was supposed to be at Yale instead of Ryland, he thinks she’s joking, and then he runs his hand up her shirt and encircles her breasts.  When she jerks away and says No,  he tweaks her breasts painfully.  And she is stunned, because no one has ever touched her like this.

And Darren, the nasty groper, goes on to grope other women as the semester progresses, and eventually assaults a woman.  The college does not deal with this satisfactorily, in the women’s eyes–he must attend some counseling session–and Greer and Zee try to keep a movement going to expel him.  The girls make T-shirts with pictures of Darrell but everybody except Greer and Zee have moved on:  only five people accept the free t-shirts.

The feminist Faith Frank gives Greer the advice I would have given.

“It sounds like you already did what you could. You made your point. If you seem to be hounding this person, then sympathy will redound to him. It’s too much of a risk to take.” She took a second. “And also, what about the other women who are involved? Do they want this revisited?”

“Two of them said they definitely don’t,” Greer admitted. She hadn’t thought about this much, but now she remembered what Ariel Diski had said. “They just want to forget about it and move on.”

“Well, they get a say, don’t they? Look, there’s a whole world out there. Lots to see, lots to be angry about and cry about and do something about, well beyond the bounds of this campus.”

But here’s the thing. It is difficult to understand how a college student who has stoner parents, who has never been coddled, and who is has been sexually active since she was 17, can be so naive. Greer claims she has no outside voice, but this is untrue:   she does have a very strong voice and impresses Faith the famous feminist.  In retrospect, I wonder why young women today are portrayed as less powerful than we felt in the late 20th century.  Who told us it was dangerous for women to go to frat parties?  How did we know this?  Hip feminists simply didn’t want to go to frat parties!  So I have to think this part of the book is didactic: (a) don’t go to frat parties! and if you do (b) file a complaint.

Throughout much of the novel, the issues get in the way of the narrative.   Wolitzer outlines the plot and tell us what to think, instead of developing characters and painting sharp, vivid scenes. (In the “show-don’t-tell” universe, she favors telling rather than showing.)

At the beginning of Part 2, Greer is on her way to interview for a job at Faith’s magazine, which Greer considers outdated. I immediately predicted rightly that Greer would  (a) break with Faith, and (b) develop her own style of feminism.  And I knew somehow  that nasty Darren would be back.  Yes, he is.

Greer writes a best-selling book called Outside Voices.  Can anything be more infantilizing than that title?

As I read this, knocking back a Scotch, I was reminded of Verena Tarrant in Henry James’s The Bostonians.  Verena is the protegée of a feminist, Olive Chancellor. there is a tug of war for her soul between Olive and her cousin Basil Ransom, a handsome man who falls in love with Verena.  The two books aren’t much alike, because James satirized feminism, but  Greer is so naive that she is a kind of Verena.

After finishing The Female Persuasion, I found  myself wanting to revisit college novels about grown-up women:  Mary McCarthy’s The Group, Pamela Dean’s Tam Lin, and Susan Choi’s My Education.

I do think The Female Persuasion would appeal to the Y.A. crowd!  But I wonder how much of this novel was rewritten to fit the #MeToo movement.  I really have enjoyed Wolitzer’s other novels, especially The Interestings.

6 thoughts on “The Infantilization of Women: Meg Wolitzer’s “The Female Persuasion””